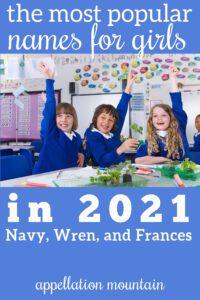 What were the top girl names 2021 for Appellation Mountain?

First up: this is a quirky, idiosyncratic list. It bears very little resemblance to the actual US popularity data.

Partly because Appellation Mountain readers tend to be ahead of the trends. Your favorite names will be everybody else’s favorite names, too … sometime around 2029.

And partly because it reflects the interests and curiosities of this community. Phryne always fares well on this list, thanks to Australian television’s Miss Fisher’s Murder Mysteries.

Of course, other names attract everyone’s attention. We probably all Googled Lilibet at some point in 2021.

And so these are the 80 top girl names 2021 here … interesting, unexpected, and sometimes incredibly rare.

A vintage and spirited nickname name.

A timeless choice for a daughter, rich with musical associations.

Elegant and vibrant, Iris is a flower name and a goddess name, too, rich with symbolism.

A surname name put on the girls’ list by actor Sutton Foster, of Broadway, Bunheads, and Younger fame.

A vintage elaborate of top names like Emma and Emily.

A surname name with deep 80s roots, thanks to Ferris Bueller’s Day Off and Princess Diana.

One of the rarer, but still lovely, Rose elaborations.

A Biblical garden, and a modern favorite for a daughter.

Tailored Maren might be a form of Margaret or Mary, one that fits right in with so many twenty-first century favorites.

Traditional Susannah – with or without the final H – fails to make the Top 1000, so it’s a thrill to see this name on the Appellation Mountain list.

The red bloom makes a bright name for a daughter.

This rare French and Dutch Anna nickname is nicely European and so very rare in the US.

Refined Frances is the name for parents frustrated that Charlotte and Eleanor are so popular. Bonus? It transforms thanks to nicknames galore.

Another Aztec name, the Nahuatl Xochitl means flower. It’s been imported to the US by way of Mexico.

A blue baby name, based on the color azure.

A playful Elizabeth nickname, made world famous by Meghan and Harry’s daughter.

A chart-topping favorite, proof that AM readers do love mainstream names, too.

An offbeat classic, vintage and strong.

A tree name, but also a Canadian heritage choice.

A slightly more phonetic Spanish spelling of Lady, this name is heard in Latin America and occasionally in the US.

Spirited and sophisticated Josephine appeals to parents who love all the nickname options, as well as parents who prefer it used in full.

Masculine in the Old Testament, Lael is more often feminine in the US. Credit the lilting double-L sound, like Lily and Lila.

A sometimes-heard nickname for Christina and Katherine, upbeat Cricket is also given independently.

A neglected Mary nickname that could substitute beautifully for Molly.

A rare elaboration of other names, Romelia brings to mind the capital of Italy, as well as many girl names ending with -lia.

Originally a Margaret nickname, vibrant Margot now stands on its own.

Alone spelled backwards, this is the name of Sherlock Holmes’ equally fictional little sister, who got her own Netflix movie in 2020.

Energetic Juniper feels like a twenty-first century answer to Jennifer.

Neil Gaiman reversed two letters, transforming his heroine from Caroline to Coraline, and putting a fresh option on parents’ lists.

A Nahuatl name meaning star, Citlali is familiar in Mexico, and heard in the US, too.

Possibly short for North, as in the Kardashian granddaughter, or maybe a Japanese name.

The Finnish word for snow.

A mini name sharing both Japanese and Arabic origins.

A Polish nickname for Sophia, pronounced to rhyme with Sasha in the US.

A saintly name borrowed from an ancient tribe.

The French word for hazelnut, or perhaps an Ava-Evelyn twist.

A glittering jewel box of a name.

A regal name borrowed from the night sky.

This Scandi classic is forever luminous thanks to Ingrid Bergman.

The evening star, and a tailored name less expected than Stella or Luna.

Vintage, Scottish Effie has been boosted by The Hunger Games and Skins.

A surname name once given to pilgrims, who held their palms together in prayer, Palmer follows Piper and Harper up the charts.

The flowing, Italian take on Alexandra.

A floral favorite with a slightly British accent, thanks to Downton Abbey.

With plenty of Southern charm, nickname-rich Magnolia is among the fastest-rising nature names for girls of our day.

Blake Lively named her youngest Betty. Hard to believe this Elizabeth nickname remains outside of the Top 1000.

Traditional, saintly Bernadette has been out of favor for so long that it feels revival-ready.

Recently big in the Netherlands, Senna might’ve been borrowed from the plant.

Brief and complete, enchanting Faye makes for a timeless choice.

Move over, Daisy and Sadie. Originally short for Margaret, sparky and vintage Maisie fits right in with names now.

A goddess name and logical successor to Top 100 Penelope.

A Hebrew name that looks quite a bit like masculine favorite, but has a different meaning: motion.

Originally short for Theresa, and now likely to be short for trending Tessa.

A vivacious classic boosted by Hamilton.

Sleek and French, Sylvie mixes the sounds of Sophie and Sylvia.

A unisex tree name in the key of Ashley.

Colorful Navy share sounds with favorites like Ava and Ivy. And – at least on this site – this blue-hued baby name is the reigning favorite among top girl names 2021!

Those are the Top Girl Names 2021 at Appellation Mountain. Any favorites? What surprised you the most?

Don’t forget that you’ll see these names again! The most-viewed posts at Appellation Mountain determine the contestants – and the seeding – for our annual March Madness Baby Names tournament!