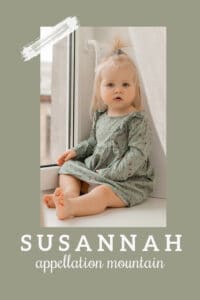 Thanks to Jules for suggesting our Baby Name of the Day.

The baby name Susannah goes all the way back to the Old Testament.

In Hebrew, shoshan is lily. In Persian, the flower was called sausan.

Both may relate to an Ancient Egyptian botanical name, but then again, maybe not.

The Hebrew original is closer to Shoshannah, while the Greek is more like Sousana. In English, it became Susanna, with or without the final H.

Back to the original Biblical bearer of the name.

A pair of Peeping Toms spied on her, and came demanding favors or else they’ll sully her good name.

She tells the Toms no dice, and is willing to face death – these were the days when a bad reputation was truly dangerous.

(It’s his book of the Bible in which the story appears.)

Daniel performs a cross examination worthy of a modern courtroom drama, and the Toms’ tale collapses. They’re put to death for lying, and Susannah – her virtue intact – goes free.

While some parts of Daniel were stricken during the Protestant Reformation, her story was well enough known to keep the name in occasional use through the Middle Ages.

There’s also Saint Susanna, said to be martyred during the third century Diocletian persecutions. Popular into the Middle Ages, her story is probably more legend than fact. The Church of Saint Susanna, a Baroque masterpiece, still stands in Rome.

William Shakespeare, that great namer, was the parent of a daughter called Susanna.

And during the Salem witch trials, Susannah was the name of both an accuser and one of the victims.

So the name has never really fallen out of use.

But say Susannah even today, and there’s a decent chance that someone will mumble something about banjos.

That’s because of Stephen Foster’s 1848 hit Oh! Susanna. The song is popularly associated with the California Gold Rush, which started right as the song took off.

In fact, the nineteenth century might’ve been the name’s heyday.

By 1880, the first year for which baby name popularity is available in the US, Susanna and Susannah both appear to be falling in usage.

Shirley Temple, the child star who made her own name so popular, starred in 1939’s Susannah of the Mounties.

Based on a 1936 novel by author Muriel Denison, it was the tale of a young girl spending a summer in Saskatchewan with her uncle, a member of the Royal Canadian Mounted Police. The movie version made Susannah an orphan, the sole survivor of an Indian attack, taken in by the Mountie who finds her.

In typical Shirley Temple fashion, she befriends the local tribal leader’s son, and eventually she saves the day.

The French Suzanne fared well in the 1940s, regularly appearing in the US Top 100.

Midcentury America also saw the popularity of nickname Suzy and Susie, as well variations like Susana, Suzanna, Suzette, and Susanne, and just plain Sue, too.

Susanna briefly gained in use during peak-Susan, too. Pop culture helped. The Gale Storm Show starred Gale Storm as Susanna Pomeroy, a cruise director on a ship sailing around the world. The series ran for four seasons. Earlier, a 1951 Western titled Oh! Susanna featured the song in the plot.

But as Susan’s long run as a favorite ended, it took all of the Su- names with it.

Susanna left the rankings entirely in 1997. Susannah has been gone since 1979.

In 2021, 60 girls were named Susannah, along with 147 Susannas. Combine the spellings, and the name is still outside of the current US Top 1000 rankings – but it comes closer.

For parents who love elaborate, traditional names like Isabella and Anastasia, but want something their daughter will never have to share, the baby name Susannah is an overlooked gem.

Not that Susannah requires a nickname. Like so many little girls who are Penelope, not Penny, there’s no need to shorten this name.

Familiar, with a great meaning, and centuries of use, it’s easy to imagine Susannah wearing well on a daughter born today.

As for the spelling?

What do you think of the baby name Susannah? 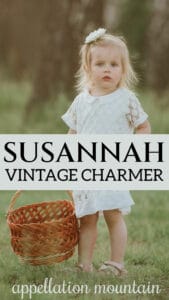 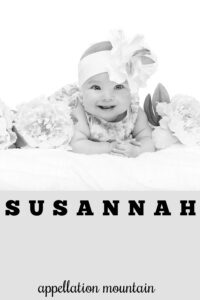