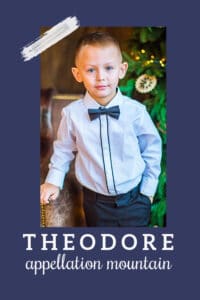 The baby name Theodore belongs to a US president, a singing chipmunk, and more and more baby boys with every passing year.

Long before a chipmunk ever sang on television, the baby name Theodore was well-established.

In fact, it stretches back to pre-Christian times, making the animated rodent more of a footnote than a defining figure.

In Greek, the name started out as Theodoros. Theo refers to god; doron means gift – God’s gift. It became Theodorus in Latin. Dorothea and Dorothy are cousins, with the same elements reversed.

The name was in heavy use in the ancient world, worn by a pioneering sixth century BC architect and a fourth century BC mathematician.

The first saint appears around the 400s AD. There’s a seventh century Byzantine military leader. Add in a pair of popes and the rulers of Naples, Russia, Corsica, Ethiopia, Antioch, and Montferrat and this was a widely known name well before the nineteenth century.

No surprise that it appears in nearly every European language, with variations from the Italian Teodoro to the Russian Fyodor and beyond.

But in English, the baby name Theodore failed to catch on. It wasn’t popular until the 1800s, when those creative Victorians finally discovered Theodore.

Nineteenth and early twentieth century notables by the name include:

US popularity data begins in 1880. The baby name Theodore sits solidly in the Top 100 – and rising – in those early years. In fact, it was President Roosevelt’s 1901 swearing in that catapulted the name into the Top 50 during his tenure in office.

Born in 1904, Theodor Seuss Geisel was one of those peak-Theodore babies.

But the children’s author is best known by his pen name, Dr. Seuss.

While his work also included political cartoons and animation work for for the United States Army during World War II, Seuss devoted the bulk of his career to playful, thoughtful children’s books, writing and illustrating enduring favorites. Titles include 1957’s The Cat in the Hat, 1957’s How the Grinch Stole Christmas, and 1971’s The Lorax.

By the time Ross Bagdasarian recorded his novelty Christmas song in 1958, creating the trio of singing chipmunks, Theodore was on its way out.

All three chipmunks were named for executives at Bagdasarian’s record label – which tracks, because those executives were probably born during the name’s earlier run of popularity.

By 1959, the sweater-wearing trio were appearing in a comic strip. And by 1961, they had their first television show.

They’ve been updated and revised over the years, changing and adapting to try new musical styles and cinematic adventures.

As the adopted sons of their father/manager Dave, Alvin, Simon, and yes, Theodore Seville, all came with names that were firmly out of favor in the late 1950s and early 60s.

So they were quirky choices, a little offbeat. The names were every bit as surprising as singing rodents.

As the baby name Theodore fell in the rankings, many Theodores answered to the nickname Ted.

Teddy feels both older and fresher. The former president is often called Teddy Roosevelt by the public, though he personally disliked the nickname, preferring to be called Colonel or T.R.

He wasn’t the only one. Television actor Teddy Wilson appeared on 1970s staples like Good Times.

But Teddy isn’t necessarily the go-to nickname today. That distinction belongs to Theo.

It fits with trends today. We love names ending with O, and it’s easy to understand Theo catching on with Leo so in favor.

The numbers back this up, too. As of 2021, Theo ranked #142 as an independent name – the highest chart position by far.

Bill Cosby was a well-established comedian and television actor, beginning in the 1960s.

But he became a household institution after creating The Cosby Show, earning the title “America’s Dad.” The series, which rank from 1984 until 1992, focused on the Huxtable family. Dad Cliff – played by Bill – was obstetrician married to successful attorney Clair. The pair raised their five children in a picture-perfect Brooklyn brownstone.

Today it’s hard to think about the show without considering the later revelations about Cosby. But back in the 1980s, The Cosby Show was the dominant television sitcom, an inescapable part of American culture. It was wholesome, serious, funny, fashionable, and focused on an upper-middle class African-American family, something that hadn’t really been part of television before.

Sharp-eyed television fans might know that Theodore belonged to another famous sitcom character – 1950s Theodore “Beaver” Cleaver, the young star of Leave It To Beaver. While the show ran from 1957 through 1963, it reached a new generation on re-runs in the 1980s.

Which brings us right back to the middle Cosby son.

Theodore Aloysius Huxtable was played by Malcolm-Jamal Warmer. When the character debuted in 1984, the baby name Theodore ranked #213.

Despite the show’s runaway success, the name – and nickname Theo – continued to fall out of favor.

Theodore stood at a respectable, but frosty, #313 in 2004. It marked the name’s least popular moment.

It wasn’t that the name was unknown. Not at all!

In 2006, blockbuster family comedy Night at the Museum would feature Robin Williams as a wax statue of President Theodore Roosevelt himself, come to life, in Night at the Museum. And the generation naming children had grown up with Theo Huxtable.

The baby name Theodore rose in use for other reasons. Part of it was the appeal of o-ending nickname Theo. Some is attributable to our love for longer, popular boy names. Oliver and Sebastian, Alexander and Benjamin all succeeded in the early 2000s.

In the following two decades, characters named Theodore would appear in popular culture. Fiction gave us John Grisham’s adolescent aspiring lawyer, Theodore Boone. Television introduced figures like The Walking Dead’s T-Dog. One of the more influential figures might have been Prison Break’s Theodore Bagwell, played by Robert Knepper. While he was a villain, he quickly became a major part of the successful series, following its 2005 debut.

By 2021, the baby name Theodore soared into the US Top Ten for the first time ever, ranking #10.

All of this makes the baby name Theodore the ultimate comeback classic.

From ancient days to more recent American history, notable Theodores are plentiful. And yet, today it feels just a little different from an earlier generation’s Davids and Daniels, an old school choice. Factor in the oh-so-current nicknames Theo and Teddy, and it’s easy to see why parents are wild about this traditional, on-trend name.

What do you think of the baby name Theodore? 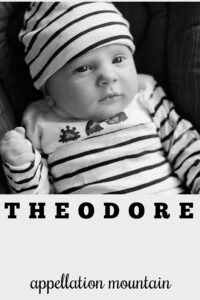 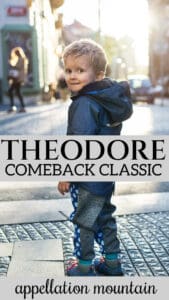