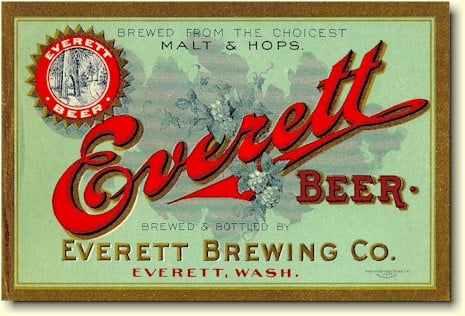 Thanks to Nicole for suggesting her son’s name as our Baby Name of the Day: Everett.

Some might dismiss Everett as a surname, yet another last name promoted to the first spot as the trend that launched Tyler and Mason continues.

But the line between surnames and given names isn’t always so clear.

Once upon a time, Everett was a variant of Everard, an English given name with Germanic roots. It appears that Everett and Everitt developed as surnames for those descended from men called Everard, much as Jameson and Johnson refer to patriarchs James and John.  Surnames like Eberhardt and Everhart come from the same elements.

Everett has been a surname and a given name for generations.  From the 1880s through the 1920s, Everett often appeared in the US Top 100 for boys, making him more of a revival choice than a new discovery.  You might think of John Everett Millais, the nineteenth century painter with the complicated personal life.  (He married Effie Ruskin, despite her marriage to his good friend.)  Or maybe former surgeon general Charles Everett Koop, better known as C. Everett.

While Everard might sound over the top unless you’re playing a medieval knight, Everett manages to sound both noble and comfortable at once. This isn’t about the name’s etymological derivation – it means roughly “strong as the wild boar” – but about what we hear in the name. Ever connotes faithfulness and loyalty.  Something about the name conjures up forests of evergreen trees, too, an undeniably attractive image.  And there’s a nod towards Everest as well, which makes us think of majestic mountains.

Speaking of mountains, Everett is a place name, worn by at least a dozen sites on the map, including a mountain range in remote Antarctica and more familiar suburbs of both Boston and Seattle.

As a surname, there are plenty of notables:

Toss in a few politicians and the handsome English actor Rupert Everett, and it’s a name that defies easy categorization.

Musician Isaac Hanson has a son called Clarke Everett, and author John Irving gave the name to his youngest son.

In the US, it has never been out of the Top 1000.  If you’ve never met an Everett – or if you’re lucky enough to discover the name on your family tree – that could make this the perfect choice for parents seeking an on-trend, but slightly different name.

Except for one tiny thing: Everett is on an definite upswing.  In 2001, he ranked a chilly #599 – perfect for lovers of obscure gems.

All of this makes Everett a stylish appellation that would wear well on a boy born in 2013 – but he isn’t necessarily the rarest of the rare anymore.