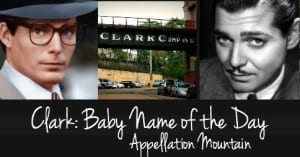 It’s the name of a trailblazing explorer, a Hollywood leading man and Superman’s alter ego. And, of course there’s the candy bar and the Griswolds …

In honor of my dear dad, our Baby Name of the Day is Clark.

Clark is an occupational surname, given to someone who had recording or secretarial duties. Think of our word cleric, from the Late Latin clericus. It became clerc in Old French and eventually clerk or clark in English.

Back in 1804, Meriwether Lewis and William Clark set off to explore the territory acquired by the US in the Louisiana Purchase. The Corps of Discovery Expedition left St. Louis in May, and reached the Pacific Ocean in November 1805.

This takes the name away from the ledger books, and into the great outdoors. Then there’s William Clark Gable. Some claim the actor was named after the explorer, but Clark appears elsewhere on his family tree.

He started acting in the 1920s, scored an Academy Award for It Happened One Night in the 1930s, and filmed The Misfits in 1961. It would be his last movie – he died two weeks after production ended. He’s probably best known as Rhett Butler in Gone With the Wind.

The Man of Steel was born on the distant, doomed planet of Krypton, and sent to Earth as a baby, where be became a Kansas farm boy called Clark Kent. He’s a major superhero, reinvented for comics and movies and television. Long-running prequel series Smallville gave us a peek at his early years in Kansas from 2001 through 2011. Now we’re waiting for 2016’s Batman v. Superman: Dawn of Justice to put a new spin on the story.

It’s worth noting that while Superman is the superhero, Kent is likable, too. Maybe that’s because of Christopher Reeve in those glasses, as a Daily Planet journalist. Or maybe it’s thanks to Tom Welling’s portrayal of the young Kent in Smallville. 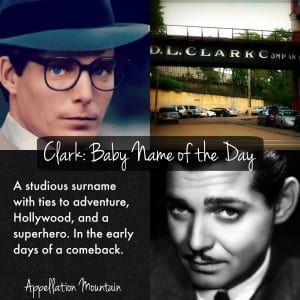 In the 1980s and 90s, Chevy Chase played Clark W. Griswold. He took his family on a series of disastrous vacations. As we loved the Griswolds, a station wagon-driving dad isn’t much inspiration for a baby name. But now the movie is being rebooted. Ed Helms plays a grown-up Rusty Griswold, and Clark is the grandpa.

Clark: By the Numbers

But in recent years, Clark has made a comeback. And why not? It fits with our affection for occupational surnames, as well as short names like Cade, Cole, Gage, and Finn.

With ties to a Hollywood legend, a superhero, and the American West, it’s easy to imagine this name appealing to many parents today. The numbers bear this out. Clark reached #382 in 2014, and seems to be attracting more positive attention.

If you’re after something traditional, but not quite mainstream, Clark is one to consider.

What do you think of Clark? Is this name ready for revival?