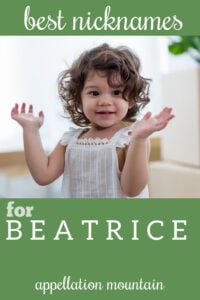 Beatrice nicknames range from the sci fi Tris to the well-why-not Birdie?

A Top 100 choice into the 1930s, count Beatrice among the classic girl names right at home in the twenty-first century. It requires no nickname, but if you’re the type to shorten everything? Luckily, options abound!

Certain accents make the first syllable more of a Bay and less of a Bee. Maybe. But even if you’re not hearing it, almost any B name could easily shorten to Bay. Short names feel quite stylish today. We love choices from the natural world, like River and Skye. Plus, a fictional character answered to the name on ABC Family’s Switched at Birth, too, making it feel slightly more familiar for a daughter.

Some pronounce Bea nickname Baya. Or Bee-ah. Or just plain Bee, as in Bea Arthur. Bea hardly counts as unexpected – it’s probably the default nickname. And yet, with all of those possible pronunciations to ponder, there’s room to make Bea feel distinctive.

Spell it Bebe or Bibi. Either way, it  makes a great nickname for Beatrice. Beatrice feels buttoned-down; a good girl name. Bebe takes the name to the wild side, an edgy, sophisticated, even eccentric, nickname name in the key of Gigi or Lulu. Beatrice becomes a Rhodes scholar, while Bebe is her supermodel alter ego.

As Beatrice nicknames go, it’s the ultimate in simplicity. Other Bee-Beatrice names include Jay for James, Kay for Katherine, and Elle for Elizabeth or Eleanor. Some parents appreciate the honeybee imagery, too.

Traditionally a nickname for Elizabeth, Bess could work beautifully for Beatrice, too. The ‘s’ sound in -trice lends itself to Bess – even if it doesn’t look obvious at first.

Another Elizabeth nickname, Betty might also work nicely with Beatrice. Between the ‘B’ and the ‘t’ sounds, Betty follows naturally.

Birdie is the kind of nickname that could attach to nearly any girl’s name, whether the sounds are there or not. It works with Elizabeth and Bernadette, so why not Beatrice?

If Rebecca can become Bex, maybe Beatrice shortens to Bix? Wait, make that Beatrix. Both the -trice and -trix spellings are used in English, though Beatrice remains more popular. Still, Beatrix works, too – and Bix is a definite bonus.

Veronica Roth put Tris on our radar with her 2011 novel Divergent. It’s since become a book series, as well as a movie adaptation. Shailene Woodley played Beatrice “Tris” Prior in the movie.

Strictly speaking, Trixie comes from Beatrix. Except there’s no reason Trixie couldn’t be a nickname for Beatrice. Trixie feels sparky and retro, and maybe a little bit hipster, too, especially since Mo Willems gave the name to the pint-sized heroine of his Park Slope adventures, Knuffle Bunny and sequels.

What are your favorite Beatrice nicknames? 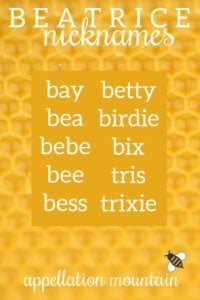