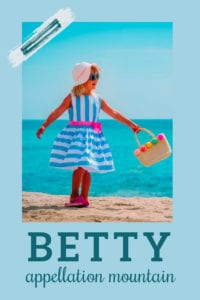 The baby name Betty has gone full circle, from girl next door to grandma. It might soon be time to revive this sweetly vintage choice.

Thanks to Claire for suggesting our Baby Name of the Day.

In the Old Testament, the name is Elisheva – my God is an oath. By the time we reach the New Testament, it’s closer to Elizabeth. She’s the mother of John the Baptist, sister to Mary, and a saint in her own right, too.

No surprise, then, that the name is among the most evergreen of choices for girls, across time and language.

The spelling Elizabeth first surfaces in England in the 1200s, and really picked up steam when Queen Elizabeth I took the throne in 1558. The name has rarely been out of favor since.

All of those Elizabeths necessitated a long list of short forms: Tibby, Bess, Elsie, Eliza, Liza, Lizzie, Libby, Betsy, Beth, and, of course, Betty, are just a few.

It’s also worth noting that Betty may have been used as a nickname for Beatrice, Bertha, and Bethia over the years.

Plenty of these nicknames eventually felt more like independent choices, including the baby name Betty.

From 1928 through 1934, it ranked #2 in the US, right behind Mary. According to the US Social Security Administration, it’s #14 over the last one hundred years.

And that’s not counting a generation of women named Elizabeth who answered to the nickname, too.

Indeed, Elizabeth “Betty” Zane was a hero of the American Revolution.

They lived in Wheeling, West Virginia during the war. A group of Native Americans allied with the British attacked Fort Henry, where Betty and her parents were sheltering. As they ran low on gunpowder in the fort, she offered to run back into town for more. She made the mad dash. Accounts tell us that she was shot at, but not hit. Fort Henry managed to fend off attack until reinforcements arrived.

But this story from the late 1700s might have something to do with the name’s rise in the early twentieth century.

That’s because her great-grandnephew, the bestselling author Zane Grey, wrote a historical novel about his aunt, titled Betty Zane. He published it in 1903, his very first book.

1903 also marks the year that the baby name Betty entered the US Top 1000 and began a steady march to the top.

The name continued to surface in pop culture. The American-English husband-and-wife authors CN and Am Williamson penned a series of stories featuring Lady Betty in 1906.

But it appears that the name peaked well before the most famous characters wore it.

Animated pin-up girl Betty Boop debuted in 1930. She was modeled after Clara Bow.

In 1936, Betty Haig won an Olympic gold medal in the Olympic Rally – the first and only time auto racing was part of the games.

World War II pin-up girl Betty Grable became so famous that her most famous photo is considered among the most influential of all time. She enjoyed a successful acting career in the 1940s and early 50s, before retiring from Hollywood in 1955, though she would appear on Broadway into the 1970s.

And, of course, there’s Oscar-winning Bette Davis – born Ruth Elizabeth. From Broadway to Hollywood, her career spanned six decades. She changed the spelling of her name from Betty to Bette after a character in a Balzac play. During World War II, at the height of her success, she sold war bonds and worked tirelessly to entertain soldiers, ensuring that her fellow entertainers did the same. Davis earned the US Department of Defense’s highest civilian honor for efforts.

In some ways, Davis marks a shift for the name’s image from girl to woman.

It wasn’t just Bette Davis, though. The name was growing up.

In 1974, Gerald Ford took office as the 38th President of the United States. His wife, Elizabeth “Betty” Ann Ford became First Lady. Unlike some of her predecessors, she became active in social policy. The Betty Ford Center for substance dependence bears her name.

But the most famous Betty of the moment might be Betty White. She earned her first Emmy nomination way back in 1951, and her most recent in 2014.

Born in 1922, the Golden Girls alum links the name to a certain generation. And yet, the names of her co-stars and their characters in that unforgettable show have fared well: Sophia and Beatrice and Rose. She passed away late in 2021, at the age of 99 – a legend for our times.

Not so long ago, Mad Men gave us Betty Draper, a suburban housewife more Davis than Crocker.

Then came Ugly Betty’s Betty Suarez, played by America Ferrera. The fashion world comedy was based on a telenovela called Yo soy Betty, la fea.

Neither show budged the name. It left the US popularity charts in 1996, and remained unranked, even as those series found early twenty-first century success.

Just 160 girls were named Betty in 2019. That’s not a new low, but it’s definitely not a pattern that suggest the name is ready for revival.

And yet, rumor has it that Blake Lively and Ryan Reynolds’ youngest daughter is named Betty, a sister for James and Ines. Blake’s friend Taylor Swift included a song titled “Betty” on her new album. The lyrics also mention Ines and James, which sparked speculation that it was a name reveal. Swift later confirmed that the names were inspired by her “friend’s kids.”

For parents today, Betty feels vintage and gently old-fashioned. But there’s an edge, too.

Betty has long referred to either a female skateboarder – or maybe a hanger-on. But the 2020 HBO series Betty claims it as the former. (Though the characters are named far more contemporary things, like Indigo and Janay and Camille.)

It’s a long and winding story. But there’s no question that the baby name Betty is overdue for a comeback. It feels fresher than Molly, every bit as sparky as Sadie.

Would you consider the baby name Betty for a daughter?