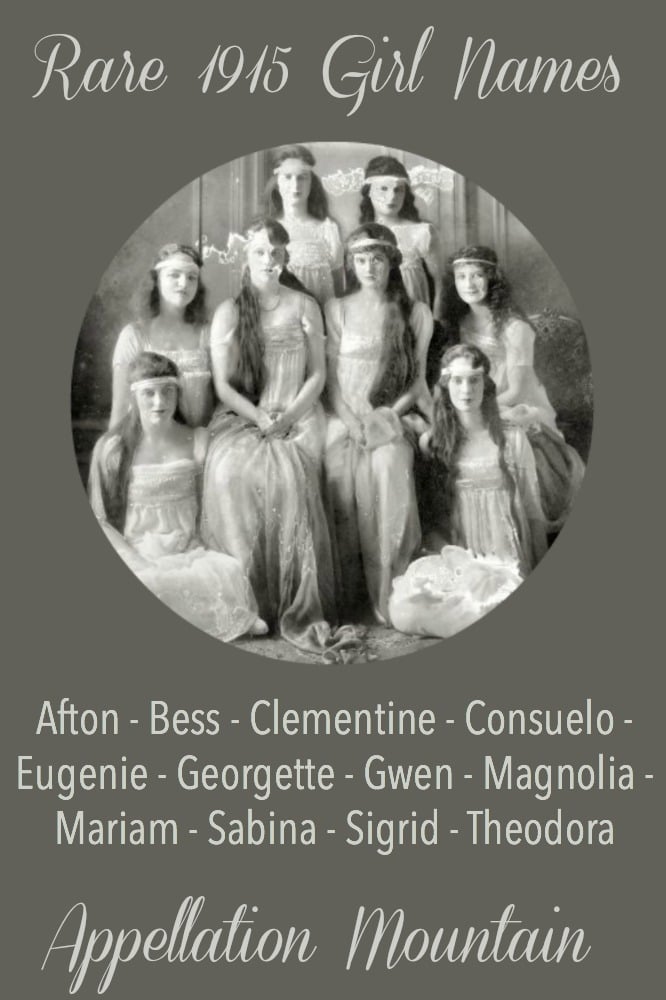 Rare 1915 girl names range from oddities – what inspired the 46 girls named Dimple? – to names that sound completely at home today.

Why look to the past for baby naming inspiration? If you love Evelyn and Amelia, but feel they’re too common, the past is rich with fresh vintage choices. Or if you’re simply looking for something different, there’s no harm in seeing what working for our grandparents – or great-great-grandparents – generation!

In fact, this marks the fourth post in the series:

All of the lists share a few things in common. First, these names were all above the 500 mark on the US popularity list for the given year. As of today, they have never cracked the US Top 100, even if some of them eventually did become slightly more common. They’re not very popular by today’s standards, but they feel on-trend and could catch on – if only parents were aware of them!

So if you’re looking for a name with history, but still nicely underused, check out these great 1915 girl names.

A Robert Burns poem transformed Afton from mere river name to occasional given name. (Though in the 1791 poem Sweet Afton, the sweetheart answered to Mary.) It was set to music many times, and it looks like a new version may have been released around 1905 or 1907. That explains the name’s use in the early twentieth century.

Evergreen Elizabeth never falls out of style. The name’s many short forms, on the other hand, come and go. Once quite common, Bess has retreated into the shadows. And yet, Tessa and Tess feel very much in favor today. If you love slim, trim names for girls, but want something less common, Bess deserves a look. Bessie charted in the Top 100 in 1915, while the sparer Bess followed farther up the charts. While Bess hasn’t ranked as an independent name since 1927, it’s always possible that some Elizabeths (or Bernadettes or Barbaras) answered to Bess, too.

Darling Clementine boasts plenty of history, from the folksy ballad to Mrs. Winston Churchill. Back in 1915, it ranked #560 – far from the top spot, but not unknown. After more than half a century of obscurity, Clementine has returned to the US Top 1000, and remains relatively underused – at least for now.

Love virtue names? Looking for an English-Spanish crossover less common than Isabella or Sophia/Sofia? Consider Consuelo. The name means consolation, and comes from a title for the Virgin Mary. But in 1915, it brought to mind American socialite Consuelo Vanderbilt.

Eugene seems stuck in style limbo, but Eugenie might show promise. Pronounced differently in French, as well as British and American English, the name can take a long EE or AY sound. Back in 1915, Eugenie sat just inside the US Top 1000. Today the name feels much rarer. Of course, the British princess keeps the name in the spotlight.

Everybody loves Georgia. A traditional, feminine choice that feels like a modern place name, Georgia reached the Top 100 in the late nineteenth and early twentieth centuries. Today Georgia is climbing again. Meanwhile, Georgette remains neglected. One notable use? Melissa McCarthy named her younger daughter Georgette in 2010. If Juliet can climb high, why not Georgette?

Gwen shortens long and lovely names, like the medieval Guinevere and Gwendolen. It also feels minimalist, just like Bess, but maybe even more modern. Back in 1915, Gwen ranked #686. Gwendolyn – with the y spelling – came in twice as high. Despite the popularity of Spiderman and Gwen Stacy, this name seems to be slipping, at least for now.

The musical Show Boat includes a character called Magnolia, but it debuted in 1927 – too late to explain the name’s burst of popularity in 1915. In fact, that’s around the peak year for the name’s use. Nature names like Hazel, Violet, Opal, Ruby, and June ranked in the Top 100 back then, so maybe it’s no surprise that other nature names found favor, too. Today, Magnolia is rising fast, buoyed by our love of ecovintage girl names, and the long, elaborate sound, especially that -lia ending.

Don’t mistake Mariam for sunny Mary Anne. While they’re both forms of the enduring Mary-Maria family, this spelling is familiar in Arabic, as well as the Greek version of the Old Testament. It’s just the tiniest bit dramatic, a twist on the traditional. Today, it’s actually more popular – but still relatively rare.

Ancient and international, Sabina fits right in with plenty of favorites for girls. Think of Sophia and Savannah. The unrelated Sabrina has fared reasonably well, but Sabine and Sabina remain overlooked. Back in 1915, Sabina ranked a respectable – but rare – #751. Today it fails to chart at all. One recent use: Kristen Stewart played Sabina in the 2019 Charlie’s Angels reboot.

Quick – think of a Scandinavian heritage name! There’s Ingrid and Astrid, of course, but how about Sigrid? The formal version of Siri, Sigrid is seldom heard in the US today. Back in 1915, though, Sigrid came in at #967 – the very last year it would appear in the US Top 1000.

Theodore is trending for boys, and Thea feels quite stylish for girls. So why not Theodora? This feminine form of the name ranked #568 back in 1915. This lovely antique is attracting more attention today, but remains uncommon enough to surprise and delight. And oh, the nickname possibilities are grand!

Do you have any of these rare 1915 girl names on your shortlist? 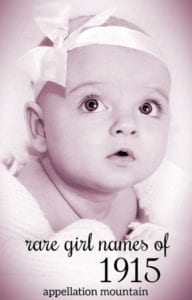 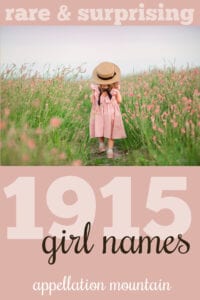