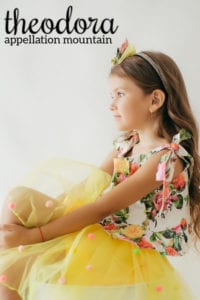 Theodora combines a long list of great nicknames with a storied elegance.

The Greek Theodoros means gift of god. Change the ending sound to an ‘a’ and Theodora makes the obvious feminine form.

Dorothea and Dorothy both come from Theodore, too. Dorothy has ranked as high as the US Top Ten for nearly four decades in the early twentieth century.

And Theodore long ranked in the US Top 100. It returned to the top of the charts in recent years, too.

In the sixth century, Theodora married future Byzantine emperor Justinian I. She wasn’t your typical imperial bride; her father trained bears at the hippodrome and her mother was an actress. That alone made her status far too low for such a lofty marriage. Factor in that she also worked on the stage, and it took the change of laws to permit their marriage.

But laws were changed, and in 527, he ascended to the throne, with her as his consort. She ruled alongside her husband, enforcing strict rules at the imperial court, supporting her husband’s reforms, and convinced her husband to crush a rebellion. She’s considered a saint in the Eastern Orthodox church.

Others followed, royal women of the eastern empire, well into the Middle Ages.

The ancient world is packed with fascinating women by the name, like Theodora of Emesa. She studied philosophy, and became an active member of the Neoplatonist community in early sixth century Alexandria.

In the tenth century, a female senator by the name exercised power in Rome. The period is often noted for political corruption, with the counts of Tusculum and their family controlling the selection of future popes. And yet, whether the powerful used their influence for good or for personal gain, it’s clear that everywhere there’s a woman of influence, there’s a Theodora.

Handel’s masterpiece Theodora is based on yet another figure: a young noblewoman martyred for her faith during the Diocletian persecutions in the year 304.

It’s said she refused to sacrifice to pagan gods. When arrested, she declared her Christianity and refused to marry. As punishment, Theodora was sentenced to a brothel. But once there, a fellow Christian, Didymus, switched places with her. She escaped; he revealed their deception. Both were caught and sentenced to death.

While they may have been legendary – in fact, the story of Antonina and Alexander is nearly identical – it’s another story of bravery and conviction.

Names like Thelma and Doris were popular a century ago, so it’s not clear what held this name back.

A handful of famous figures and fictional characters have answered to the name over the years. Fans of Grey’s Anatomy probably think of Teddy Altman, a surgeon on the long-running series. Fans of LM Montgomery might think of Theodora Dix, a minor character in some of the Avonlea stories.

If you love the flexibility of nickname-rich names, Theodora belongs on your list. Just like Elizabeth or Margaret, it’s easy to come up with a nickname for every personality, from glam Thora to cuddly Teddy.

If you love the sound of Alexandra or Margaret, but want something a little on the rare side, this might be the name for you.

What do you think of Theodora? Have you met any in real life? What nicknames do you prefer? 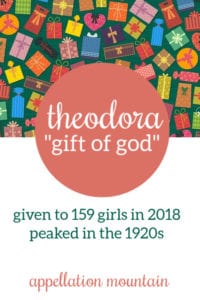