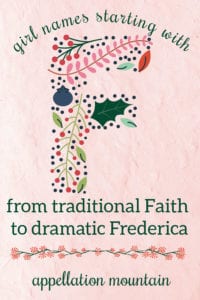 You can, of course. There’s classic Frances and daring Fable. We might think of Faith and maybe Fern and Fiona, too. Some PH names can also be F names, but some work better than others – for every Filomena, there’s a Fenix. And surnames, like Flynn and Foster, might work for our daughters, though they’re more typical for our sons.

The name of the Norse goddess of love and beauty, Freya caught on elsewhere in the English-speaking world first, but lately it’s climbing in the US, too.

A virtue name with a decidedly spiritual vibe, though Faith feels bigger than any single religion. No list of baby girl names starting with F is complete without this traditional word choice.

An Irish surname, and the only one of the Finn names used in big numbers for girls, making it a gender-neutral name.

The name of the prophet Muhammed’s daughter in Islam, she lent her name to the “Hand of Fatima,” or hamsa. It’s an amulet picturing an eye inside of a hand, thought to ward off evil. Fatima, Portugal is also the site of a Marian apparition. Other spellings, like Fatema, Fatimah, and Fatma are used, too.

A lacy, delicate name with a great meaning: happiness or good fortune.

A sweet mini name, Faye might bring to mind fairies, Arthurian legend, or the Fates of Greek mythology. Spellings Fay and Fae are seen, too.

A classic Arabic name, Farrah Fawcett made it familiar in the US in the 1970s. It carries a great meaning; joy.

The Roman Faustus means lucky, as does this elaborate feminine form. Faustine is another possibility.

We love baby names borrowed from animals, like Wren and Bear. So why not this name for a young deer? It did see some use when nature name Dawn reached peak popularity in the middle of the twentieth century.

A name with Scottish roots and a romantic meaning: white shoulder.

From the Italian word for flame, Fiammetta is rare – and fiery.

Another Irish option, Fianna marries a pretty sound to a fierce meaning: band of warriors.

Piper was among the hottest baby girl names in the early 2000s. Fifer is a close cousin, but far less common.

A cousin to Finella.

A romance language spelling for Philomena, a name with a powerful meaning: to be loved.

An Arabic name with multiple potential meanings, and a surprising, but accessbile, sound.

The French word for flower, and a heroic Harry Potter name, too. Flor is the Spanish equivalent.

A word name that seems calculated to bring good luck.

The feminine form of Frederick, Frederica feels like a substitute for Alexandra, Isabella, or Victoria. Like Frederick, it shares the powerful meaning “peaceful ruler.” Nickname Freddie ought to wear every bit as well as rising favorite Frankie. 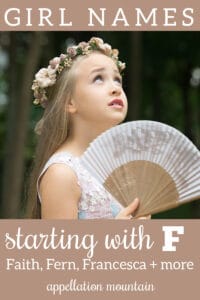 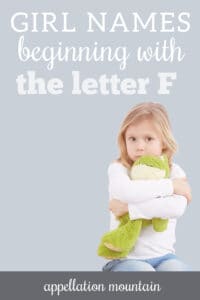