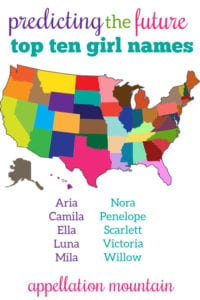 Back in 2016, it seemed like the current Top Ten was ripe for change. Too many of our favorites had topped the charts for ages. So I started imagining which names might someday replace the list. Not in the next year, exactly – but soon-ish.

My guesses were based on US popularity data from the fifty states. I figured smaller data sets might mean I could spot trends earlier. Or, at the very least, it was a fresh lens on names that enjoyed lots of use in certain parts of the country – whether or not that (eventually) translated to wider use nationwide.

While we tend to think of new popular names as coming out nowhere, it really isn’t so. Pop culture might catapult a name – like Logan – into the Top Ten. But even so, Logan ranked #18 the year before. Names don’t go from, say #200 to #3. Not in a year – maybe over a dozen.

So if this list feels predictable? Maybe it is – at least a little. But let’s look back at my 2016 guesses first. While I had a few hits, this is harder than it looks!

Sure enough, Amelia tipped into the Top Ten shortly after I guessed it might. The vintage favorite climbed steadily since the beginning of the twenty-first century. The image of pioneering aviator Amelia Earhart tempered the name’s demure image. A 2009 movie starring Hilary Swank as the celebrated pilot came at just the right moment to give this high-flying name some extra lift.

Musical Aria has rocketed up the US Top 1000. It entered the charts in the year 2000, cracked the Top 100 in 2012, and hasn’t slowed down since. Television characters on Pretty Little Liars and Game of Thrones boosted the name, too. It’s yet to crack the Top Ten, but I’m not ready to rule it out.

Camila seemed like a long-shot for the future Top Ten when it picked it. After all, it ranked #43 – quite a ways from the top of the charts. But Camila was the Spanish form of an ancient Roman name, one that belonged to a legendary warrior, her story told in the Aeneid. That sets it up to succeed the equally regal, Latina Isabella. And in late 2015, Fifth Harmony member singer Camila Cabello launched a wildly successful solo career.

Claire has bounced around Top 100 since 1998, mostly trending up. Except the name has hit a plateau. I liked it for the future Top Ten because it’s gently French, a quality American parents seem to like, and it has the same brief, but complete, vibe as names like Grace. Then again, Grace has yet to appear in the US Top Ten, too. Maybe single-syllable names just have a tougher time of it? Looking back, only Ruth and Joan have ever made the US Top Five. Another factor: the slightly sparer Clare – hold the i – has gained in use dramatically from 2017 to 2018.

Evelyn is the second name on this list that did, indeed, make the Top Ten. It has a tailored style, vintage status, and that stylish middle V we all love. And, of course, going from #15 to #10 isn’t much of a rise. Then again, plenty of names hover just outside the rankings for years and never quite make it into the elite Ten.

A few years ago, Hazel felt unstoppable. Adorable power couple Jon Krasinski and Emily Blunt named their daughter Hazel. The Fault in Our Stars was the young adult novel that had everyone talking, featuring a modern medical take on Romeo and Juliet. Only this time they were named Gus and Hazel … sometimes Hazelgrace. But this name has slowed quite a bit in recent years. I wouldn’t rule it out completely, but perhaps Hazel appeals to a smaller section of the parenting public … and not quite enough to take it to the tippy-top.

Nora straddles an interesting divide. It can feel serious. There’s something about Nora that sounds right for an accomplished attorney. You’d want your heart surgeon or accountant to be named Nora. But it’s also a bouncing, light name. It works for a girl. And it works for a woman, too – an artist, a musician, a poet. It’s that dual nature that makes me think Nora might have more to offer. At the moment, I think it has slowed thanks to the rise of the similar Cora. But between the two names? I’d place my bets on Nora going forward.

Paisley is a high energy surname name, a vibrant pattern and a last name in the first spot. We’ve traded Taylor for Madison for Harper. Why not Paisley? Perhaps it’s the appeal of other P names, like Parker and Palmer. Maybe alternative spelling Paisleigh stole some of the name’s numbers. But I think this may be one that comes just short of broad appeal. That means it may spend years in the Top 100, but won’t ever be too wildly common.

Another surname name I thought might make the Top Ten, Riley hasn’t quite gotten there. It has plenty of likeable Irish appeal. And the young girl at the center of Disney-Pixar movie Inside Out helped boost this name from 2015 to 2016. But it looks like even a healthy dose of pixie dust couldn’t take Riley to the top.

Colorful Scarlett started out as the immortal heroine of Gone With the Wind. And then came Scarlett Johansson, who graduated from ingenue in 2003’s Lost in Translation to serious Hollywood A-lister as a mainstay of the Avengers and a serious actor, earning not one – but two – Academy Award nominations in 2020. Along the way, this name has changed, too. It’s become a mainstream staple, exuberant and a little bit edgy. But it feels like a rock solid, strong choice for a daughter, too.

So that’s the past. What do I imagine for the future Top Ten girl names? Evelyn and Amelia left two spaces empty. Other names, I think, have missed their moment.

A mix of old and new girl names makes up my picks for future Top Ten choices:

Musical Aria has so many things going for it: an appealing sound, lots of pop culture tie-ins, and a minimal look that still carries lots of sound. I think it’s still one to watch.

We’re forever on the lookout for English-Spanish crossovers, and Camila Cabello’s career hasn’t slowed down. So I’m bullish on the continued rise of Camila, too.

As for Nora? I think it has surprisingly broad appeal, the kind of name that appears on lots of parents lists. To some, it’s a serious, honor roll kind of names, while others hear an upbeat, Irish import.

I think Scarlett Johansson deserves a lot of credit, not just for this name’s success over the last two decades, but for an image shift. Scarlett still feels sparky and fun for a child, but the twice-nominated actor who plays the world-saving Black Widow? It adds a lot of character, courage, and strength to this pop culture staple.

Could there be a formula for a new Top Ten girl name? If so, it’s a two-syllable choice with a strong L sound and an -a ending: Ella, Luna, Mila.

I’ve long thought that Ella would run out of steam. It’s the sound in so many a chart-topping girls’ name, some of which have fallen in recent years. But Ella just won’t quit. Maybe we love the name’s simplicity – a brief, but complete name. Or maybe we’re drawn to the sound. Either way, I think Ella could be the next Emma. That makes it a promising possibility for future Top Ten girl names.

Like Camila, Luna benefits from Spanish-English crossover appeal. It’s got the Harry Potter heroine advantage. And we love a good nature name, so why not Luna in the US Top Ten? It’s also worth noting that while some might dismiss it was a modern innovation, Luna qualifies as vintage. It ranked in the Top 1000 most years from the 1880s into the 1910s.

As for Mila, it’s Mia with the added appeal of an L sound. More than any other name on this list, it’s a recent arrival to popular girl names. But nothing about Mila feels like a trendy, fleeting choice for a daughter. Instead, it’s the kind of choice that sounds so right in 2020 that we’re wondering why we didn’t think of it sooner?

I’d long dismissed Penelope as a little too quirky to get really popular. Except Chloe made the US Top Ten not too long ago. And Penelope isn’t so different from past favorites like Kimberly and Dorothy.

Victoria has two advantages: first, it sounds great in Spanish. But secondly, we’re all watching the luminous Jenna Coleman as a young Queen Victoria on the British import series. It’s run for three seasons, and it’s possible we’ll see another season or two – though much later in the long-reigning royal’s life. A strong traditional choice, with nickname options galore, boosted by an appealing mini series sounds like a recipe for a Top Ten name.

And now for something completely different: Willow. It’s my dark-horse choice, a name I really don’t think can make the Top Ten. Except that maybe it can. A nature name we fell for back in the 1990s thanks to Joss Whedon, Willow has gone far beyond its initial appeal. It’s the choice miles to go. But I don’t think it’s out of the question, either.

Those are my picks for future Top Ten girl names. Can you see any of these rising that high? What would you add to the list? 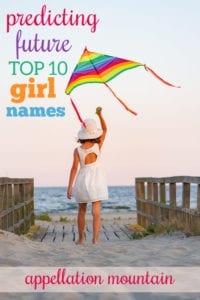 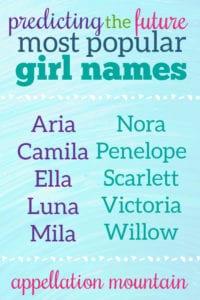