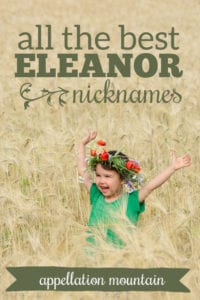 Let’s look at Eleanor nicknames. Not just any nicknames, either – unexpected choices, the kind that might surprise.

Eleanor needs no shortening, of course. It’s three syllables, and rolls off the tongue. It makes for a smart name, one rich with history and style.

But after ranking in the US Top 50 since 2016, the name is no longer rare. Traditional names trend, and Eleanor is among the most stylish.

Maybe you’re considering Eleanor nicknames to stand out from the crowd. Or maybe you like the idea of shortening your child’s name, but aren’t sure where to start.

Maybe the most obvious and immediate choices, Ella and Ellie rank well as independent names, too. But if you’re looking for long and short options, Eleanor called Ella or Ellie works.

Many parents shorten Eleanor to Ellie. After all, it fits our pattern of taking the first syllable of a name and adding -ie. But Elle makes a spare and elegant alternative. Elle made waves in 2001, when Reese Witherspoon first played a smarter-than-she-looked Harvard law student by the name in Legally Blonde. It inspired a sequel, and even a Broadway musical. And it filtered into the mainstream as one of the most appealing Eleanor nicknames.

This one makes the list thanks to British Baby Names blogger Eleanor “Elea” Nickerson. It also fits into a special category, like Greta for Margaret and Eliza for Elizabeth. They’re short, feminine names that liven up a more serious, classic choice.

Elsa and Elsa traditionally come from Elizabeth – well, Elisabeth, where the ‘s’ occurs naturally. But it’s not a stretch to imagine an Eleanor adopting either of these nicknames. And yes, Elsa is awfully Frozen, but the character is consistently heroic.

You can almost see Lane in eLEANor. The sound misses a little, and yet, it could work. If Elaine feels too old school for you, Eleanor-called-Lane might appeal.

Is it Lea, like Leia from Star Wars? Or Lea, like Leah and Lea Michelle? I’m saying it like Star Wars, but I think both are defensible.

Leelee sounds cute – maybe too cute for a future CEO or aerospace engineer. But as a nickname for a child? It fits right in with lots of choices, including Elsie and Laney from this list.

Boyish nicknames for traditional girl names combine the best of both worlds. So if Charlotte can answer to Charlie, and Alexandra to Alex, maybe Eleanor shortens to Leo, too.

E! original series The Royals gave us a hard-partying Princess Eleanor a few years ago. She preferred the nickname Len.

It could be short for Selena or Magdalena or any -lena ending name. But it works for Eleanor nicely, too.

Supermodel Heidi Klum’s eldest is Leni – short for Helene. But this German nickname works nicely for Eleanor, too.

There’s no shortage of formal names to shorten to Nell. But I think Eleanor feels especially traditional. That’s because the N comes from an old affectionate phrase: mine Eleanor or mine Elle. Smoosh it together, say it fives times fast, and you’ll arrive at gentle, old-fashioned Nell.

Nola is short for New Orleans, Louisiana – NO LA. But it’s also a sparky choice that connects just enough to Eleanor to serve as a nickname.

We often think of Nora as a stand-alone name, and that’s been true for ages. But Nora probably started out as a short form of names like Eleanor.

If you’re going to use a nickname/formal name combination for your child, here’s some advice:

What are your favorite Eleanor nicknames? Have I forgotten any? 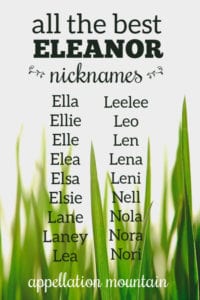 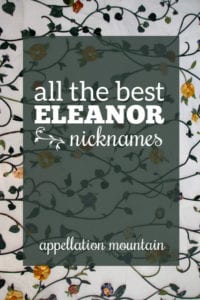