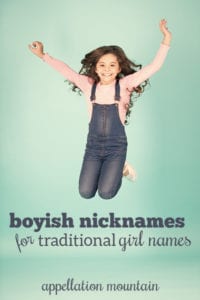 They split the difference between controversial Boy Names on Girls – BNOG – and strictly feminine options. If he says Ryan Marie while you’re thinking Lucinda Elise, maybe Samantha-called-Sam works for you both.

Boyish nicknames can be one of the benefits of choosing nickname-rich options. Picking a classic name is like giving your kiddo a build-your-own-adventure variety pack. They’re Legos, infinitely flexible, with the act of invention and discovery built in to the name.

We can all rattle off the obvious picks. There’s Dani for Danielle. Stranger Things has reminded us that Max works for Maxine. But let’s look at some of the less familiar boyish nicknames from classic girl names. There are more than you might expect!

We default to Alex, but it’s not the only option. You might borrow Sasha – masculine in Russian, but often perceived as feminine in the English-speaking world – or maybe Xan, Zane, or Lex. And while we typically get to Andi or Andy from Andrew and Andrea, the sounds are found here, too.

At first glance, Aurora seems almost nickname-proof. Except Rory is waiting in the middle syllable. It transforms princess-perfect Aurora into something a little more rough-and-tumble.

I think you can also get to Rory for girls from Caroline, Marjorie, and Victoria. And, of course, The Gilmore Girls immortalized the idea of Rory-from-Lorelai.

The second syllable of Bridget is pronounced Jett, and I think that works well.

In fact, Jette has long been a feminine nickname in Dutch, used for lots of girl names ending in -ette, like Mariette. (Though the pronunciation is different.) It appears in Scandinavian languages, too, again for -ette enders.

Charlotte often reduces to Charlie. But Caroline developed as a feminine form of Charles, too. So Caroline called Charlie? Why not.

Other unconventional Charles nicknames might work for both feminine names, too. Chase and Harley probably work best for Charlotte; Arlo and Rory might follow more logically from Caroline.

Eleanor reduces to Ellie and Nora. But boyish nicknames are waiting, too. Leo feels like the boldest of choices, and Len is another option.

Len and Leni or Lenny can come from Helen or Leonora or any of the interrelated cluster of names. Leonora, of course, lends itself to Leo even more directly.

We tend to forget that Frank comes from Francis, but it does. And so Frankie makes an obvious choice for any of the feminine forms of the name. There’s lady-like Frances, of course, but also romance language Francesca and vintage Francine.

It’s also worth noting that Geo, rhymes with Leo, could be a great alternative. Both work for any of the George names. Think Georgina or Georgette called Georgie or Geo, too. And Giorgia – the Italian spelling – gives us Gio.

Fun fact: Jacqueline is the feminine form of James. But we tend to reduce it to the boyish nicknames Jack or Jax, which are associated traditionally with John.

But for something completely different, how about Finn? The letters ‘phin’ appear right there, in the final syllable. And while we tend to rhyme Josephine with peachy keen, sounds change in nicknames all the time. Just ask James-called-Jim and Katherine-called-Kate.

But you could, and Juliet offers more boyish nicknames than you might guess. There’s Jett or Jette, just like Bridget. Jules feels unisex, but is traditionally masculine in French.

And then there’s Jude. Because The Beatles’ “Hey Jude” was inspired by Julian Lennon, Jude is sometimes associated with Julian. And so it’s only a hop and skip to tie Jude to Juliet, too. Of course, Jude comes naturally from Judith, too.

There are plenty of Katherine nicknames out there, but two of the rarer options fit with this pattern.

First, there’s Kit. It evolved as a pet form of Christopher, but it works for Katherine, too. The obvious reason? Katherine shortens to Kat, which brings to mind Kitty … and then reduces to Kit.

There’s also Ren. Ren could come from Lawrence, but the sounds are present in Katherine, too.

Margaret offers a wealth of possible short forms, some obvious – like Maggie – and others only known by traditional use – like Daisy.

But here’s one you might not think of: the final syllable of Margaret gives us the boyish Ret or Rhett. I didn’t think of it, either, actually – credit goes to my fellow name enthusiast, Aela.

Maybe Nico counts as a unisex name, but it fits with boyish nicknames, too. Nicola seems like a logical way to get to Nico. But Danica and Veronica also work well. So do all the other names with a strong ‘nic’ sound. Maybe Annika and Monica belong here, too.

Another boyish option for Nicola and Nicole and any other of the Nicol- names? Cole.

Not only is Theodora relatively rare today, it’s dripping with nickname options.

Two of them count as boyish, and they’re not a stretch at all. First up: Teddy, a cuddly nickname name shared with Theodore. But just as Leo comes from Eleanor and Geo from Georgia, Theo makes an obvious option for Theodora.

Both boyish nicknames also work for the even rarer Theodosia, which comes with a built-in Hamilton lullaby.

William remains an evergreen choice for boys, but a feminine form? In English, that’s proved challenging. There’s Wilhelmina, of course, the kind of elaborate, European possibility that appeals to some. Will Smith used Willow. And there’s also Willa.

Any of those feminine Wil- names lead to boyish Billie. Unlike Theo or Rhett, there’s a long history of girls called Billie, like tennis champ Billie Jean King, singer Billie Holiday, or actor Billie Piper, known for turns as Rose on Doctor Who and Lily on Penny Dreadful.

Those are my picks for the best boyish nicknames from classic girl names. What have I missed? Are there any you would consider for a daughter?
First published on September 2, 2019, this post was updated on April 6, 2021. 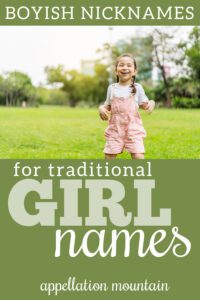 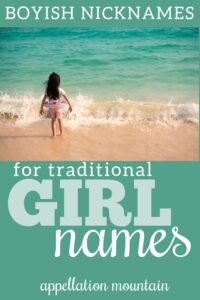