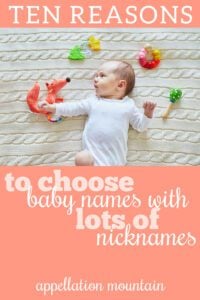 Names with lots of nicknames are everywhere. It’s why you’re not sure if your new colleague Elizabeth is a Liz or a Beth. And it’s the reason Robert makes a point of saying “please call me Rob” after every introduction.

And yet, parents sometimes raise a wary at eyebrow at nickname-rich names. After all, life is complicated. Having your everyday use match your legal identity? There are plenty of good reasons to embrace this approach.

But names with lots of nicknames come with plenty of benefits, too. So before you drop Margaret, Charles, and Evangeline from your list, consider these ten reasons to embrace nickname-rich choices.

THE UPSIDES OF NICKNAME-RICH NAMES

It frees us to use cute – even cutesy! – short forms.

Not sure if Lulu works on a district attorney? Fretting that Freddie won’t be taken seriously someday?

Put Louisa and Frederick on their birth certificates. And then they can choose a sweet short form for their entire lives … or gracefully grow into their longer name.

Formal names signal the gravity of a special occasion.

In religious and academic ceremonies, a formal name is the equivalent of a well-cut suit.

Make no mistake – Callie can earn a PhD and a Nobel prize, too, but Caroline might be the dressed-up name to engrave on the medal.

It’s worth noting that there’s almost always choice involved. Maybe you’re Max instead of Maximilian at your casual, backyard wedding – but if you’d ended up marrying in a cathedral, Maximilian could have felt like the appropriate choice.

That’s the beauty of names with lots of nicknames – they dress up and down.

Nicknames can honor a loved one while still making space for individual identity.

Naming a child after grandma Betsy is simpler if her given name is Elizabeth. You, too, can write Elizabeth on the birth certificate but call your little girl Eliza.

It can even make a family name dance. Katherine might always the firstborn girl’s name in your family, but Kiki is your daughter.

Formal names can soften a trendy or risky name.

Let’s say you love breezy, modern Jax, but aren’t sure how you’ll feel about it in twenty years.

Naming him John or James Xavier leaves space for Jax to keep his edgy nickname name or change it to Jack or Jamie or James down the road.

Names with lots of nicknames can feel affectionate.

Nickname-rich choices make it easy to distinguish between your public and private selves.

The dentist calls you William. But only your sister knows when you’re Will, Billy, or Bud.

Of course, she might also call you Swamp Monster or Billykins. That’s traditionally how nicknames operated. But there’s plenty of space for names that aren’t quite so out-there to serve as affectionate, in-family kind of terms of endearment.

Sharing names gets a little easier with nickname-rich names.

But two classmates named Isabella might be Isabella and Bella. Or Izzy and Bea. They’ll both have choices.

Names with lots of nicknames function even better in extended families. Maybe you and your brother both want to name your sons after dad. But his Robert answers to Robbie, while yours is always Bo.

Grand or unusual names might become a little more wearable.

Maximilian and Magdalena are mouthfuls. They’re long and traditional names that we all know … but might not immediately spell correctly.

Using a nickname – whether that’s Max or Miles, Meg or Leni – can help make such names feel more accessible.

What if you ARE the nickname type?

Parents sometimes reject names with lots of nicknames because they think they won’t ever shorten their child’s name.

But then they’re holding their sweet, cuddly newborn and finding that Holden is much too grand. Next thing you know, he’s Holdie instead. Or much as you love the name Riley, her slightly older sister can’t call her anything other than Ry-Ry.

What’s wrong with room to grow?

We buy our children’s winter coats with a little room, assuming they’re grow between November and March.

And so that adorable baby Charlie might benefit from having Charles in the back of the closet, ready for when he grows into it.

Names with lots of nicknames preserve your child’s choices.

Maggie is like a mini skirt – attractive, but there’s not a lot of fabric to work with. But Margaret is a ball gown, with layers to parse:  Greta, Margo, Margaret in full. Nickname-rich names offer the gift of easy reinvention.

Where do you stand on names with lots of nicknames?

NAMES WITH LOTS OF NICKNAMES: GIRLS

NAMES WITH LOTS OF NICKNAMES: BOYS

Bill, Will, Wills, Wim, and more

But wait, you might say: how can I explain that my Charles is a Chase, or my Victoria answers to Queenie?

It takes some effort – and a willingness to speak up. In general, look for opportunities to use and emphasize – whether that’s in conversation or by personally backpacks and other gear. Be willing to gently remind those in your life who need to know – and to ignore situations where it’s less important. And it can help to announce both your child’s name and preferred nickname at birth.

For more tips, check out this article.

Do you like name with lots of nicknames? Which ones are your favorites? 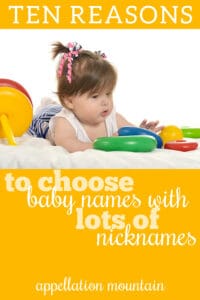 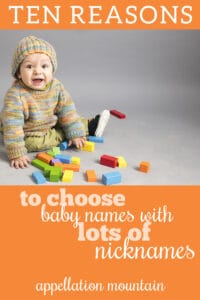