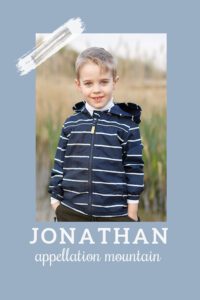 The baby name Jonathan sounds like an elaboration of evergreen John. But there’s so much more to this story.

While John was riding high, Jonathan usually stayed in the shadows.

Not too far behind, though.

The baby name Jonathan has ranked in the US Top 1000 every year since the data was first reported in 1880.

As it happens, John and Jonathan are not related.

John comes from the Hebrew Yochanan – Yahweh is gracious.

Meanwhile, the baby name Jonathan comes from the equally Hebrew Yehonatan or Yonatan – Yahweh has given.

Nathan, Nathanael, and Nathaniel are, however, related to Jonathan through the element natan – to give.

OLD TESTAMENT to the MIDDLE AGES

In the Old Testament, Jonathan was the name of a warrior. He’s remembered as a true and loyal friend to King David, known for his bravery, and his tragic death.

Other Biblical figures answered to the name, too.

It continued in use, and the name appears in medieval Europe.

LONDON, DUBLIN, and the NEW WORLD

The baby name Jonathan features in some interesting parts of history.

Author Jonathan Swift would become one of the best known satirists of his age. Gulliver’s Travels might be his best known work, published in 1726. Swift lived in Dublin, serving as Dean of St. Patrick’s Cathedral.

Across the Atlantic, several notables answered to the name.

Jonathan Trumbull served as governor of Connecticut during the American Revolution. Trumbull was the only governor to side with the Patriots, and went on to advise George Washington. Trumbull also committed troops and money whenever possible to support the Revolution.

Before we had Uncle Sam, the personification of the US was Brother Jonathan. It may be linked to Washington’s affectionate nickname for his friend … or not.

Also during the eighteenth century, pastor and theologian Jonathan Edwards became a significant figure in American religious history. He also served as the third president of Princeton University.

There’s also 1970 bestseller Jonathan Livingston Seagull, a novel about an ambitious bird who decides to fly higher. Still in print decades later, the slim little volume probably put the baby name Jonathan on the radar of many a future parent.

But that’s still not obscure. Instead, Jonathan has appeared across decades, centuries, even millennia.

Besides to obvious Jon and Jonny, there’s also:

Current bearers of the name continue to put Jonathan in the spotlight. Author Jonathan Franzen and actor Jonathan Rhys Meyers come to mind. But they’re really just two more in a long line of accomplished bearers.

It’s easy to overlook this name, since John is so common. But the baby name Jonathan clearly qualifies as a steady classic.

What do you think of the baby name Jonathan?

First published on August 1, 2011, this post was revised substantially and republished on December 29, 2021.