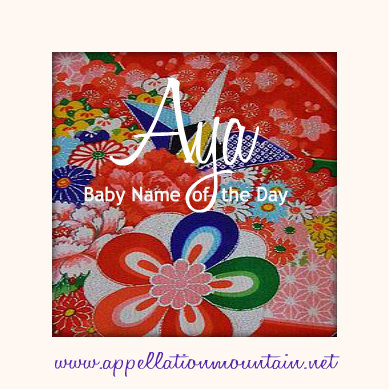 She’s a super-short name with a meaning and origin to please anyone.

Thanks to Michelle for suggesting Aya as our Baby Name of the Day.

Mini names tend to be shape shifters, heard in many languages, with ties to multiple given names.

From the common to the obscure, you might find Aya listed as:

She’s also popular in Belgium and Spain, and she’s been catching on slowly in the US.  A handful of girls received the name in the 1970s, so few that they might all be Japanese-American families looking for a cross-cultural possibility.

But today Aya is on trend for another reason.  We’re more interested in short names than ever before.

Ava and Mia are both in the US Top Ten.  Zoe and Eva aren’t far behind.  You might also meet girls named Amy, Ana, Ivy, Gia, Lea, Lia, Nia, Tia, Ada, and Ali as well as single-syllable choices like Mae, Liv, Sky, and Joy.  For some parents, the ideal twenty-first century name is spare, simple, and nickname-proof.

She shares sounds with Ayla, Isla, and Anya, names that have attracted attention in recent years.

Aya fits the mini-names trend, and has the added appeal of being nicely cross-cultural.  For families eager to find a name that isn’t too closely tied to one background, Aya solves the riddle in a compact, current package.