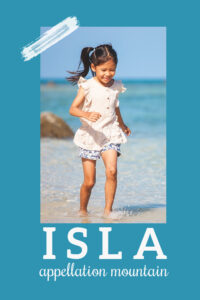 The baby name Isla has quickly become a twenty-first century staple for our daughters.

If your first exposure to Isla was Spanish 101, or maybe Madonna’s 1987 single “La Isla Bonita,” you may have assumed the name was pronounced EES-lah.

That’s accurate en español, but the name that’s rising fast today is not the Spanish word.

In fact, Isla has a silent ‘s’ – EYE-la. It’s Scottish, from the island of Islay.

Isla is simply an older spelling of Islay. It’s part of the inner Hebrides and known for its traditional whisky distilleries. 79 separate islands make up the archipelago, half inhabited and half not. Islay is considered the Queen of the Hebrides, the southernmost island in the chain.

So what does Islay mean, exactly?

The name was recorded as Il, Yla, Ila, Ilea, and Ile – the Gaelic spelling – over the centuries.

One story tells of a Danish princess – or possibly a goddess – named Yula. She filled her apron with stones and set off to find her beloved. As she walked, the stones fell and formed the Scottish Hebrides.

She never found him, and it’s said Islay was her final resting place.

While it’s quite romantic to imagine that a wandering princess lent her name to the island, it’s probably not so.

But whisper Yula to Islay to the baby name Isla, and the name would eventually catch on. It just took a dozen centuries or so.

Fisher played Sophie Kinsella’s beloved Becky Bloomwood in the big screen version of Confessions of a Shopaholic. She was Henley in Now You See Me and Myrtle in The Great Gatsby. She’s been busy ever since. The Australian actress returned to the country where she grew up for 2022’s miniseries Wolf Like Me, now streaming on Peacock.

In the US, the name’s rise is closely tied to Ms. Fisher’s success.

But in the UK, especially in Scotland, the popularity of the baby name Isla predates the actress, and she’s not the first notable bearer of the name.

The baby name Isla currently ranks #3 in the England and Wales. The same is true in Scotland.

Isla Elizabeth Phillips is the great-granddaughter of Queen Elizabeth II, daughter of Peter Phillips, son of Princess Anne. While she’s a distant twentieth in line to the throne, the name’s acceptance in royal circles may signal how very mainstream it has become.

The baby name Isla wasn’t unknown in the US. It appeared in the Top 1000 a handful of times in the late nineteenth and early twentieth centuries.

The first version of this post, written in 2008, described Isla as “poised to be the Next Big Thing.”

It wasn’t just Isla, though.

First came Ayla. It entered the US Top 1000 in 1987. Jean M. Auel coined the name for her 1980 bestseller Clan of the Cave Bear. Darryl Hannah played Ayla in the 1986 movie adaptation, sparking the name’s rise. It could be a Turkish name referring to the moon, a Hebrew name meaning oak tree, or simply an invention. As of 2021, Ayla ranked #108.

Factor in #25 Layla and #110 Lyla – choose your spelling for both popular names – and many vowel-forward, ends-with-la names for girls can be found in the current rankings.

But it’s the girl name Isla where the numbers look most dramatic.

It could soon rival current favorites like Mia, Mila, and even Ella.

The baby name Isla has changed dramatically over the years.

It was obscure enough that JK Rowling chose it for a member of the Black family in 2003’s The Order of the Phoenix. (She married a Muggle named Bob and was disowned by her snobbish Wizarding family.)

Since then, it’s become a chart-topper in the US.

Actress Isla Fisher deserves some of the credit. But so does our love of flowing, liquid names for our daughters, particularly short and nickname-proof possibilities.

As for worries about pronunciation? While Spanish speakers may stumble, it’s worth nothing that the ‘s’ is also silent in island.

That similiarity reinforces the name’s ties to the natural world.

Alternate spellings like Iyla are starting to catch on, too.

Not so long ago, this might’ve served as a substitute for favorites like Ava. While those days are past, the baby name Isla remains a short, sweet, complete, and stylish choice for a daughter. The legend tying it to Scotland might make it a perfect heritage option, too.

What do you think of the baby name Isla? 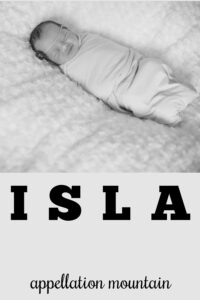