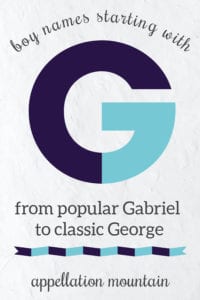 But the letter also includes a big number of surname options, from current favorites to rising possibilities.

Rare and overlooked G boy names abound, too. One of my all-time favorites is on this list, along with a few that might be new to us all.

As of 2019, G represents the fourteenth most popular first initial for boy names. That’s far less popular than chart-topping J or runner-up A. But it’s well ahead of rarities like Q and U.

Speaking of J names, G might feel letter two letters in one, with some hard-G names and others that sound more like a J.

It makes for an appealing list. Read on, and see if your favorite G names are here!

Grayson followed all the long-a Aidens and ends-with-son names straight up the popularity charts. But it still feels polished and buttoned-up, even as we hear it more and more often.

This the second spelling of the name ranked in the US Top 100. Graysen is also in the Top 1000, making this name sound even more popular than the numbers suggest.

A modern Spanish favorite, Gael sounds like Gale – as in The Hunger Games’ Gale Hawthorne. But the name likely owes its rise to actor Gael Garcia Bernal. (And in Spanish, the ‘ae’ sound makes this a little more like two syllables.)

The Spanish equivalent of John, Giovanni is evergreen in Italy. But in the US, it’s only ranked in the Top 1000 consistently since the 1960s. With our appreciation of longer boy names, though, Giovanni and other elaborate Italians could appeal.

Regal and saintly George has been in the spotlight ever since the British royals welcomed Prince George Alexander Louis in 2013.

Gawain saved the day in many a medieval tale. The name was revived as Gavin in the 1900s. By the year 2005, it reached the US Top 50, and has only recently started to fall.

A straightforward and simple boy name, Scottish import Graham feels both timeless and surprising, a name never in the US Top 100, but still instantly familiar.

There’s something about Grant. Originally a surname name meaning grand or tall, Grant has ranked in the US Top 1000 every year since 1880, but has never made the Top 100. It’s a perfect stands-out, fits-in kind of choice.

A gryphon combines eagle wings with a lion body. But Griffin is a Welsh name meaning prince. It’s a twenty-first century favorite, more popular today than ever before.

An Old Testament hero name, rising in use again in the twenty-first century.

The shorter form of Giovanni.

A 1990s star from the same era as Jared, Garrett never quite caught on. But it did help pave the way for names like Beckett and Everett.

A logical successor to Brady, with a great meaning: noble.

Greg is still hanging out in bellbottoms on The Brady Bunch, but Gregory in full sounds rather dashing.

Originally from the same roots as words meaning “to measure,” Gage combines a strong sound with a modern energy.

The name of an influential doctor from the ancient world, Galen’s meaning appeals: calm.

A star-gazing name with a stylish sound.

A name borrowed from Arthurian legend, rare – but familiar – today.

The Normans brought this sleek name to England, though it’s since become rare. Like many a name starting with ger, it means spear.

An Italian name, Giacomo is the equivalent of James. It’s a logical brother for Giovanni.

Miles-with-a-G, Giles feels British and ever so slightly different.

A color name that implies great value, also sometimes heard as a surname.

The furry blue Sesame Street character comes to mind, but before that Grover was a president – Cleveland – and referred to a grove of trees. It could be just as wearable as Forrest.

As dashing as Hollywood leading man from a bygone era, Clark Gable.

Upbeat Irish surname, in the key of Sullivan.

A surname long ranked in the US Top 1000, but rare in recent decades.

A subtle twist on Harrison.

It’s very Bill, but it fits right in with Hayes and Wells.

A surname familiar to all, thanks to F. Scott Fitzgerald’s immortal character.

Originally given to sons of Gib – Gilbert. Gibson now fits in with Jackson and company.

Granger can refer to a granary or a small farm, ultimately from Latin granum – grain. It’s a surname we all know thanks to Harry Potter’s Hermione, but it’s also seldom heard as a first.

Remember hit novel turned movie The Nanny Diaries? The little boy at the center of the plot was Grayer. It sounds like a logical Grayson successor, but remains surprisingly rare.

What are your favorite boy names starting with G? 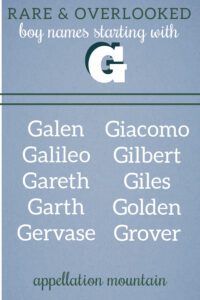 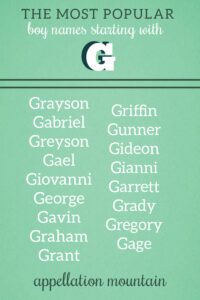 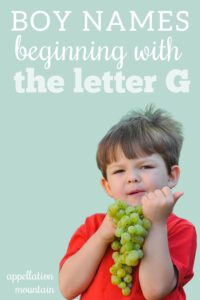