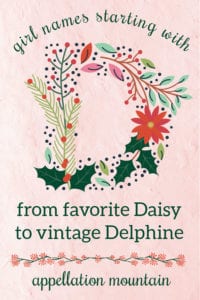 Girl names starting with D include a little bit of everything.

But rare choices abound, too. There’s Doveva and Drusilla, to name just two, plus a nature name that seems ready to soar in the coming years: Dove.

As of 2021, D was the fifteenth most popular letter for girl names. That’s solidly in the middle of the alphabet.

Among the most popular D girl names of all time? Deborah. Along with slimmed-down spelling Debra, they were Top Ten favorites from the 1950s into the 60s. But Debbie is all grown up, and Deb is more likely to be the grandparent than the newborn these days.

Read on for more baby names beginning with D, from chart-toppers to undiscovered gems.

A hit 2005 song from The Plain White Ts pushed this Biblical name up the popularity charts in recent years. (And yes, it’s inspired by a real-life Delilah.) It helps that it includes the stylish Ls shared by Lily, Layla, and Lila, too.

Cheerful Daisy feels as traditional as Rose, but with a more casual vibe. Sometimes associated with Margaret, Daisy most often stands on its own. From The Great Gatsby to Daisy Miller, the name surfaces in literature over the last 150 years or so. Daisy Duck, Daisy Duke, and Daisy Ridley take the name in all sorts of different directions.

The name of a beloved princess, as well as one of the world’s best known superheroes, it’s easy to forget that Diana is, originally, a goddess. In Roman myth, she’s the equivalent of Artemis, a moon goddess and huntress. The name feels classic and just a little bit different, too. Now that The Crown is heavy into the Princess Diana years, perhaps the name will enjoy a bump in use.

The French Danielle’s heyday was the 1980s, but the more international Daniela became a twenty-first century sensation, popular from Spain to Romania.

A surname name in the key of former favorites like Kimberly and Ashley, Delaney ranks among the most popular D names for girls. And yet, it’s never really caught on. Call it a sweet spot surname name – instantly familiar, but not too often-heard.

North and South Dakota were both named for the Native American tribe. Tens of thousands of children have shared the name, too, both male and female. For every Dak Prescott, there’s a Dakota Johnson.

At home in the Mystery Machine with Scooby Doo, this mythological name feels vintage and sparky. It was already on the rise, even before Netflix sensation Bridgerton put the name on everyone’s lips. It’s means “laurel tree,” making Daphne an ecovintage pick, too.

Gorgeous, antique Dahlia is a flower power name from another time. But it still wears well in our age of Lily and Rose.

A word name used by Rob Kardashian and Blac Chyna for their daughter in 2016, and parents took note.

Once a name reserved for Hollywood’s Demi Moore, it’s slowly become a mainstream possibility. Singer Demi Lovato gave it another boost, as did the rise of Remi.

Is Danna another feminine form of Daniel? An update to Donna? A name in the key of Della and Hanna? Maybe all of the above, but Mexican singer and actress Danna Paola probably deserves credit for much of the name’s rise.

A word name with meaning fate, Destiny peaked around the turn of the twenty-first century. It sounds like it would signal luck and good fortunte, but today, you’re more likely to meet a newborn Serenity.

Like Daniela, it’s another feminine form of Daniel, with the long popular -ella ending.

Danielle has gone from girl next door to mom name. But just like Josephine (and Genevieve and Claire and Estelle and Blanche and …) it will be back in a few more generation

In 1939, she wore ruby slippers. By 1985, she was one of The Golden Girls. But with this new generation, Dorothy feels like a vintage name ready for revival.

Legendary fashion designer Christian Dior puts this name on parents’ radar. But it also helps that Dior looks quite a bit like d’or – of gold.

A name borrowed from the boys, Dylan remains a solid favorite for our sons. But, like Ryan and Cameron, a significant minority of girls receives the name every year, too.

A feminine form of David featuring that stylish letter V.

There’s a South American orchid called the Dayana, but the name’s popularity in Latin America suggests that it’s a Spanish (and possibly Portuguese) spin on Diana.

A place name with ties to a blockbuster prime time soap from the 1980s and recently rebooted, Dallas has become a unisex choice in the key of Phoenix.

A Bella-Stella-Ella cousin, rarer than any of those, but climbing in use.

A mini name, short for any of the Daniela/Danielle names, or a feminine form of Daniel that stands on its own.

If Dallas followed Phoenix, then this Colorado place name appears poised to follow them both. It’s even more popular for boys.

Originally short for Andrew, Drew has been sometimes-used for girls for ages. While she wasn’t the first, much of the credit goes to Drew Barrymore. It’s a family surname for the actress.

A Spanish word meaning sweet, Dulce has been a recent favorite. But it has a history of use dating back to medieval Europe.

The Spanish spelling of Dahlia. It’s considered the national flower of Mexico.

From the word darling, Darla brings to mind The Little Rascals. It’s so far out that it’s in.

An ancient Greek name once associated with Artemis and the island of Delos, Delia brings to mind a mournful Johnny Cash song called “Delia Gone,” based on a real-life tragic tale. That taint might put parents off, but the name itself is quite lovely – and blameless.

A lovely French rarity, Delphine is associated with flowers, as well as dolphins.

Sparky Dinah sounds like a midcentury favorite – and it is! But it also feels like a great choice in our age of Norah and so many stylish girl names starting with D.

Originally short for Dorothy or Dolores, Dolly has languished, even while rhyming name Molly soared. Dolly Parton makes this name iconic, a powerhouse of a nickname name.

In Spanish, Dolores means Sorrows. That seems like strange inspiration for a child’s name, but it comes from a title for the Virgin Mary: Our Lady of Sorrows. Nicknames like Lola and Dolly keep it accessible.

An Italian name meaning lady, Donna may also have stood in as a feminine version of former favorite Donald. Ritchie Valens’ hit single “Donna” made the name a smash hit in the late 1950s, but that’s probably why it’s in style limbo today.

If not for the animated Dora the Explorer series, this name could be big right now, just like Nora and Cora. Instead, it’s stuck in style limbo – for now.

The Greek equivalent of the New Testament name Tabitha.

A 1920s favorite, Doris Day pins this name firmly in the past. But if Dorothy is making a comeback, maybe Doris has a shot, too.

Borrowed from a Game of Thrones character, Daenerys was never as popular as the character’s title, Khaleesi.

An Old Norse name, Dagmar is just right for parents worried that Ingrid and Astrid are too obvious.

An English word meaning valley, Dale is a surname more commonly used for boys. But it’s at least occasionally unisex, as in Dale Evans, famous television cowgirl, wife of the equally famous television cowboy Will Rogers. Evans is also remembered as an early, and tireless, advocate for persons with disabilities.

Another spelling of Delilah, used in several languages, as well as Latin.

A surname name with potential.

A sometimes-surname, as in Peter Pan’s Wendy, John, and Peter Darling, it’s an affectionate word well-suited as a middle.

It could be a favorite baby girls’ name today, with ties to the natural world, and a brief, distinctive sound. But Dawn became a smash hit of the 1960s and 70s, especially after Frankie Valli and the Four Seasons recorded “Dawn” in 1964.

A slightly different twist on Delaney, inspired by a New York City street.

A letter D name made famous by television series Poldark. Like the show’s setting, Demelza is Cornish.

A feminine form of Dennis, popular in the 1950s and 60s. More recently, a reality television contestant on Spanish-language competition Exatlón pushed Denisse into the spotlight briefly.

A surname name blending French roots with the style of the American West, thanks to a novel turned movie, Destry Rides Again.

Along with Devorah, the Hebrew form of Deborah benefits from the modern ‘v’ sound.

Borrowed from the flower name.

Borrowed from the Greek god Dionysius.

Rare in English, Dita comes from names like Judita and Edita.

A mix of Davina and the word divine, meaning heavenly.

The French feminine form of Dominic. It’s the title of a 1963 hit song by The Signing Nun. (Yes, really a member of a religious order.) The name skyrocketed in use in the years following.

A short form of the many Dominic-related names, Domino feels musical (thanks to musical legend Fats) but also brings to mind a Bond girl (in Thunderball and Never Say Never Again) and British bounty hunter Domino Harvey.

A long and elaborate Italian name, designer Donatella Versace made it famous world-wide.

A famous Dora name, with the once-popular -een ending. Along with Maureen, Kathleen, and company, it’s now in hibernation.

Currently less popular than Dorothy or Theodora, but sharing the same roots as both.

A bird name that feels likely to soar in the coming years, thanks in part to a list of high profile birth announcements, as well as Disney Channel star Dove Cameron.

A Hebrew name meaning whisper, with an appealing sound.

A New Testament name that may ultimately trace back to a Celtic element meaning strong, Drusilla comes with a modern built-in nickname: Dru.

From the Arabic  for prayer, this mini name is finding a wider audience thanks to pop star Dua Lipa, born in London to Albanian parents.

A name that may have been coined by Miguel Cervantes for his 1605 masterpiece Don Quixote, it’s a long, elaborate cousin to Dulce, with the same meaning – sweet.

What are your favorite D names for girls? 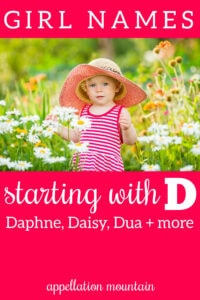 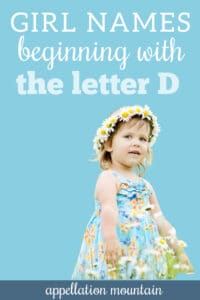