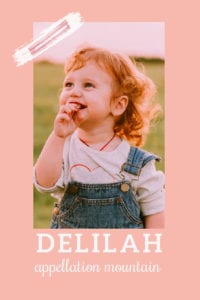 The baby name Delilah combines a stylish sound, a haunting hit song, and a long history of sparing use.

Thanks to Kim R. for suggesting our Baby Name of the Day.

If you were watching Friends in 2002 – and who wasn’t? – you might remember that Rachel and Ross couldn’t immediately decide on a name for their daughter.

Rachel always loved the baby name Delilah, but worried it had a “whiff of Biblical whore.”

They settled on Emma instead, a name already in the Top Ten, compared to Delilah’s frosty ranking of #706.

And yet, the mere mention of the baby name Delilah on such a powerfully popular series gave the name a boost. By 2003, the name rose to #611.

It hasn’t slowed down since.

Where did Rachel’s worries come from?

Her name comes from a Hebrew word meaning “to weaken” and she did just that. Delilah tempted Samson to reveal the secret of his considerable strength. After he confessed that his mojo was in his flowing locks, Delilah sold him out to the Philistines for cash money.

And so Delilah became a synonym for temptress.

Pop culture references continue to drive the point home – from an episode of 30 Rock to more songs that you can list. Whether you’re into the Grateful Dead or the Judds, the Pointer Sisters or the Pixies, choose your genre and you can find a single about Delilah and her shears.

And yet, we live in an era when scholars are reconsidering stories that cast women as troublemakers. We don’t necessarily hear their sides of the story. It’s also easy enough to simply overlook the story.

In some cases, the meaning of Delilah is given as delicate rather than weakened, a more favorable interpretation.

Parents naming their children today might not think of the Biblical character at all.

Instead, this name might be all about the radio.

Easy listening deejay Delilah has long been known for reaching millions of listeners with her syndicated call-in dedication show for decades. It’s the kind of name you might recognize without ever hearing the show itself.

Recorded in 2005, “Hey There Delilah” took a few years to catch on. It was released in the summer of 2007, becoming a major hit, even nabbing a 2008 Grammy nomination and the number one slot on the Billboard Hot 100. It was inspired by a real-life Delilah.

The radio host and the real-life inspiration for the hit song demonstrate that the baby name Delilah has been in steady use all along.

In fact, it charts in the US Top 1000 more years than not. But until recently, the name hovered near the fringes.

Beginning in 1997, the baby name Delilah has consistently appeared in the rankings.

Credit to the song, of course, but something else was happening at the same time.

We had fallen in love with L-l names. Lily and Layla and Lila are everywhere. The L sound is dominant, tucked into chart-toppers like Olivia, Amelia, and Evelyn, sitting at the top of favorites from Luna to Leah to Lucy.

Delilah fit into this pattern perfectly.

The 2010 version of this post read: “Delilah is rapidly shedding the bad girl image and could become one of the hottest baby names of 2015.”

More than a decade later, that has certainly come to pass.

The name has become a mainstream favorite, a romantic name with a stylish sound and just enough history of use to feel familiar. And now that it’s reached the US Top 100, the only question is how high will it climb?

What do you think of the baby name Delilah? 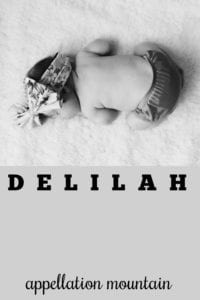