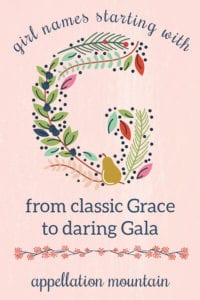 In an earlier age, Gertrude, Gladys, and Geraldine were everybody’s go-tos. Times have changed, though, and another group of G girl names top the charts today.

Some have history to spare. Others are modern innovations. We might not think of G as an especially diverse letter. But it does offer two pronunciations: the hard G and the soft, meaning that a surprising number of options await.

In English, rock solid classic John becomes equally spare Joan and Jane. In Italian, it transforms into the flowing and romantic Giovanna, or just Gianna. Gianna, in turn, shortens to Gia and Gigi, making this a wildly versatile name. It’s also the name of the late Gianna Bryant, daughter of Kobe, another reason to expect this rising name to resonate with parents.

Take elegant, enduring Grace and transport her to a playground. Possibly a farmer’s market, somewhere where there are more horses than humans. Gracie carries all the history of just Grace, but sounds more like a sparky sister for Sadie than an early twentieth century debutante.

Jillian with a J ranks #735, while Gillian with a G fails to crack the US Top 1000. Both names feel instantly familiar, tough to pin to a specific decade, and yet nicely distinctive.

Young activist Greta Thunberg has put her name on parents’ radar. Originally a pet form of Margaret, Greta stands on its own. It manages to sound fresh-faced, while also dripping all the Hollywood glam of Greta Garbo. Plus, everyone can immediately spell and pronounce it … even though your daughter will seldom share it.

Speaking of Gwen, Gwendolyn is slowly climbing the charts. So is just Gwen, but at a steadier pace. For a single-syllable name, there’s lots to love. It has all the cool of comic book hero Gwen Stacy combined with musician Gwen Stefani. But it’s spare and simple, too – not quite as classic as Jane, but not nearly as modern as Sloane. 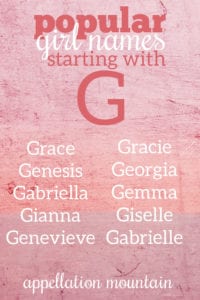 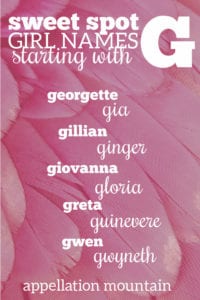