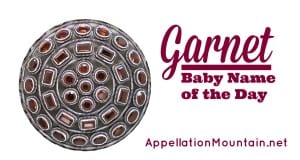 This post was originally published on January 26, 2012.  It was substantially revised and re-posted on January 5, 2015.

Gemstone names for girls are huge, and we’re all about colorful and ends in -et names, too.  If Scarlett and Ruby can chart in the US Top 100, how about this one?

Thanks to Marianne and Larkin for suggesting Garnet as our Baby Name of the Day.

If the 100-year rule applies, Garnet is ready for revival right about now.

If Garnet has history aplenty as a given name, it’s even more storied as a gemstone. Jewelry featuring garnets traces back to 3000 BC.

They aren’t always red, but that’s the most common color.  In fact, the name comes from the French word grenat, meaning dark red, via the Latin granatum.  It’s possible that granatum comes from the pomegranate fruit, famous in the myth of Persephone.  Whether true or not, the color of a pomegranate is about the same as the gemstone.

Unlike diamonds, these gems aren’t top of mind when we think of bling.  And the sound of Garnet is restrained.  It’s a nice compromise – a name at home in the jeweler’s case, but still with a tailored, refined style.

And if your child arrives in January?  This is the birthstone for the first month of the year, making Garnet a seasonal choice more subtle than Winter or Snow.

While the numbers give Garnet to the girls, there’s a long history of Garnet as a masculine name and a surname, too.

There are a few possible origins for the surname, also spelled Garnett and Garnette:

A handful of names feel truly unisex – typically nature names with a tailored sound.  Rowan is the best example, but Garnet fits on the list, too.

After all, names like Everett, Emmett, and Beckett are fashion-forward for our sons, but Violet, Scarlett, and Juliet make the -et ending just as wearable for our daughters.

Above all, Garnet is rare.  In 2013, it was given to just seven girls, and fewer than five boys.

If you’re after something colorful with ties to the natural world, Garnet is an appealing possibility – for a son or a daughter.