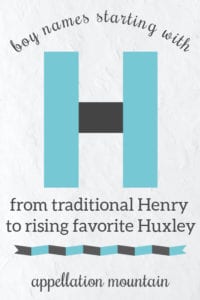 As first initials go, H isn’t a breakout star. It’s no A or J, letters we love for our children’s names year over year. But it’s easy to think of possibilities starting with the letter H, in every category. Classics and trendsetters, rarities and rising favorites all appear on this list.

In recent years, Hudson has been a white hot favorite, a little bit surname name, a little bit place name. According to the list released in May 2019, Hudson was the fifth fastest rising name for boys in terms of overall births.

If K names feel modern, H names – even the most recent arrivals – tend to feel a little more traditional.

There’s an especially appealing category of boy names starting with H that blurs the lines between all the categories: surname names. They range from well-established chart-toppers to undiscovered options – and a dozen of the best rare possibilities come at the very end of this post.

MOST POPULAR H NAMES FOR BOYS

Traditional Henry is king of the H names for boys – but it hasn’t always been so. All names, even the classics, cycle in and out of fashion. Henry has become one of the most stylish of twenty-first century boy names, without sacrificing its enduring status. If anything, parents are now looking for substitutes.

In medieval English, Hugh and Richard became Hud. Because those given names were common, Hudson eventually caught on as a surname. And, in the early 1600s, Henry Hudson set sail for North America. A river and a bay bear his name, so it brings to mind New York – or possibly Canada. But the spark that first put Hudson on parents’ radar? 1991 Bruce Willis movie Hudson Hawk.

Hunter appeals to families with lots of interests. It can read preppy and outdoorsy, like a pair of Hunter boots. Or it can feel at home in camo, at home in a blind. And some might find it aspirational, too. After all, Hunters are seeking a target. Or colorful, thanks to the shade of green. Regardless of the image, Hunter has ranked in the US Top 100 for boys since 1993, making it a modern staple.

Longer surname names for boys are trending in recent years. Think Sullivan and Remington. Harrison benefits from the musical tie-in to The Beatles, too. It’s also the first of several names on this list related to classic favorite Henry.

All of the rhymes-with-Aiden names are falling. But Hayden serves as a great example of how H names feel slightly trend-resistant. Maybe it’s because Hayden started out as a familiar English and Irish surname, unlike the more recent Jayden or Cayden. Or maybe it’s because actors like Hayden Christensen and Thomas Haden Church make it feel like it’s been around longer.

Another H surname name, Holden’s literary status is rock solid. Holden Caulfield narrates The Catcher in the Rye, a literary YA classic from before there was such a thing. But it took a soap opera character to take this name from literary rarity to mainstream favorite for boys. JD Salinger published his novel in serial form from 1945 to 46, but the name debuted in the US Top 1000 in 1985. That’s the same year we met Holden Snyder on As the World Turns.

Like Harrison, we derive the surname Hendrix from Henry and company. And there’s a rock and roll tie-in, too – but this one is even stronger. Legendary guitar innovator Jimi Hendrix remains a household name, five decades after his tragic death. The stylish ‘x’ ending helps, too.

An ancient hero from Greek myth, Hector was a prince and the greatest warrior of Troy. Traditionally popular among Latino families, Hector routinely ranks in the Spanish Top 100. Think of wrestler Hector “Macho” Camacho or actor Hector Elizondo. But the name boasts a long history of use across Europe. It’s the first name of French composer Berlioz.

The hottest of the surname names, Hayes comes from an handful of English and Irish sources. It might relate to Aodh – fiery – which happens to be the source of a former favorite, Aidan. It sounds like haze, but Hayes remains more of a conventional surname name than a novel word-inspired choice.

Hugo sounds current – and cuddly! The o ending makes it stylish, but Hugo offers a long history of use. It’s the Latin form of Hugh, a choice widely used in medieval England. Besides the sense of traditional and appealing, upbeat sound, Hugo offers a great meaning: mind or intellect.

Strictly speaking, Hank is falling as a given name. But with the rise of so many Henrys, as well as Henry adjacent names, it’s easy to guess that we’re hearing more of the nickname Hank.

This English surname name peaked in the 1920s, then left the US Top 1000 entirely early in the 1980s. But it’s back lately, and that might be down to the small screen. The Walking Dead featured a doctor named Harlan Carson. George RR Martin also used it as a character name more than once in his Game of Thrones series, but none appeared on the show. Harlan reads a little throwback, and slightly southern, too. The Walking Dead character had a brother called Emmett, and that homespun vibe is very much on trend.

Brooklyn is a well-established favorite for girls. Bronx remains a celebrity baby one-off. So how about Harlem? It started out as Haarlem, a Dutch place name, imported to New Amsterdam. The northernmost tip of Manhattan still bears the name. But today it conveys more than just a zip code. It’s the home of the Harlem Renaissance, a cultural engine and home to many historic sites.

Prince and Potter, Harry feels distinctively British. But it was a nineteenth century favorite in the US, too, and in 1921, a Broadway show gave us “I’m Just Wild About Harry.” We tend to explain it as a nickname for Henry; it’s closer to say that Harry is the way the English pronounced Henry after the Normans brought it to England. (Say “Henri” in French, then soften the ‘n’ … it’s not quite there, but you can imagine how it happened.) Today it’s a separate name, one that feels approachable, friendly, and maybe even fresh.

A place name set to follow Austin and Dallas up the popularity charts, Houston carries all the bravado of any Texas-inspired baby name. Sam Houston served as president of Texas, back when there was such a thing; his Scottish surname most likely means “Hugh’s town.”

A charmingly vintage boy name, Howard brings to mind all sorts of mixed-up pop culture references. There’s the dad from Happy Days, the duck from Marvel Comic, the actor-comedian of St. Elsewhere, Deal or No Deal, and America’s Got Talent, and the British pop singer from the 80s, to list just a few. Friendly Howie sounds like a great name for a boy in our age of Charlie, too.

If Hugo is climbing, and Houston, too, why not Hugh? It’s an old school Germanic name worn by a tenth century king of France. Brief, traditional, and yet not nearly as common as William or James, Hugh might be the right combination of classic and different.

Credit the middle X, maybe. Or our love of -ley boy names. Maybe it’s the potential nickname Huck. The factors combine to give us a fast-rising boys’ name, a relative newcomer to the US Top 1000. The surname belongs to a famous family of British intellectuals, including author Aldous and scientist Thomas Henry.

Drop the H, and you’ll arrive at popular boy name Adrian. But Hadrian comes closer to the original, the name of a Roman emperor. We remember Hadrian as the builder of the wall that defined the Roman Empire’s northern-most limits, all the way in Britain.

There’s Hans, of course, but Han belongs to Han Solo, fictional smuggler turned good guy in the Star Wars series. It reads like a form of John or Jack, reinvented in a galaxy far, far away. Despite this strong sci fi tie-in, Han feels less obviously borrowed from the franchise than Kylo or Anakin.

Hasan sounds handsome, and that’s the name’s meaning, too. It’s Arabic. You might see it spelled Hassan, but the double ‘s’ is actually a different name.

Harold is a bow-tie wearing boy name today. But in the Middle Ages, Harold was the name of kings. It comes from elements meaning army and power. Today it feels like a grandpa name ready for revival, the next Arthur or Theodore.

Strictly speaking, Heath ranks in the current US Top 1000, so it’s far from unique. But it is surprisingly seldom heard. Consider: Heath offers a strong, bright sound and a nature name meaning. It substitutes nicely for River.

A Japanese name, Hiro’s meaning hinges on the kanji (characters) used to write it. Possibilities include generous, prosperous, and widespread. One of the heroes on early 2000s series Heroes answered to Hiro; he could time travel. There’s also Hiro from Disney’s Big Hero 6.

Yes, there’s Homer Simpson. But long before the fictional Springfield resident ever sipped a Duff, Homer authored the Iliad and the Odyssey, epic poems of adventure that have endured across millennia. The poet explains why the name ranked in the US Top 100 into the 1910s.

An Old Testament prophet, Hosea’s name offers a great meaning: salvation. We’re wild about boy names ending with ‘a’ lately, and the scissory ‘z’ sound of the middle ‘s’ makes this surprisingly cool.

Huck Finn stepped out of Mark Twain’s stories into Americana legend and lore. In the stories, it was short for Huckleberry, but the name increasingly stands on its own, or as a nickname for Huxley, or another Hux name.

Speaking of Hux names, Huxton leads the pack of Hux–n choices at the moment. There’s Huckson, Huckston, and Huxson to name just a few. One more factor possibly pushing Hux names up the list? General Hux, from the latest Star Wars trilogy.

We love Hadley for girls. It sits just beyond the current US Top 100. So why not Hadden for our sons?

A German and Dutch surname with many possible meanings and origins, Hagen appears in Germanic legend.

An archaic word meaning healthy, Hale sounds upbeat and friendly. It’s among the most of the

The mega-hit musical about the life of Alexander Hamilton continues to thrill audiences. Nickname Ham isn’t ideal, but if Sebastian doesn’t need to be Seb and Oliver won’t answer to Ollie, there’s no reason you couldn’t use Hamilton in full.

As with Hamilton, Hammond’s flaw is his potentially pork-centric nickname. But Hammond in full is rather dashing.

An Irish surname name that’s quite rare … and less “mmm … bop” than Hanson.

Like Hale, Hardy is a surname name that implies vigor. It might also serve as an unexpected nickname for Richard.

The town at the center of creepy Netflix hit Stranger Things, there’s something quite cool about Hawkins. Hawk makes a fierce short form.

Spell it Hawthorn, and this becomes a nature name. Add the ‘e’ and it feels more literary, as in Nathaniel. But either way, it’s a rare, but recognizable, entry on the list surname boy names starting with H.

A word name, but also one very common as a surname.

Philosophical Hobbes almost certainly derives from Robert, along with Hobbs and Hobson.

Wildly rare, Humphrey seems to be reserved for pets these days. And yet, leading man Humphrey Bogart proves how well it can wear. (Yes, that was his real name, and his mother’s maiden name.) With choices like Montgomery gaining in use, Humphrey might stand a chance at revival.

Am I missing your favorite boy names ending with H? Would you consider any of these for a son? 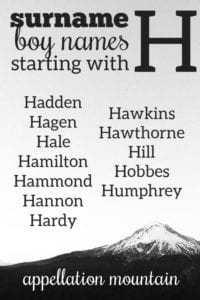 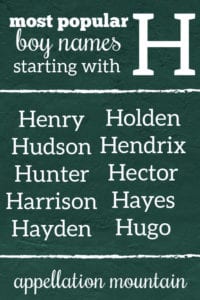