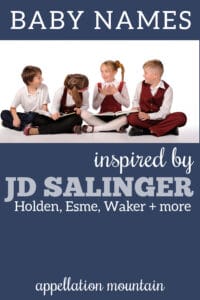 And yet, many of his choices have become quite stylish in the twenty-first century.

We tend to talk about names from Shakespeare. Or the student body of Hogwarts and the rest of the Wizarding World.

But Salinger’s one enduring novel, paired with many beloved short stories, produced some current favorites.

Like many authors, Salinger borrowed from his own experiences. Pensey Prep, Holden Caulfield’s school, is probably based on Valley Forge Military Academy, a school Salinger himself attended. The writer and his most famous character also shared New York city roots. Salinger attended New York University, but did not graduate. He served in World War II, another experience he shared with several characters.

Many JD Salinger character names come from the same complicated family tree. They don’t tend to live happily ever after, either.

Still, they’re such powerful and compelling choices that parents have embraced them in recent years.

Beatrice already reads smart and sophisticated. In Salinger’s writing, she’s the eldest of the Glass family daughters, lending her even more literary sheen. The fact that she’s usually referred to as Boo Boo is something that we can quietly overlook.

In Catcher in the Rye, Holden meets Bernice out on the town. They’re in a nightclub in the fictional Edmont Hotel. She’s described as pretty, and a good dancer. After all, Bernice has been a Top 100 favorite from 1900 into the 1930s; it would’ve been a very appropriate name for a young woman in the 1950s.

A young heiress from 1961 novella The Inverted Forest, and the kind of name that suits parents seeking the unusual, but not outlandish choice.

From Arthurian legend to a Salinger short story. His Elaine is a movie buff from the Bronx who decides against marriage.

The main figure in Uncle Wiggily in Connecticut, unhappy housewife Eloise Wengler is among the only Salinger characters to ever be portrayed on film. Susan Hayward played Eloise in the movie adaptation, re-titled My Foolish Heart.

She’s thirteen year old British orphan wise beyond her years in For Esme – With Love and Squalor. Strictly speaking, it’s Esmé, with the accent, in the story.

Another member of the Glass family, with a short story of her very own. Spunky Franny is short for the demure Frances.

In our era of Sadie and Hattie, doesn’t Ginnie seem like she would make for an appealing choice?

Jane Gallagher is another love interest for Holden.

A disappointed former debutante. Lois Lane might be a more likely source of inspiration.

A soldier’s little sister in a series of war stories, also called Mattie.

She marries into Salinger’s Glass family, the self-absorbed wife of the ill-fated Seymour.

She’s Holden’s little sis in Catcher in the Rye, one of the few people Holden loves without reservation.

Muriel’s mom and Seymour’s mother-in-law … and a rather unpleasant character. But this name from Greek mythology has potential.

Sally Hayes is Holden’s companion in New York during Catcher in the Rye. The name also appeared in an early pre-cursor to Catcher, the short-story Slight Rebellion Off Madison.

From Just Before the War with the Eskimos, and a thoroughly pretty name.

Sybil is a child playing on the beach, the one to whom Seymour Glass spins his tale of the gluttonous bananafish in the 1948 short story.

Zooey is a nickname for Franny’s brother, Zachary Glass. But actress Zooey Deschanel put this name on the map for girls, as an elaborate alternative to the spare Greek Zoe or more phonetic Zoey.

Robert Ackley lives next door to Holden in his dorm at Pencey Prep. While Ackley doesn’t sound especially name-like, surnames have a way of catching on.

Another member of the Glass family. Buddy is a nickname for Webb Gallgaher Glass. It’s said that he’s JD Salinger’s alter ego. This tracks – Buddy is frequently described as a writer in the stories.

From Just Before the War with the Eskimos, a surnamey name with an offbeat, Americana energy.

A complicated figure, the narrator of the novel Catcher in the Rye, Holden Caulfield is a synonym for teen angst. The Caulfields are affluent New Yorkers with ambitions for their children. Other stories, however, make Holden older, even drafting him in World War II.

He’s Franny’s date in her short story, though Lane proves to be rather unexciting.

Another member of the extended Glass clan, a child in Down at the Dinghy.

Many of the author’s characters have a hint of autobiography about them, though none actually answer to Salinger. But it could work as a given name, couldn’t it?

The oldest of the Glass children, he returns from World War II a changed man. His character is appealing, though his ending is sorrowful.

In the final of the Nine Stories in Salinger’s 1953 collection, Teddy is a brilliant child aboard a cruise ship, chatting with a fellow passenger. He seems to be smart, even eerily wise, beyond his years. As with many of Salinger’s prodigies, this is not necessarily a plus.

He’s a brother to Holden, from the short story This Sandwich Has No Mayonnaise.

One of the less-known members of the Glass family, a Roman Catholic monk who never actually appears in the stories.

Another Glass brother, twin to Walker.

Are you a fan of JD Salinger character names? 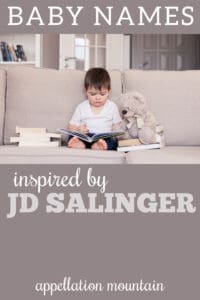