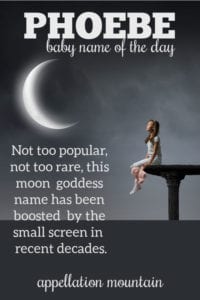 Phoebe refers to a moon and a bird, a witch and a Friend.

Thanks to Breanna for suggesting our Baby Name of the Day.

In Greek, phoibos means bright. The original Phoibe was a moon goddess – grandmama to Artemis in some tellings.

In one famous story, Phoibe falls for a handsome shepherd named Endymion. Zeus grants Endymion eternal youth, so that the lovers will never be separated.

One of Saturn’s moons is named in honor of the goddess, making this a night sky name.

Phoebe is the Latinized spelling, and the English, too.

Besides the moon, it’s the name of a genus of evergreen trees and a small bird. The bird’s song is said to sound like fee bee, hence the name.

If goddesses and growing things aren’t enough, there’s also a Biblical tie. In the New Testament, this name belongs to a Christian woman living in Corinth, often referred to as a deaconess. St. Paul admired her terribly, and she’s considered a saint.

Like many a Biblical name, it first became popular in English following the Protestant Reformation.

If your tastes run towards the literary, this name satisfies: 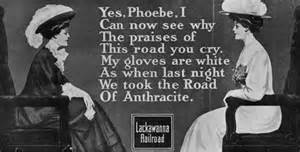 My favorite fictional use comes from the age of rail travel.

Circa 1900, railroad travel was less than elegant. Enter Miss Phoebe Snow, a demure young lady unafraid to travel from Manhattan to Buffalo via the Lackawanna Railroad clad head-to-toe in white, from parasol to high-buttoned shoes.

She was once among the most recognized of corporate icons. Think Progressive’s Flo. Or maybe the Aflac duck.

In the 1980s, Phoebe Cates starred in many a teen favorite, like Gremlins and Fast Times at Ridgemont High. By 1989, the name was back in the US Top 1000 for the first time in over a decade.

But the name really caught our attention thanks to Lisa Kudrow’s quirky character on Friends. The Emmy-winning mega-hit series ran from 1994 to 2004, and Phoebe gained in use. By the time the show left the air, the name ranked in the Top 500.

Then came Charmed, a series about three powerful witch sisters, fighting the forces of darkness in San Francisco. Alyssa Milano played Phoebe for all eight seasons, through 2006.

By the time Charmed ended its run, the name stood at #337.

More recently, Nickelodeon gave the name to the eldest sister on their superhero sitcom, The Thundermans.

But don’t forget our love of Greek girl names ending with ‘e’, from Zoe to Chloe to Penelope. This name probably hits a sweet spot for lots of parents – instantly familiar, but far from overused.

Do you think Phoebe will continue to rise?

This post was originally published on March 10, 2010. It was substantially revised and re-posted on December 28, 2015. Additional updates occurred on November 9, 2019. 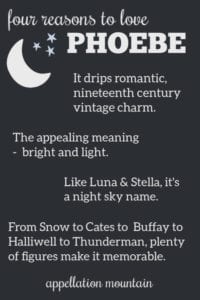