As the days grow shorter and nights darker, it seems like a good moment to consider night owl names for girls – names inspired by the night.

Just like Hermione names and Katniss names have specific qualities, so do night owl names.  They refer, in some fashion, to the night sky.  But they have a pretty, feminine quality, too.  They’re not delicate or frilly, but they can’t be clunky, either.  I’ve dropped Nyx from the list, and dozens of others that fit in terms of meaning, but didn’t quite have the right sound.  (Or was I wrong?  As I read the final draft of this post, is Nyx more wearable that Callirrhoe?)

Night Owl names are the ones that stick when you hear them in the planetarium show.  They’re fluid, lovely names to say.  They’re a little bit poetic, maybe even haunting.

And despite this blend, they’re also perfectly wearable in real life.  Sometimes offbeat and unusual, yes.  But never burdensome or strange.

Laila, Layla, Leila – Spell it as you wish, this name comes from the Hebrew word for night.  It was used in the 600s by an Arab poet, and his romance forever tied Layla to the Arab world.  Then along came Eric Clapton’s enduring 1970 “Layla,” making us all sit up and consider it for our daughters.

Lila – It can be a separate Indian name, or spin on Laila with a shared meaning.  Either way, Lila has also gained in use over the last decade.

Lilith – A lovely way to get to Lily, Lilith comes from an Akkadian word meaning “of the night.”  Except. Lilith is considered a demon in ancient myth, sometimes associated with all sorts of unpleasantness.

Vesper – Vesper Berlin was a Bond girl, but before that, it was a name for the evening star.  Vespers is an evening prayer service. The service is sometimes called Evensong – a choice way too out there to make this list, but could it possibly be a daring middle name choice?

Danica – Strictly speaking, Danica is the morning star, but let’s keep it with the night owls anyhow.  It’s a Slavic name, and while we say the “nic” like Nicole, in most Slavic tongues it’s dah NEETS ah.

Sidra – The Latin sidereus refers to stars – it is the source of our word sidereal.

Sitara – It means star in Hindi.

Stella – Literary through and through, Stella was borrowed from the Latin by a sixteenth century poet, and boosted by a Tennessee Williams play. Plus, it’s the Latin word for star.

Arianrhod – A name borrowed from Welsh myth, sometimes associated with the moon.  It translates to silver wheel – a fitting image for a moon goddess. Listen to it in Welsh here.

Artemis – The goddess of the hunt in Greek myth, and also associated with the moon.

Chandra – From the Sanskrit word for moon, also sometimes used as a masculine name.

Diana – The Roman moon goddess, Diana qualifies as a near-classic choice. It also brings to mind the late Princess of Wales, and, more recently, the rebooted DC Universe take on Wonder Woman.

Luna – Another night sky name on the rise, though this one thanks to Harry Potter and a handful of high profile birth announcements.

Quilla – In Spanish, Mama Quilla is the name of the Inca moon goddess, one of their most powerful deities, depicted as a beautiful woman.  Only trouble?  In English, we usually call her Mama Killa – and somehow, swapping the Qu for a K makes this a non-starter of a name. Still, I think Quilla fits right in with Ella, Stella, and Willa.

Selene – Sometimes another name for Artemis in Greek myth, and sometimes a separate goddess, the personification of the moon. Selena is another option.

Io – A tiny, two-letter name, Io still produces two syllables. It’s a moon of Jupiter and a figure from Greek myth, a nymph who fled the advances of Zeus.

Callirrhoe – Is this one wearable?  The spelling and pronunciation are not intuitive.  It sounds like kah lyr OO ee.  I’m tempted to say Callie Roe, a sort of smooshed name.  Still, this tiny moon of Jupiter is intriguing.  Initially mistaken for an asteroid, and when it was finally identified as a moon, it was named for a river nymph.

Callisto – Another name borrowed from myth for the night skies, this one is more familiar to modern parents.  Blame it on the villainous Callisto on Xena: Warrior Princess.  But there’s also a positive association thanks to actress Calista Flockhart.

Elara – One of the smaller moons of Jupiter, and a lesser known figure from myth, too.  And yet, I think Elara could be very wearable today.

Galatea – One of the moons orbiting Neptune, the name is associated with the statue carved by Pygmalion, the one that came to life.  Galatea means milk white – an appropriate name for a sculpture, or for a celestial object in the night sky.

Helene – A moon of Saturn, the name was inspired by Helen of Troy.  Maybe it is the similarity to Selene, but sleek Helene feels like a Night Owl name.

Leda – One of my favorites on this list, and yet another moon of Jupiter.  Leda and the Swan is a widely known tale of Zeus’ ability to shapeshift in the name of pursuing mortals.  Their  child together was the impossibly beautiful Helen of Troy.  Leda hasn’t been in the US Top 1000 since 1920, making it a little bit vintage revival, a little bit modern discovery.

Thalassa – Girls’ names starting with Th- are an intriguing bunch. Thalassa is one of the more obscure names on this list, but the meaning is rich. It’s the Greek word for the sea, and in their mythology, she was a primordial goddess of the sea. It’s only fitting that Thalassa is a moon of Neptune.

Titania – Queen of the Fairies in Shakespeare’s A Midsummer Night’s Dream, and also the largest moon of Uranus.

Alcyone – It looks like a creative respelling of Allison, but this name belongs to the brightest star in the Pleiades constellation. But just as I left Callirrhoe on the list, there’s something about Alcyone that intrigues me.  Pronounce it al SEE eh nee.

Andromeda – A princess rescued by Perseus in myth, Andromeda gave her name to a constellation, a galaxy, and the name of a popular television series set in space.

Aquila – A strong name, a possibility for a daughter or a son. It means eagle in Latin, and refers to a constellation identified by Ptolemy.  The name is masculine in the New Testament, but is slightly more common for girls today.

Carina – It sounds like a variant of Cara or Karen – and sometimes that may be the name’s origin.  But look to the night sky, and Carina is the keel of Jason’s ship, the one he sailed in pursuit of the Golden Fleece.

Cassiopeia – In myth, this name belongs to Andromeda’s show-off mom. Despite the association, she’s a well-known constellation and a lovely, unusual name – a sister for Penelope, an alternative to Cassandra.

Lyra – A lyre-shaped constellation, we also think of Lyra as the heroine of Philip Pullman’s His Dark Materials trilogy.

Maia – Among the most wearable of star names, borrowed from another star in the Pleiades.  There’s also Merope, familiar to Harry Potter fans, Asterope, Celaeno, Pleione, Taygeta, Electra,  and then one I quite like for boys – Atlas.

Meissa – A bright star in the constellation Orion, with a meaning to match: shining one, from the Arabic phrase Al-Maisan.  Most astrological sites give the pronunciation as MAY suh, which makes it a successor to Macy and an elaboration of Mae.

Talitha – There are two Talithas in the night sky, a Southern and a Northern, both in the constellation Ursa Major.  It’s a nature name through and through – besides referring to two bright stars in night sky, Talitha comes from a phrase referring to a gazelle.  There’s a New Testament link for Talitha, too, from an Aramaic phrase meaning “little girl.”

Vaela – Carina is the keel of Jason’s ship, while Vaela is the sail.

Vega – Too Pulp Fiction?  Maybe.  But there’s also singer-songwriter Suzanne Vega, and many others to wear the surname, which refers to a meadow or a plain.  The star comes from a separate Arabic phrase referring to a falling eagle.

Araceli – Derived from a Latin phrase meaning “altar of the sky,” Araceli originally referred to the Virgin Mary.

Celeste – Celeste isn’t specifically related to the evening, but it does refer to the celestial, earning a spot here. One of Galileo’s daughters, born Virginia, took the name Maria Celeste when she became a nun.

Evening – Noun names are a rich source of possibilities, and Evening offers the logical and wearable Evie or Eve as short forms.

Galilea – It is tough to overstate the contributions of Galileo to astronomy, and his name has been used for countless objects associated with the night sky.  As a given name, it refers to Galilee, the ancient region once home to Jesus.  While Galilea isn’t found in the heavens, there’s something about the name that fits on this list, isn’t there?

What are your favorite Night Owl names?  Are there other names that belong on this list? 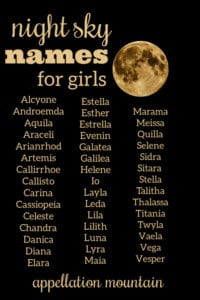 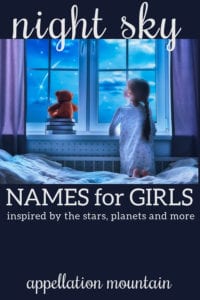 Image by István Mihály from Pixabay