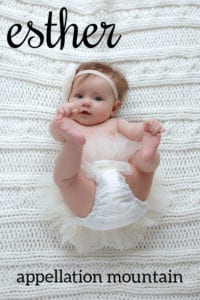 Esther brings to mind a legendary queen and a Hollywood legend. Is this early twentieth century favorite ready for revival?

The most common meaning associated with Esther is star, from the Persian setareh.

That’s my go-to meaning, but others have been suggested, including:

While we’re talking about her birth, the future queen was orphaned at a young age. Her cousin, Mordecai, raised her in Persia. When King Ahasuerus put aside his first wife, Vashti, for disobedience, all the eligible women were sent to the palace for consideration as a replacement. The beautiful young Esther was chosen as her successor.

The politics of the time proved treacherous. Esther and Mordecai helped thwart an assassination plot against the king. Not long after, a Persian prince conspired to kill all of the Jews in the realm. The prince appealed to the king for approval of his plan. Esther risked all to divulge the plan to the king, admitting her own heritage, and ultimately swaying the king’s decision in favor of the Jewish people. The feast of Purim commemorates her triumph.

That makes this a hero name.

Like many an Old Testament name, this one languished until the Reformation. But when US popularity data was first collected in the 1880s, the name ranked in the Top 100.

In 1883, President Grover Cleveland and wife Frances welcomed a daughter, their second. (Her big sister was “Baby” Ruth Cleveland.) It helped push the already-rising name in the Top 50 by 1894.

That makes this a nineteenth century celebrity baby name, of a sort.

Women of distinction wore the name over the years, including:

But the most famous bearer of the name might be Esther Williams.

The California native learned to swim early. She picked up odd jobs at the swimming pool, and also lessons from the lifeguards. By the time she was sixteen, Williams was a three-time national champion.

In 1940, Williams joined the Aquacade, a mix of music, dancing, and swimming. At the time, Olympic figure skater Sonja Henie was starring in a series of successful sports-themed movies for Twentieth Century Fox. MGM discovered Williams, intent on doing the same thing with a swimmer.

During the 1940s and 50s, Williams starred in many a hit movie, many featuring elaborately choreographed swimming sequences.

While she retired from movies in the 1960s, she remained well-known throughout her life, with a swimwear line among many businesses to bear her name.

Esther started out a queen, but for many years, she became a mermaid.

The name peaked in the early twentieth century, remained a Top 100 favorite into the 1930s, and then faded from use by the 1970s, bottoming out in the mid-300s.

Those dates suggest Esther is poised for a revival. Ewan McGregor gave the name to a daughter in 2001. Madonna reportedly used it when she studied the Kabbalah; she later adopted twin girls from Malawi named Stella and Esther – or maybe Stelle and Estere.

If you’re after a frills-free, vintage name for a daughter that feels heroic and brave, Esther is one to consider.

Originally published on November 29, 2012, this post was substantially revised and re-posted on January 30, 2020. 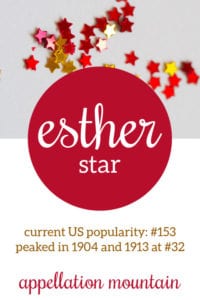