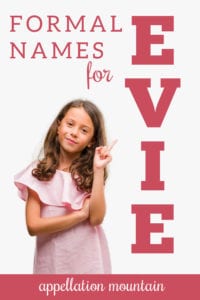 Formal names for Evie range from chart-topper Evelyn to obscure Evolet, with plenty of possibilities in-between. And speaking of in-between, the Evie sound is often sandwiched in longer names, like Genevieve.

One possible point of contention: is Evelyn – with a short ‘e’ – pronounced eh-vee? Parents, as well as the Evies themselves, vary on this point. There’s no wrong answer, necessarily. But it’s worth noting that it’s a choice, as well as a possible source of confusion.

And, of course, you can name your daughter just Evie. It’s a Top 20 pick in England, and popular throughout the English-speaking world, too.

But in the US, we tend to favor formal names for Evie. Happily, there are dozens to choose from!

Tailored Evelyn started out as a surname, spent some time as a unisex choice, and now feels exclusively feminine in the US. It’s also a Top Ten favorite, and, of course, a logical way to get to Evie.

A surname name with rock n roll ties, Everly has become of one the hottest girl names of our moment.

A spare and simple name, Eve is among the most familiar female characters from the Old Testament. It’s also a name that signals hope and new beginnings.

Elegantly French, but widely known in English, Genevieve could easily shorten to Gen, Vivi, or Evie.

Vivian is more popular in the US, but the French form of the name lends itself to the nickname Evie.

BORROWED FROM THE BOYS

It’s a modern staple for our sons, but Evan has been used in small numbers for girls throughout much of the twentieth century. One famous example? Actor Evan Rachel Wood, most recently seen in Westworld and Kajillionaire.

Surname name Everett comes from Everard – a dashing name with Germanic and Old English roots. It’s far more popular for boys, but given our love of -ett ending names for our daughters, it’s not surprising this name appears on some girls’ birth certificates, too – sometimes spelled Everette.

Depending on your perspective, this name is either all Mozart … or all Mistress of the Dark. (Or maybe it’s The Oak Ridge Boys.) The horror show hostess has kept this name off parents’ lists, and yet … we do love an El name AND a middle v. So maybe Elvira is ready for a comeback?

A handful of formal names for Evie come with mix and match spellings. This one could be Evalina or Evelina, to name just two. A 1778 novel by Fanny Burney titled Evelina was a bestseller in its day.

A name invented for the movie 10,000 BC, it comes – more or less – from the phrase “the love” spelled backwards. But it succeeds a sound, an Eve-Violet combination.

Dramatic and romantic, this name from Arthurian legend is seldom heard in the US. It could easily shorten to many other nicknames – Gwen, or maybe Vera, too. But Evie works every bit as well.

A long list of Yv- names comes from the French masculine Yves – yew tree. These are two of the best known.

The Hebrew form of Deborah, Devorah feels fresh and surprising.

Another Hebrew name, it comes from a word meaning “whisper.”

The Hebrew form of Elizabeth, with an Eva ending.

A mysterious name, waiting on the edges across many languages and moments, Evalise could be spelled Ivelisse, Yvelise, or a dozen other ways. While the meaning and origins are obscure, the sound is appealing.

A word name tied to a time of day.

Another word name, this time with a strong virtue vibe.

The Anglo-Saxon Eoforhild is a non-starter, but the Latinized Everild sounds sleek and appealing.

A unisex import from Turkey, with ties to a mythical creature.

A place name that feels two-parts Genevieve, and even more wearable thanks to all these Evie names.

Reverie refers to being lost in thought. It’s a lovely word name possibility.

A name likely invented by Neil Gaiman for Stardust, Yvaine might’ve been inspired by Ywain, of Arthurian legend.

What are your favorite formal names for Evie?