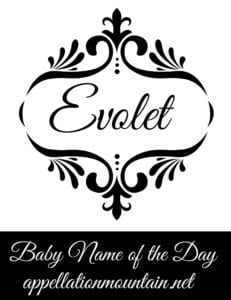 A hit movie can launch a name, but so can an obscure, not terribly successful one.

Thanks to Christine for suggesting Evolet as our Baby Name of the Day.

If Evolet didn’t exist, someone would have made her up.  We’re wild about Evie names, and -et ending names, like Juliet and Violet, are considered quite stylish.

Actually, someone did invent Evolet, just for a movie called 10,000 BC.  It’s set all the way back in prehistory, and tells of a young hunter named D’Leh and his love, Evolet.  She’s kidnapped by another tribe and enslaved.  D’Leh sets out on a quest to rescue Evolet, and ends up freeing a huge population of slaves in the process.

While the movie was widely criticized for historical inaccuracy, here’s one thing that we know for sure: assuming given names existed 10,000 years BC, no records survive.  Brendan Gunn created some of the movie’s languages, but I’m not sure who gets credit for the names.

What we do know is that Evolet is, more or less, “the love” spelled backwards, and her beloved’s name, D’Leh, is “held” backwards.  In German and related languages, held means hero.  Their names are literally their roles.

If that seems silly, consider that Love has a long history of appearing as a given name and a surname, too.  As a surname, it hints at Anglo-Saxon origins: Lufu and Lufa were both given names in Old English.

Evolet also brings to mind Amoret, also invented for a story – but in this case, Edmund Spenser’s The Faerie Queen.  Spenser based his name on the Latin amor – love – so the idea is similar.

The movie claims that Evolet means “promise of life.” It’s not completely outlandish, since Eve means life – or possibly breath.

It makes her one of the biggest baby name debuts of all time.

The only one with any traceable history pre-2008 is Evalette, a name appearing in the 1930 and 1940 US Census records a handful of times.  Evoleht is, of course, literally “the love” backwards, and in our era of Nevaeh and Semaj, it is reasonable to think that someone might have come up with this one pre-movie.  But not so – the first year more than five girls are given the name is actually 2010.

There’s some debate over her pronunciation. Do we say the ‘t’ sound, as in Violet?  Or does Evolet take an ‘ay’ sound, français style?  I can imagine the latter, except that the movie clearly favors the -et version.

I also stumbled on a Peruvian fashion label called Evolèt, but I’m not sure how they’re pronouncing it.

The question is whether Evolet will be a short-lived phenomenon, fading as the movie recedes into the past, or if she’ll stand independently.

It’s too soon to say, but I wouldn’t be surprised if she sticks around.  Forum comments occasionally dismiss her as too close to evil, or other words, like epaulet.  But looking at some of the fast-rising names, that Ev- sound is a favorite.  Think of Everly.

While it is difficult to imagine a parent shortlisting Evolet before 2008, I can easily imagine a parent considering this name in 2015 or 2018, and having never heard of the movie that started it all.