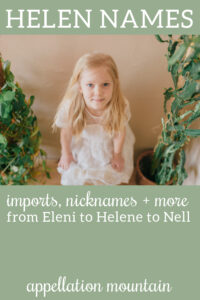 The original Helen of Troy appears in Greek mythology, the most beautiful woman in the world. The daughter of Zeus and Leda, she was promised by Paris of Troy by the goddess Aphrodite. This sparked the Trojan War, a legendary conflict leading to many of the most famous stories of antiquity.

Her name remained in use, across languages and cultures, changing as time passed.

Saint Helena, the mother of Constantine the Great, was one notable figure.

In American history, the inspiring author and activist Helen Keller might be the best known.

Actors like Helen Mirren and Helen Hunt keep the name in the public eye, too.

Along the way, Helen became mixed up with Eleanor. And while the names share nicknames and similar sounds, their origins are distinct.

For many years, Helen ranked in the US Top Ten for most popular baby girl names. While it has fallen significantly since then, it remains a classic choice for a daughter.

Let’s take a look at the Helen names – the ones currently in favor, and the neglected gems, too.

Strictly speaking, Alina is probably a member of the Adelaide family. But spell it with an ‘e’ and Alena becomes a Helen name, a diminutive form of Helena in German and Czech. Both spellings seem to fit on this list. Alene, Aline, and Aleen are sometimes heard, too, but they’re all far less common.

Move over, Isabella. Elena reigns as one of the hottest crossover English-Spanish names of the moment. Both The Vampire Diaries and Elena of Avalor boosted the name, but it’s worth noting that Elena has been climbing since the 1990s.

Elena offers plenty of opportunities for re-spelling. Some of these names run into others. Alaina, for example, is sometimes considered a feminine form of Alan.

Hold the H, and there’s a long list of Helen-adjacent choices that look more like independent names, unrelated to the original. Except that Helen drops the H so often that it’s easy to imagine Ellie honoring a grandma Helen. Or maybe even an Elle.

Eileen, especially, is sometimes considered the Irish equivalent of Helen. As with Elena/Alaina, it’s easy to swap the E for an A and arrive at Aileen.

Elaine comes from Arthurian romance, a name seldom heard until Tennyson chose it for a famous poem about Camelot. It became a go-to favorite for girls in the 1940s. We can all think of an Elaine or three, whether it’s our favorite aunt or the Seinfeld character. And while the name feels a little middle-aged right now, it’s still surprisingly fresh, too.

Helen dropped the H early, becoming Ellen in medieval England. The Dictionary of Medieval Names from European Sources lists Helen, Helena, Ellen, Ellena, and more spellings recorded from the 1100s into the 1500s. While Ellen is out of favor today, there’s a spare simplicity about the name that remains quite appealing.

Helena – the Latinate form of Helen – remains quite rare, even while the similar Sophia and Amelia occupy the Top Ten. Perhaps some of it is the question of pronunciation. While Elena is straightforward, Helena can be heh LEE nah, heh len uh, or heh LAY nuh – with more subtle variations possible.

More modern than Helen or Elaine, Laney and Lainey started out as casual nicknames, or possibly the feminine form of Lane. Laney debuted in the US Top 1000 for girls in the year 2000, bolstered by the popularity of surname name Delaney, as well as the 1999 teen rom-com She’s All That. Starring Freddie Prinze, Jr. and Rachael Leigh Cook in a modern twist on My Fair Lady, the main character answered to Laney.

Lena clearly comes from forms of Helen in some languages. It’s less obvious in English, though – and, once again, prounciation is the issue. Elena takes a long ‘a’ sound, like Jane. But Lena sounds more like Tina and Gina, with a long ‘e’ sound. Still, it would be a mistake to exclude Lena from the Helen names list. It’s an under-the-radar possibility.

A modern Greek spin on Helen, Eleni feels upbeat and high-energy compared to the more sedate Helen. It’s never cracked the US Top 1000, but it is consistently given to more than 100 girls born in the US every year.

Eileen is the accessible Irish version of Helen. Eilidh is a little more like Saoirse – confusing to the eye. The sound is somewhere between Ellie and Aylee, meaning a few of the letters are mostly extraneous – at least to an English speaker.

Pronounced with a long E, Elin sounds different from many of the Helen names. Visually, though, it’s quite close to Ellen. Elin is simply the version heard in Scandinavia and elsewhere in Europe, a spare and straightforward choice. Swedish-born model Elin Nordegren put the name on parents’ radar when she married, and later divorced, golfer Tiger Woods. It’s an intriguing possibility for parents after something just slightly Scandi.

Helen meets Elaine – and becomes phonetic. While both are quite rare, it’s easy to see their appeal – at least, assuming you’ve settled on the long A pronunciation.

Helene is pretty close to the original form of the name, which is still in use in Scandinavia. But not often heard in the US. In Europe, diacritical marks clue native speakers to the correct vowel sounds: Hélène, Héléne, Hélené, Heléne. In the US, Helene would most likely rhyme with Selene and Maureen.

A name straight out of Romanian folklore, and possibly another form of Elena.

It’s either the Hungarian form of Helen, or a name based on the word ilo – joy. Chances are both explain the name’s success in eastern Europe.

A Germanic nickname for Helena, or any other name ending with -lena.

There are plenty of formal names for Nell, but Helen is among the better known possibilities. Nellie and Nella could make this list, too.

The Russian form of the name, made familiar by Yelena Belova of Marvel fame. The bad guy-turned-good assassin appeared in Black Widow, as well as Hawkeye.

It’s tough to argue that Eleanor belongs with the Helen names. We know that they probably have separate roots – one Greek, the other French. And yet, they share many nicknames. And the names were sometimes used as equivalents. Eleanor of Portugal married Holy Roman Emperor Frederick III in 1452. During her coronation, she was called Helena, and one of their daughters was given the name, too. The Dictionary of Medieval Names from European Sources makes it clear that the names are distinct, but they’ve been mixing and mingling for ages. Spellings like Helenora for Eleanor are seen, too.

Another version of Eleanor, this time the German. Add an A, and it becomes the Italian Eleonora.

Another possible spelling of the name.

Drop the first syllable, and Leonora, along with Leonor, Lenora, and Nora all become possibilities, too.

What are your favorite Helen names? Are there others I’ve left off the list?