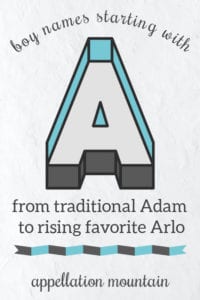 Time to focus on boy names starting with A.

It’s quite the popular initial, right up there with M and J.

Asher has been one of the hottest boy names over the last two years, a fast-rising favorite that didn’t even crack the Top 1000 before the 1980s.

And, of course, it’s impossible to talk about A boy names without thinking about Aiden. Irish Aidan wasn’t on anybody’s radar before 1990. But it quickly became the go-to name for a generation, just add a J, H, C, or maybe a K, Br, or even Z in front of the upbeat syllables.

While this list focuses on English-language names, A feels nicely international, too. Alvaro and Arjun rank in the current US Top 1000, along with Anders and Abdullah. American names, all.

THE MOST POPULAR BOY NAMES STARTING WITH A

Traditional Alexander has always been in the Top 1000, but it’s never been more popular than in recent years. With a commanding sound and a strong meaning – defender of men – it’s a modern favorite with a classic vibe.

Aiden defines a generation. Countless rhymes-with-Aiden names have caught on. But it remains a traditional Irish name with a great meaning: fiery.

Countless Anthonys have automatically shortened their name to Tony. But when used in full, Anthony is rather dashing. Marc Antony reminds us that the name has ancient roots; it picked up the ‘h’ sound in the Middle Ages, probably thanks to the Greek word anthos – flower.

Andrew was such a 1980s favorite that it’s easy to overlook the name’s classic status. From the New Testament apostle to Andrew Lloyd Weber, it’s a name that has featured in the history books across many generations.

It’s new discovery, but not a new name. Asher followed surnames Ashley and Ashton into wider use. It comes from the Old Testament, and carries an auspicious meaning: happy.

One of many Old Testament names that came into wider use following the Protestant Reformation, Aaron feels like a near-classic.

Saints and popes answer to Adrian, to say nothing of the original Roman Emperor, Hadrian. But in the US, it’s really only caught beginning in the 1990s.

Americans have long named their daughters Angela, but Angel makes the US Top 100 thanks to Spanish speakers. Beyond the celestial overtones, it has a great meaning: messenger.

It’s the first name in the Book of Genesis, so Adam? It’s been around. Following a long history of use, it took off in the 1970s, peaked in the 1980s, and remains in steady use today.

It’s the name of a Texas city, borrowed from Stephen Austin, the state’s founder. But long before anyone set a cowboy boot in the Lone Star State, Austin developed as a contracted form of the venerable Augustine.

FAST RISING A NAMES FOR BOYS

It might sound a little invented, but Abdiel is straight out of the Old Testament. Milton borrowed the name for a strong-willed angel in Paradise Lost. It’s more popular in the Spanish-speaking world.

The Italian form of Alexander feels every bit as classic as the more familiar version, but the bright o ending takes it in a different direction.

Alonzo is the sleek, streamlined version of Adolfonso. The ‘z’ makes it especially appealing circa 2020.

An Old Testament prophet, Amos spoke out against the excesses of the wealthy. While it was far more common in the nineteenth century than it is today, nearly any Biblical name has a chance of a comeback.

A muscular, mythological name, Ares is the Greek god of war.

Friendly and approachable, Arlo is among the hottest of the boy names starting with A.

An Italian surname derived from the Germanic Herman, Armani owes its popularity to Italian designer Giorgio Armani, and the luxury brand he founded.

A giant book of maps, named for the Greek god who carried the heavens on his back, Atlas means “enduring.” It’s gone from a wait-what celebrity kid name to a fast-rising favorite.

We love a good mini name. Just ask the parents of Leo and Max. Avi, with the middle ‘v’, has recently entered the US Top 1000, borrowed from the Hebrew – my father.

It comes from the Hebrew word for breath, the name of Adam and Eve’s younger son in the Book of Genesis. But it also brings to mind our word able, as in capable.

Abram became the patriarch Abraham in the Old Testament. Either version works, but there’s something especially appealing about spare Abram.

Alaric sacked Rome in the 400s, a Visigoth king whose name meant “ruler of all.”

We hear it as a surname today, but Alden started out as a given name meaning “old friend.”

It’s the given name of the original Obi-Wan Kenobi, Sir Alec Guinness. Fellow actor Alec Baldwin might be the best known bearer today. There are others, but it’s far less familiar than Alexander, and likely to be misheard as Alex again and again. Still, there’s something neat and complete about Alec, a name that’s just a little bit different.

Alfred might not seem cool at first, but consider nicknames Alfie and Freddie. It’s the kind of grandpa name that’s implausible on a child … until you meet the kid, and then it’s just perfection.

Archie has been edging its way up the popularity charts for the last few years, boosted by the 2017 debut of Riverdale, and then by the arrival of not-exactly-royal Archie Harrison Mountbatten-Windsor.

Worn by a legendary king, and plenty of real-life notables, too, Arthur has slowly left hibernation. Jason Momoa’s star turn as Aquaman Arthur Curry helped, as did the kind-hearted patriarch of the Weasley family in the Harry Potter series. But mostly it was just plain time for this timeless name to feel fresh once more.

There’s something dashing about Asa. Maybe that’s because it was long associated with soap opera billionaire and leading man, Asa Buchanan on One Life to Live. It’s an Old Testament name with a thoroughly modern sound.

August sounds like a summery word name, but actually it started out as a title granted to Octavian, the first Roman emperor. We know him as Augustus, and it’s filtered into use in a variety of forms since then.

If Arthur is back, can Abner be far behind? It has a great meaning: “my father is light.” The Hebrew name is also spelled Avner, which could be a stylish alternative among boy names starting with A.

A superhero name with a serious virtue vibe, Arrow seems like it’s ready to break into the mainstream.

A Scottish spin on Alexander, with multiple possible spellings: Alasdair, Alastair, and Alister have all been seen.

Made famous by television chef-scientist Alton Brown, this surname name would fit right in with so many favorites.

The name of a fourth century saint, as well as a handful of notables like writer Ambrose Bierce. It’s got a great meaning: immortal.

Speaking of immortal, this Sanskrit name shares the same meaning.

German author Michael Ende created this name for the boy warrior in The NeverEnding Story. Adapted as a movie in 1984, it’s been a long-time favorite. According to the author, Atreyu means “son of all.” It’s been used in small and growing numbers ever since.

Golden Aurelio is heard in Spanish and Italian. Americans have embraced feminine form Aurelia, but this ancient Roman name remains obscure for our sons.

It sounds like an invention, in the key of Davion. But Avion is the French word for airplane, so this possibility is every bit as high-flying as Jett.

What are your favorite boy names starting with A? 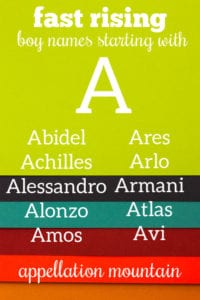 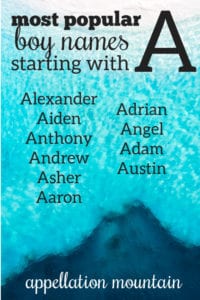