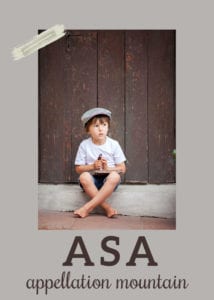 The baby name Asa originates in the Old Testament, but feels right at home in the twenty-first century.

Thanks to Ashley and Liz for suggesting our Baby Name of the Day.

It’s an Old Testament name. Back around the tenth century BCE, Asa reigned as the third king of Judah. The history books report he ruled fairly, at least by the standards of his day, and maintained peace.

Like many short names, other possible origins and meanings attach. It’s a (female) given name in Norse languages. It might also appear – with different pronunciations – as a name, or part of a name, in Igbo, Yoruban, and Japanese. In Portuguese, it’s the word for wing, derived from the Latin word for handle.

Despite all of these possible origins and meanings, English-speaking parents almost certainly found the baby name Asa in the Bible, following the Protestant Reformation.

The American Revolution mentions soldiers like Asa Pollard, who died at the Battle of Bunker Hill, and Asa Danforth, whose son helped developed the city of Toronto. The Danforth is a major city street named after him.

More famous figures followed. Nineteenth century botanist Asa Gray authored the definitive work on North American plants. In the late 1800s, Asa Candler created Coca-Cola. (His son, Asa Candler, Jr., acquired a personal menagerie of animals, which eventually became part of the early days of Zoo Atlanta.) Politicians abound. A number of notable Asas helped establish or grow universities, from Lehigh in Pennsylvania to the University of Washington on the other side of the country.

It sounds distinguished, and for many years, felt a little like an aged ancestor name. There’s a reason soap opera One Life to Live chose the name for the self-made Texas billionaire father of main characters Clint and Bo. The character was introduced in 1979. There’s a small, but noticeable, uptick in the number of boys receiving the name after Asa Buchanan debuted.

By the middle of the 1970s, Asa had returned to the fringes of the US Top 1000. And it’s slowly edged its way up the popularity charts.

But the baby name Asa really gained steam in the 1990s. And that might be all about sound.

And yet, the baby name Asa has only rarely cracked the Top 500.

This unconventional choice debuted in the US Top 1000 in 2006, and has ranked in the Top 300 for the last two years, making it more popular than traditional baby name Asa.

In our age of Chase and Jace, Legend and Maverick, Ace feels like a logical choice for a son.

In many ways, Asa bears all the marks of a rising favorite: the sound, the a-ending, the built-in cool nickname.

Young actor Asa Butterfield, of The Boy in the Striped Pajamas, Hugo, and most recently, Netflix’s Sex Education, has helped raise the name’s profile.

And yet, the name remains slightly obscure. You’re more likely to meet a boy named Memphis, Sterling, or Otto.

That could signal a great opportunity. Asa offers all the strength, history, and meaning of a traditional Biblical name. And yet, with a wildly cool built-in nickname and a bright sound, Asa might be among the most versatile mini names ever.

Would you consider the baby name Asa?