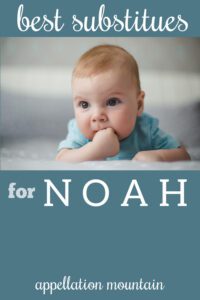 Of course, that doesn’t mean you should avoid it. In fact, there are plenty of great reasons to use a Top Ten – or even the #1! – name.

But maybe you already know a Noah or three. If it’s time to find a substitute, names like Noah should:

That makes Asa a traditional pick with a cool, current vibe. And while you might argue that Asa isn’t nickname-proof – hello, Ace? – it still belongs with names like Noah.

Actors like Asa Butterfield make a convincing case that the name wears well. If you love the idea of Noah, but want something far less common, Asa might hit exactly the right mark.

For pure sound, Jonah makes a great Noah substitute. Plus, both Biblical figures’ stories tie to the sea. Noah sailed for forty days and forty nights, while Jonah was swallowed by a whale.

While it’s less popular than Noah, most people instantly recognize the name Jonah. It’s easy to spell and pronounce and, at least for now, relatively uncommon.

It’s easy to mistake Koa for a trendy spin on Noah. Instead, Koa is Hawaiian, just like current favorite Kai. Like Rowan, it’s borrowed from the name of a tree. Combined, those factors make a strong case for Koa.

Koa first entered the US Top 1000 in 2017 and has quickly risen in the rankings. It’s obviously a substitute choice for Noah, and might sometimes be misheard as the more popular name.

If you thought you liked Noah because it was different? The name you’re looking for might actually be Koa.

Noah built the arc, and Levi built … denim? Not quite.

Like Noah, Levi comes from the Old Testament. He founded the Levites, one of the twelve tribes of Israel. While both names claim religious significance, neither feels specifically or exclusively spiritual.

Instead, they sound modern. For Noah, it’s the ‘a’ ending. For Levi, the letter ‘v’ lends style.

While Levi is powerfully popular, it remains less chart-topping than Noah – though not by much.

Nothing says that all names like Noah must come from the Bible.

After all, Noah appeals to a broad group of parents, from many faith traditions.

And so Milo makes a logical substitute for the chart-topping name.

Like Noah, Milo feels short and complete. It comes with a long history, dating to the Middle Ages. And yet Milo fits with modern names, a 21st century choice.

Like so many o-ending boy names, Milo has climbed rapidly in use in recent years.

Noah and Nash share three of their four letters. Unlike Noah – and Levi and Theo and Milo – Nash debuted relatively recently. If not for a hit 1990s television series, Nash might still be rare.

But the name doesn’t feel invented or artificial. And as a surname, Nash boasts centuries of use.

It ticks all the boxes: stylish, short, nickname-proof.

If Nash is close, but not quite, other single-syllable names with bold sounds, like Jude and Beau, might be worth a look.

Classic, saintly, and regal, Nicholas spent years near the top of the US charts, including a decade in the Top Ten from 1993 through 2002.

But the average Nicholas probably answered to Nick. Only lately has Nico emerged as the Nick name to watch.

Like Nash, Nico barely registered before the 1990s. But Nico borrows the rich history of Nicholas, along with the great meaning: victory of the people.

And like Noah, Nico can potentially be seen as unisex. That’s not a drawback today, but it’s one more reason Nico makes a plausible substitute.

Noah’s strong O sound might be a big reason for the name’s appeal. Owen and Logan and Leo  – and all those other ends-in-o names – demonstrate just how stylish a sound it is.

So maybe Otis could serve as a Noah substitute, too. There’s something vintage about the name, but very twenty-first century at the same time.

Jason Sudeikis and Olivia Wilde named their firstborn Otis Alexander. In 2015, Otis re-entered the US Top 1000 for the first time in ages.

At first glance, Theo seems familiar, but not too common. It’s worth noting, though, that Theodore comes in at #23. And a lot of those little Theodores actually answer to Theo.

Still, just Theo might make a great substitute for Noah – traditional but modern, upbeat but rooted in history.

As with Theo and Nico, associated names are more popular. Ezekiel ranks #65.

But in an age of Zane and Jax and Reed, Zeke stands alone. It’s also fresher than Zach, now that Zachary is growing up.

The Z lends this name some serious modern style. But Zeke also feels vintage, since it’s clearly related to the Biblical name. In recent years, television gave us a character called Zeek instead –  the Braverman family patriarch, played by Craig T. Nelson, on Parenthood.

But Zeke remains the more traditional – and far more popular – spelling for our sons. 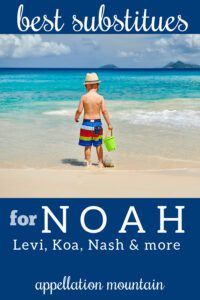