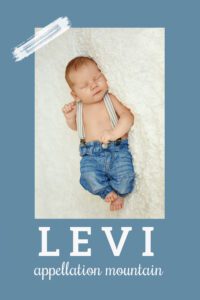 The third son of Jacob and Leah, Levi gave his name to one of the twelve tribes of Israel: the Levites.

That makes the baby name Levi ancient, indeed, along with surname like Levy, Levine, and Loewe.

But, like so many Old Testament choices, it remained rare in Europe until the Protestant Reformation. That’s when Christian parents ditched Catholic saint names in favor of new possibilities straight from the Bible itself.

In Hebrew, the baby name Levi means joined or attached. It might refer to Rachel’s hope that Levi, her third son, would cement her relationship with Jacob. In fact, she says exactly this in Genesis.

The baby name Levi must’ve had a good run in the nineteenth century. In fact, the name still ranked just outside the US Top 100 in 1880, the first year data was reported.

And then there’s Levi Strauss.

Born to a Jewish family in Germany in 1829, Levi Strauss and his family faced discrimination because of their faith.

His older brothers left for America where they started a business; Levi eventually followed. The brothers sold dry goods in New York City. Eventually, they wanted to expand. Levi was sent west to San Francisco.

It was the California Gold Rush. Strauss sold canvas tents and work pants to the prospectors. Some of them found gold, but what’s certain is that once Strauss and Latvian-born tailor Jacob Davis went into business selling riveted denim pants, the family’s fortune was secured.

It’s not just that Strauss and Davis created something necessary and new.

Levi lent his name to the product. Like Kleenex or Xerox, it’s a brand name that stands in as a general term.

In the early twentieth century, jeans were reserved for rugged work. Cowboys and lumberjacks wore them.

As time passed, jeans became a daily go-to for generations.

And now? A new generation treats them like dress clothing.

Brands have come and gone, but Levis appear in every era.

And then the story changed.

Old Testament names began a comeback, one that would eventually put Joshua, and later Noah, in the #1 spot in the US.

A sprawling historical novel about a family living in Colorado across generations, Centennial was published in 1974 and became a mini series in 1978.

Levi Zendt was one of the nineteenth century characters. It was a period-appropriate choice, but it was also a traditional name gaining attention in the era.

Another name inspired by the series, Garrett, also jumped in use.

Denim always had a rugged image. Now it was doubly Western, a brother for Cody and Shane.

But Levi also shared sounds with names on the rise. The middle of Kevin in the 1970s and 80s, as well as Evan in the 1990s; the L of Liam and so many names for our daughters.

For parents seeking a name rich with history, but with a casual, approachable vibe, the baby name Levi delivers.

The mix of the right sound, coupled with a broad set of associations, has pushed the baby name Levi into the spotlight, a traditional name that’s become a stylish staple for our boys.

What do you think of the baby name Levi? 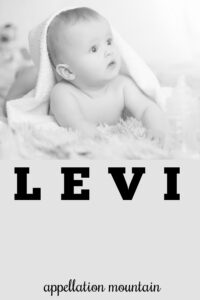