April and her husband are expecting their first child in May.  It’s a boy!

We are having a hard time finding a name we truly love. We have a list of names we like but none of them seem to be it.

I have several hang ups when it comes to settling in on a name: one is the pairing with our last name. Adams. It is so common.  (April adds that she doesn’t love the way surname names sound with Adams, either – and I get it.  Parker Adams could be the kid next door, could be a law firm.)

Another hang-up is I can’t decide if it’s okay to name the baby something beginning in a vowel.  My initials are A.A. and I just can’t decide how I feel about having a child with two vowel initials.

Ultimately I would like to land on something that is uncommon without being weird and flows nicely with our surname. I would love it if the name were literary or historical but that isn’t a necessity.

Those are in no particular order. I think I lean towards Felix because it means happy, isn’t less popular than Asher, and doesn’t start with a vowel, but that’s the one my husband likes the least!

His favorite is Linus, which I think is adorable for a baby/child but have a hard time picturing on a teenager/man.  Also, everyone we have mentioned Linus to has had a negative reaction. I don’t feel like I have to make everyone happy, but I also don’t want to justify our name choice to a lot of opinionated people.

Such good questions, April!  Read on for my answer – and please add your comments and thoughtful suggestions in the comments!

So many great questions in this post!  Let’s take those on before we get to the issue of finding an actual name.

Will this name age well?

It’s such a common concern, and a fair one, too. People talk about the “Supreme Court Justice test” or ask if you can imagine being operated on by a heart surgeon named Hattie.

But there are two things to bear in mind: first, once upon a time Gary was that adorable little boy down the street, the one who played with the neighbor boys, Peter and Donald.  Now Gary is an accountant, Don is a dentist, and Peter teaches high school math.  They’ve become grown-up names because all of the names from that generation grew up.  Sometime around 2070 Kaylee will be an old lady name, simply because all of these Kaylees will be, well, a lot older.

But in you’re a rock solid position, and here’s how I know: the names you love have been there before.  Everyone of those names has gone through the life cycle, from sweet, chubby toddler to grandpa.  This means that men of accomplishment have answered to Felix (he’s James Bond’s CIA sidekick!), Linus (the Pope!), and all of the other names on your list.

How can I avoid the wave of opinionated people?

I think what you’re saying is this: you’re not willing to choose a name so plain vanilla that it cannot possibly bother anyone.  But you’re hoping to avoid something that feels outlandish, that might burden your child in the future, right?

It’s a perfectly reasonable position, and happily, there are many names that are just a little bit different.  You can absolutely find something uncommon, that won’t be perceived by others as weird.

I wonder about the reactions, though – who are they coming from?  There are a few possibilities:

Group A and Group B can safely be ignored.  Why?  They don’t know, end of story.  The most common thing I hear from parents of young kids is “I didn’t know Isaiah/Ava/Harper was so popular when we chose it!”

Group C might be a different matter.  If their children are likely to be your child’s future classmates, they may be telling you that your child’s name will stand out more than you’d like.  Now, they’re not necessarily correct.  If I look at one circle of friends, all the boys are Max and Henry and Alex and Jack.  Draw another circle, and the boys are Kaya, Camilo, Seamus, Ellis, Dario, Sebastian, Avery.  And sure, a few kids with names like Sam.

The only way to answer the Group C question is to know yourself.  If you go to your first playgroup, and you introduce Linus to a circle of moms with kids called Mason, Noah, and Liam, will you feel uncomfortable?

Because the good news is this: unless you’ve named something really one-of-one – think Torch or PeaSoupGreen – after a very short time period, it’s just his name, and 99.9% of everyone gets over it.

Are double vowel initials a problem?

Good question! I think A.A. is associated with Alcoholics Anonymous, so that might give some people pause.  It doesn’t bother me.

But I’m Amy Abigail Sandel.  So let’s have a poll, because I’m clearly biased!

Now, on to a name for Baby Boy Adams!

So far, the shortlists are:

It looks like Julian is on both of your lists, and yet it is Not the Name.  It’s a great name, and at #47 might be reasonably uncommon enough for you to safely consider.  (We know two, but one is five and one is twelve – and they live 300+ miles apart.)  Still, let’s assume that if you loved Julian, you wouldn’t b be here now, and move on.

That leaves Felix, Judah, Asher, Harrison, and Roman.  Omitting all vowel names and surnames, I wonder if you might also like:

And yet, the name that still stands out from your initial list truly is Felix.  Felix sounds distinct from your surname – Felix Adams.  It feels just a little bit different, and yet, with that ‘x’ ending is absolutely on trend and stands out only in a good way.  It’s hard to argue with the meaning.  You’ve sidestepped the whole double-vowel-initials quandary. 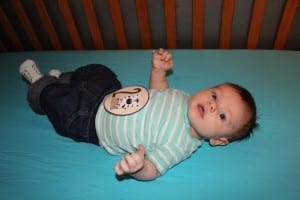 I’d be curious to hear your husband’s reactions to Jasper, Hugo, Dashiell, and Everett.  But I’m even more curious to know if he’s opposed to Felix – because more than anything, that name really does seem to satisfy your criteria.

Update: He’s here, and isn’t he adorable? Welcome to the world, Maxwell Augustus Wilhelm, and congratulations to your lucky family!