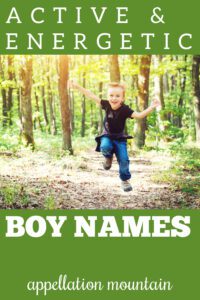 Some of the most stylish boys’ names are word names. Action verb names occupy a special place on that list.

Names like Dash and Chase sound just right for a child. We can picture them running down the sidewalk or pedaling a bike as fast as possible.

Of course, your Dash might be a bookworm. Chase might be more into building with Legos than competing in track and field.

And yet, many action verb names seem downright mainstream.

In fact, some verb names are easy to miss. Grant, Max, and Jack all appear in regular speech. But we don’t have any trouble hearing them as given names.

Other action verb names feel a little more daring. Is Win or Brave too much to live up to?

Some of these might be better in the middle spot.

But we live in an age of bold, distinctive name choices. If you’re looking for something high energy for a son, this list is for you.

A fast-rising favorite, Ace straddles the noun and verb categories. It brings to mind a winning tennis serve, a celebrated fighter pilot, a playing card. But it’s also a verb. You can ace a test or an interview. To ace is to succeed, to excel, to win.

The sound appears in established names like Amy and Amos, as well as surname name Ames. Aim – as in ready, _____, fire – has possibility. With its imagery of goal-setting, it almost fits with modern virtue names.

Faith and Hope are mainstays for our daughters. Could Believe work? With names like Promise and Reign on the rise, maybe Believe fits.

Blaise feels saintly and traditional, but it’s not particularly active. Blaze, however, suggests fire. As a verb, it also means speed, or sometimes to lead the way – blaze a trail, for example.

We brave the elements, we brave adversity. With its resilient image, Brave might make an especially appealing middle.

In the Mountain West, Bridger has enjoyed some use, thanks to legendary frontiersman Jim Bridger. Just Bridge feels a little more active – and almost every bit as wearable.

A case is a box or folder for carrying things. Or maybe a court case. But case could be a verb, if one with a nefarious bent. if you’re casing a joint, you’re inspecting the premises, probably before breaking and entering. Chances are Case isn’t succeeding on meaning, but on sound, just like Jace, Trace, and Chase. Kase-with-a-K is popular, too.

We cash checks, so Cash definitely has a verb vibe. Though this is probably more of a rock star surname choice.

Among the most popular of the modern action verb names, Chase started out as a surname for a huntsman. Today Chase might also be a banker, as rugged and outdoorsy as it is polished. Call it a preppy hellraiser name.

Chart sounds like it could be a name. We chart a course for adventure, or chart our progress towards a goal.

Cruz is the Spanish word for a cross. That makes it spiritual, rather than one of the action verb names. Cruise – as in Tom – means to sail. Or … to cross. Spelled either way, this name fits with Chase and Sway.

Literary Dashiell is seldom heard, but Dash has caught on in recent years. Credit our love of Chase … or possibly Disney-Pixar’s The Incredibles.

We love a good r ending surname. Foster fits with Carter and Hunter. But we can also foster – encourage, nurture, help grow – in a variety of settings.

Stephen King’s Pet Sematary put Gage on parents’ shortlists. But it ultimately means “to measure” and started out as a surname for an assayer – the official who made sure the weights and measures used in trade were correct. There’s something about Gage that feels vaguely virtuous, too, a name that promises fairness.

Perhaps a modern virtue name possibility, a verb that suggests gathering together for a higher purpose.

Grant has a generous meaning – to give. And yet, Grant also has a very long history as a surname and given name. The surname likely started out as a nickname for someone tall – or grand, in French.

The airplane is spelled with just one T – jet. And, as with Grant, the name has a (slightly) different origin than the word. But Jett sounds active, a name that suggests flying – or just moving fast. Jet works, too, but while it might be more clearly linked to aviation, it’s far less familiar.

Actor Judge Reinhold started out life as Edward. But there’s a long, steady thread of boys named Judge. After all, it fits with Justice.

It’s a little bit medieval. After all, Lance started out as a soldier’s surname. But it’s modern, too, a name associated with all sorts of more recent figures, from NSYNC’s Lance Bass to House of Payne’s Lance Gross.

A short form of Lincoln, a video game hero, and a word full of connection and possibility.

It’s a Biblical mainstay. But Mark is a literary giant, too – and maybe among the original action verb names. Samuel Clemens took his enduring pen name from a command used on river boats, to “mark twain.” It means to measure two fathoms, a depth of twelve feet, sufficient for a river boat to pass.

Pace might imply a tempo or a stride. You can set the pace. But you can also pace yourself, moving at a steady rate.

Jason Lee and Beth Riesgraf raised eyebrows with this name for their son. And yet, it’s not so different from Jett. It brings to mind the job title, but “to pilot” means to steer or guide. It’s an appealing image.

At least as wearable as Maverick, to pioneer is to go first. And Pioneer suggests someone who will venture into the unknown. It’s a bold, heroic name.

Two-syllable, ends-with-n names for boys have become modern staples, from Ryan to Mason to Easton. Reason sounds a little like all of these favorites, and yet it’s also a contemplative verb name.

To reign is to rule. A favorite amongst celebrity baby namers, regal Reign is gaining in use with all parents.

Rock brings to mind big hunks of granite. But it can also be a verb, as in “rock and roll” or “let’s rock.” Hollywood A-lister Dwayne Johnson, better known as The Rock, makes this even a little more familiar.

It can mean to glide … or to persuade. And while very few children are actually named Sway, it sounds like a next generation take on Chase.

If we’re naming our dogs Max, maybe we can call our sons Spike? Mike Myers named his son Spike way back in 2011. As a noun, a spike is a big ol’ nail. But it’s a verb, too. We spike the ball in volleyball; something can spike by rising sharply. It’s aggressive, but then, this is the age of Ace.

Country music’s Trace Adkins gets much of the credit for this name’s rise. (His given name is Tracy.) But so do Jace and Case and Chase.

Track feels rugged and outdoorsy, a name for a child at home on the trail. Or maybe in a stadium, because Track and Field is an entire category of ever-so-active possibilities.

Trek is even more out-in-the-wild than Track, a name that suggests adventures far from the beaten path.

Originally, Tripp served as a nickname for a III – think “William James Smith III, call me Tripp.” We think of tripping as clumsy today, but originally, “to trip” was to step lightly. Think of that old school phrase for dancing: trip the light fantastic.

A name with Western swagger, Wade first caught on in the 1950s and 60s. It’s back again, an active verb name with more history than many options on this list.

Is Win too obvious? The Welsh Wyn is another possibility, as are surnames like Winton.

Are there other action verb names that could work for a boy? Would you use any of these in the first spot? How ’bout in the middle?

Originally published on August 30, 2013, this post was revised substantially and re-posted on February 10, 2021. 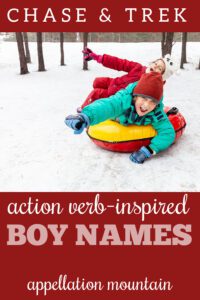 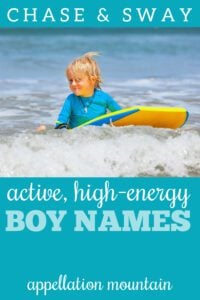