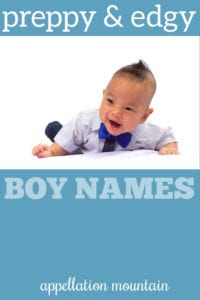 Ruckus and Mayhem might sound cool. But will they remember to take out the trash on Monday night?

Happily, there’s an entire category of choices that feel like bad boy baby names, but only just.

They split the difference between polished and rugged, names that are at home in Brooks Brothers bow ties or L.L. Bean duck boots. If they were fictional characters, they’d be trouble-with-a-trust-fund.

And yet they’re very wearable names in the real world, too. We’ve been using them for ages. Hunter balances exactly on that edge – capable and outdoorsy, a competent adult … but maybe with a little bit of a wild side, too.

Usually surnames, they sound like they could be handed down along with the family silver. Once you might’ve expected to hear them mostly in New England or the South, but that was thirty years ago. Now surname names have gone mainstream, and the more we hear them, the more we look for the next possibility.

And they are abundant!

If bad boy baby names tempt you, but you still hope your kiddo will grow up to be a contributing member of society? This is the list that hits the right note.

We forget that Archer started out as an occupational name for a soldier, but today it’s just right amount of dashing and dangerous.

Stylish and literary, Beckett feels more preppy and polished than bad boy. But shorten it to Beck? Suddenly there’s something wild and free about this name – exactly what this list is all about.

Briggs sounds a little edgy – it’s the kind of name you can growl. But it also seems well-established and traditional, a successor to current ends-in-s favorites like Brooks.

Henry Brooks opened up his haberdashery in New York City back in 1818. It became the blue blazer emporium Brooks Brothers. More recently, this name conjures up Nashville icons like Garth Brooks and Brooks & Dunn, blending the sophisticated and the down-home.

We love a longer surname name for our sons – just ask Sullivan and Cameron. But Callahan – maybe because it’s newer to the US Top 1000 – carries just a little more swagger.

An Irish option that brings to mind a debonair and dangerous figure – Sean Connery as the immortal Bond, James Bond.

Rowing crew seems quintessentially preppy. But Crew also makes us think of wrecking crews and motley crews – the kind of split personality that puts a name on this list.

From crooner Bing to hockey phenom Sidney, you might be able to name a lot of Crosbys. It’s high energy and just different enough.

An archaic word meaning healthy or whole, Hale sounds brief and complete. It’s surprisingly versatile, too, a name for a banker or a pirate.

We don’t normally think of nature names as preppy. River and Elm occupy a different category, right? But with a mix of literary associations and an outdoorsy vibe, Hawthorne hits the middle spot between two extremes.

Either an English place name or an Irish cousin to Aidan, Hayes seems respectable.And yet the sound is so close to haze and hazy. Blaze is an action hero, but Hayes is a preppy hellraiser.

Move over, Logan and Landon. Lawson means son of Lawrence, but it’s an intriguing double name. Lawson sounds a little Wild West, the sheriff in a gold rush town. But it’s undeniably buttoned-down, too – a brother for William or Wyatt.

Mac might be a tough guy. He’s a boxer, a cabbie, the bartender in a rough part of town. But when it’s short for a name like Macallister, it’s surprisingly versatile, adding a dash of debonair Alasdair to rough and tumble Mac.

Classic Peter became Piers in the Middle Ages, and Piers led to the surname Pierce. It sounds like a word – and it is! It comes from the Latin meaning “to drive or force through.” It’s a commanding name that still feels polished.

An upbeat Irish surname name, Rafferty means abundance. (Well, technically “flood tide,” but that’s the implication.) But riffraff? You don’t want them at your country club. And yet, the split between the two images makes Rafferty perfect for this list.

Maybe Remington is a little too tied to the firearms manufacturer. It feels a little too aggressive. And yet, the name has a distinguished sound. And Remy comes from the Latin Remigius – rower. Shades of Crew.

As with Hawthorne, Ridge is clearly borrowed from the great outdoors. But it feels more like a surname than a word choice, and so fits the list.

Bentley is a luxury car, but not an especially preppy name. Royce, though, sounds like a name at home in tennis whites. Nehemiah Royce settled in Connecticut early days; his Wallingford home was once part of the campus of elite prep school Choate Rosemary Hall. George Washington slept there – twice.

Originally a surname for someone who rode horses, Ryder might’ve once belonged to a soldier or a messenger. Today, though, Ryder feels like a preppy hellraiser. The surname is associated with a prestigious golf tournament, but Ryder also brings to mind everything from horses (preppy) to BMX bikes and motorcycles (more on the hellraiser side of the equation).

Maybe in our age of Jaxon, Saxon reads more creative than anything else. And yet, Saxon is a surname, with deep roots in history. (Just think of Anglo-Saxon, the Germanic people who settled Britain in the 400s.) As for Saxon, it refers to a type of knife.

A humble occupation surname, Thatchers were originally roofers. Remember Heath Ledger’s character in A Knight’s Tale? There’s also Margaret Thatcher, Becky Thatcher and Meredith’s day in Grey’s Anatomy, so references are all over the place. But on sound alone, Thatcher fits this style exactly.

Proof that Walker is preppy with an edge? It’s famous as two things – a name in the Bush political dynasty and a television lawman. It’s the W. for both George W. Bush and his father, George H.W. And Walker, Texas Ranger cast Chuck Norris in an iconic role as a Vietnam veteran turned Texas lawman.

It’s outdoorsy – there’s wilderness and the Wild Blue Yonder. And wild is, well, exactly what it suggests. But Wilder is also a long-established surname, worn by figures like legendary director Billy Wilder and author Thornton Wilder. Given how quickly Wilder has caught on, that mix of qualities is powerfully appealing to parents today.

And that’s the essence of a preppy hellraiser baby name – civilized, but only just.

Do these bad boy baby names appeal to you? Or are you more of a Maverick-Legend namer? Or maybe a Henry-Patrick-James type? 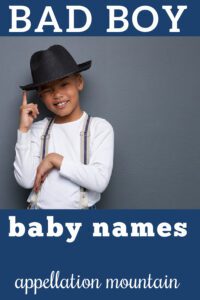 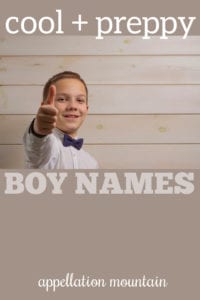