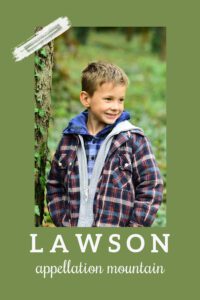 The baby name Lawson feels polished and upbeat, an energetic surname name for a son.

Our Baby Name of the Day comes from this post featuring alternatives to Logan.

Not every name ending in -son implies a parent-child relationship. Jason does not. Nor do Carson, Mason, or Tyson.

But the majority do, if only you can follow the evolution. Jackson is easy; so are Harrison and Anderson. But Dawson comes from David, Watson from Walter, and Hudson? That’s from either Richard … or possibly Hugh.

File Lawson somewhere in between. It developed from Lawrence, which is obvious when you think about it. But because we don’t naturally shorten Lawrence to “Law,” we don’t automatically make the connection.

Classic Lawrence is, of course, evergreen. There’s a third century Saint Laurence, or Laurentius. His name came from the ancient city of Laurentum; in turn, it almost certainly comes from the word laurus, for laurel. Laurel wreaths symbolize victory and Romans wore them in triumph.

The saint was famously martyred, under Christian persecutions in the third century. He’s remembered for refusing to turn over the church’s riches, instead producing the faithful poor, noting that their devotion was the truest thing of value. (Legend says that Lawrence spent three days delaying his execution in order to distribute material goods to those in need.)

The story made Lawrence powerfully popular. People and places have been named in his honor ever since. Even if you’re not Catholic – or religious in any way – the name’s ties to generosity are a plus.

We’ve been handing down family surnames for ages, and borrowing the last names of people we admire, too.

Back then, it probably had more to do with honoring those parents loved or admired. But it helps cement the baby name Lawson as a traditional-ish pick.

Explorer William Lawson arrived in Australia in the year 1800 and made his name exploring the country.

Nearly a century later, Will Lawson moved to Brisbane as a boy. He grew up to become a popular poet and novelist.

But it’s native-born Henry Lawson, son of suffragist Louisa, who makes the name most famous. He’s considered the most important short story author in his country, a sort of Australian Jack London.

Alfred Lawson played professional minor league baseball in the late nineteenth century, then switched to aviation. He published Fly, a magazine devoted to the possibilities of air travel, coined the term “airline,” and even built his own planes. After financial difficulties grounded the fledgling Lawson Aircraft Corporation, Alfred turned to promoting Lawsonomy, his new philosophy/religion.

No question the surname Lawson belongs to some fascinating figures.

But the baby name Lawson returned to the US Top 1000 in the year 2000, after a half-century’s absence.

What explains the revival?

The name rose slowly through the 1990s, maybe because:

A handful of other uses might’ve boosted the name, too. It’s one of the older siblings from the Bates reality mega-family, Bringing Up Bates. The brothers at the center of USA’s Royal Pains answered to the surname, too.

But mostly, it seems like the baby name Lawson succeeded on a mix of style and sound.

The baby name Lawson balances so many qualities in just two syllables.

It fits in with current favorites, like Jackson and Logan.

But Lawson, particularly thanks to those Lawrence ties, feels a little bit old school, too.

Lawson could be at home in the American West of an earlier age – a sheriff, maybe, or a rancher. But the baby name Lawson feels perfectly current, too, a brother for Brooks or Wilder.

If you’re looking for a handsome, capable name for a son that fits in while standing out, then the baby name Lawson deserves a closer look.

What do you think of the baby name Lawson? 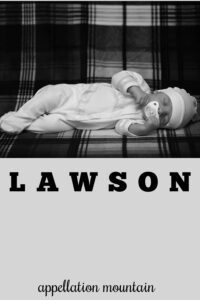