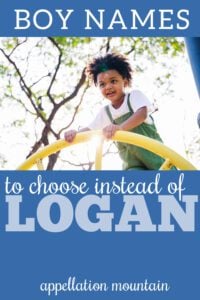 They’re strong, rock-solid choices for a son. Modern, but with a traditional vibe. Straightforward and compact, but with a big sound.

After all, Logan is the alter-ego of the X-Men’s Wolverine, played so famously by Hugh Jackman. That makes it the kind of name any kid would be happy to wear. But it also means parents have heard the name Logan an awful lot over the last few decades.

This list works for families naming a brother for Logan, but it’s also meant for parents who love Logan, but want something a little less popular.

Many of these started out as surnames.

ABOUT THE BABY NAME LOGAN

Logan comes from Scotland, a place name and a clan, too.

Plenty of pop culture uses helped along the way, from comic book heroes to Rory’s preppy boyfriend on The Gilmore Girls.

If you love Logan’s cool, confident style but want something more distinctive, start with this list.

Like Logan, Boone feels rugged and upbeat, a compact name with a big sound. Legendary frontiersman Daniel Boone lends it a capable and masculine vibe. If meaning matters, this one satisfies. It comes from the Middle English boon, meaning good. You might still hear it in phrases like “boon companion.” It also survives as the French bon, good.

Boone is nickname-proof, just like Logan – but it’s far less popular. File it on the list of great, underused names to consider.

Brennan brings to mind former favorites like Brendan and Brandon, but this name is at its most popular right about now. It comes from Ireland, as opposed to Logan’s Scottish roots. But both names have a lot of sound, despite being relatively short names. If Liam and Owen flow, Logan and Brennan bite – in a good way.

Thanks to long-running television series Bones, Brennan sometimes appears on girls’ lists. But so far, it remains overwhelmingly used for boys – just like Logan.

Caspian might feel a bit more romantic and unexpected than straightforward Logan. And yet, the image of CS Lewis’ Prince Caspian feels rather Logan-like. The books present him as heroic, fair, and brave. If Caspian leans slightly more fantasy-inspired than Logan, well, there’s good reason, since it’s The Lion, the Witch, and the Wardrobe series that took this from place name to given name. Both names share an adventurous spirit, though, putting Caspian among the Logan names.

Nothing says that avoiding the most popular baby names means skipping to the opposite end of the list, the seldom-heard obscurities. It’s possible to move just slightly higher and still find something that satisfies. Easton shares sounds with Logan, as well as fellow favorite Ethan. And yet, it’s less popular than either. Seldom heard before the 1990s, today Easton feels mainstream, without being nearly as familiar as Logan. With a strong sound, it makes a great alternative.

There’s something dashing about Flynn. Even though Hollywood legend Errol has been gone for decades, he still lends the name a certain swashbuckling vibe. Flynn’s Irish roots help, too, and the name sounds like fleet and fly – all positives. The man-of-action image squares nicely with Logan, as does the strong, simple sound. There’s a Disney prince named Flynn Rider – from Tangled – and a handful of other pop culture references to keep this name familiar. For some, it might seem too close to the popular Finn and company, but it hits the familiar-but-not-too-common sweet spot.

Flynn and Ford qualify as Logan substitutes for many of the same reasons. They’re both brief, but substantial. Ford feels especially Americana, thanks to the auto manufacturer. But it’s a quiet nature name, too – to ford is to cross a river at a shallow place, and that shallow part is sometimes called a ford. The mix of Americana manufacturing and outdoorsman makes for a powerful combination, one that shares the best qualities of names like Logan.

Sure, you’d hear “Houston, we have a problem,” until it ceased to be funny. (Possibly well before his first birthday.) But if you can overlook that one tired joke, this name feels like a great alternative to Logan. The Texas place name brings to mind so many popular choices for our children, from Brooklyn to Boston, Savannah to London. Like Logan, Houston started out as a Scottish surname, meaning Hugh’s town. Thanks to Texas general-turned-governor Sam Houston, it feels quintessentially Southern. If you love Logan and Hudson, Houston might belong on your shortlist.

Keaton seems a little too preppy to substitute for Logan, but Keegan hits the right note. They both share strong vowel sounds and that distinctive ‘g’. Keegan is cousin to Aidan, if you know your Gaelic surnames and diminutives. (Think MacAodhogan, with Aodh serving as the shared root of both.) A pair of actors have boosted this name in recent years, moving it straight up the popularity charts. Keegan makes a solid choice for a son that isn’t likely to repeat too often.

Lawson leans cowboy, a name at home on the range. Originally derived from Lawrence, it offers an update to that classic name. It shares sounds with Logan, a strong name that could appear in nearly any decade, but is most at home in the the twenty-first century. (Both Logan and Lawson can be found in the late nineteenth and early twentieth centuries, too, but only became common in more recent years.) Lawson has risen quickly in use over the last dozen years, but remains far less common than Logan.

Another Scottish surname like Logan, Lennox owes some of its success to retired world heavyweight champ Lennox Lewis. That stylish letter x boosts it, too. Lennox could feel delicate, thanks to the china – which is spelled with just one n. But the famous boxer puts this one squarely in the boys’ corner – though it also charts in the girls’ Top 1000. A traditional surname name with a hint of an edge – that makes it an obvious suggestion for names like Logan.

Nash owes its popularity to a Don Johnson television series. No – not Miami Vice. The one after that in the 1990s, Nash Bridges. But it boasts plenty of history as a surname, too. Russell Crowe won accolades portraying brilliant but troubled mathematician John Nash in 2001’s A Beautiful Mind. And way back in 1960, Charles W. Nash founded Nash Motors.

That makes this name a little bit Ford, a tiny bit Houston, and a whole lot Logan, too.

Orion almost belongs in the same category as Caspian. Mythological names tend to feel a little dreamier than down-to-earth Logan. Except Orion is the hunter, an image that feels confident and bold – characteristics shared by Logan. Plus, because we’ve been naming our sons Ryan for decades, Orion feels more familiar than it otherwise might. That makes it a promising refresh for so many familiar, but very popular, names – including Logan. The name’s night sky status makes it a brother for Luna or Stella, too.

Paxton might’ve been coined from Payton and Jaxton, but it’s been used as a surname for generations. While pax brings to mind the Latin word for peace, it comes from a long-lost given name, meaning something like Poecc, combined with the -ton ending, indicating town. Paxton stands out, at home in a suit jacket or hiking boots, a versatile name with just enough history to make a great alternative to Logan.

Another common Scottish surname, Reid sounds like a logical brother for Logan. The spelling Reed is also in use, but Reid remains the favorite. With a strong, compact sound and the same surname roots, Reid fits the same style profile as Logan. Criminal Minds and The Fantastic Four have given us fictional Reids, too.

Ryan gave way to Aidan gave way to Liam. Could Ronan be next? Parents love Irish boy names, and Ronan’s strong sounds might make this an appealing option. It shares the long ‘o’ of Logan, as well as that two-syllable, ends-with-n sound. For now, it’s far less common than any of those chart-toppers, which makes it a promising substitute for Logan.

Upbeat and friendly, Sullivan enjoyed some use during the nineteenth century. It returned to the US Top 1000 after Monsters Inc. gave the name to a big blue monster voiced by John Goodman. Despite the surprising inspiration, Sullivan has gained steadily since then, but remains relatively rare. Unlike Logan it comes with built-in nicknames Sully and Van. It also fits with parents’ interest in longer surname names for boys, like Harrison and Montgomery. Despite these differences, Sullivan shares the same vibe as Logan, and makes a great alternative.

Tyson peaked a few years ago, and has been falling since. Sometimes that means a name is trending out of favor; but just as often, it means that a name simply never completely caught on. That can make for a great opportunity. Tyson shares Logan’s straightforward style. It’s every bit as familiar as Logan, without being anywhere near as common. That’s a recipe for a name that will please your child – and his parents, too.