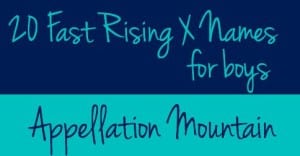 X marks the spot on a treasure map, and it might also signal a great boys’ name.

Sometimes the x is artificial, the product of a respelling or an invented name. But there are plenty of authentic x names for boys, too. There’s even a cluster of x names that could rival the fading -aidens!

Let’s take a look at the 20 fastest-rising x names for boys. It’s anybody’s guess where the letter will pop up – beginning, middle, or end. But what’s certain is that you’ll definitely hear more of these x names for boys in the future.

Hendrix – It’s a rock star surname that balances on the edge of preppy and cool. With classic Henry feeling very stylish these days, no surprise that related surnames like Harrison – which also has rock cred galore, as in George Harrison of the Beatles – ranks #127. Hendrix, combining all that musical legacy with the letter x, soared nearly 200 places to arrive at #546 in 2014.

Axton – Ready for the new choose-your-first-letter trendlet? It’s Axton. Paxton and Braxton are legitimate surname names. Some of the other possibilities … not so much. But Axton is definitely finding fans, rising over 100 places to reach #761 last year. 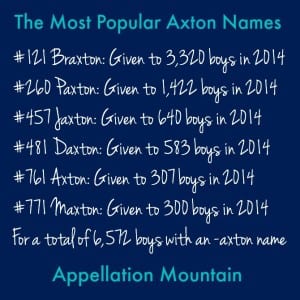 Lennox – This name always makes me think of china, though that’s Lenox with just one ‘n’. Others probably think of world heavyweight champion, retired boxer Lennox Lewis. It’s an interesting mix of strength and refinement in one name. Lennox rose over 90 spots to #585 in 2014.

Daxton – The second of the -axton names, and also a formal name for another of the rising x names for boys: Dax. Daxton was up almost 80 slots to #481.

Knox – Fort Knox is where the US government stores the federal gold reserves, so this name is something of a treasure chest. It’s not unknown, either. There was a Dead Poet’s Society character called Knox back in the day. But once the Jolie-Pitts chose the name for their youngest son, Knox was unstoppable. Among the most popular x names for boys, Knox currently ranks #286, a rise of over 50 places from the prior year.

Maxton – And another -axton name makes the list! Maxton feels more modern than Max or Maxwell or Maximilian, but traditional Max gives this name some roots, too. Maxton was up nearly 50 places to #771 as of 2014.

Dax – Actor Dax Shepard put his short, unusual name on the map. His continued career success – he recently finished a long, successful run as Crosby Braverman on Parenthood – has helped boost his name to #604 in 2014, a gain of nearly 40 spots from the year before. Credit also goes to the very similar Jax, which has come out of nowhere to bound up the charts.

Felix – If Axton and Dax are newcomers, Felix is their opposite. It’s been worn by popes and princes. It was one-half of The Odd Couple, James Bond’s CIA contact, and a very famous animated cat. The list goes on and on. This makes Felix a perfect choice for parents who love x names for boys, but want something with history. Felix rose about 30 places to reach #267 last year.

Phoenix – Part-place name, part-mythical creature, meaningful Phoenix succeeds for many reasons. There’s the family of actors, the spiritual ideas associated with the name, and, of course, it’s yet another of those x names for boys. Phoenix was up almost 30 places to #355 for boys in 2014 – and #494 for girls.

Axel and Axl – Axel is nearly as storied as Felix, a Scandinavian twist on the Biblical Absalom. It feels classic and cool – a very wearable alternative to that everywhere-name Alex. Axel was up another 20-plus spots to #145 in 2014. Axl, once reserved exclusively for Guns N’ Roses frontman Axl Rose – born William Bruce – broke into the US Top 1000 for the first time in 2014, at #850. Credit for Axl’s rise goes to songstress Fergie and her actor husband Josh Duhamel. They gave the name Axl Jack to their son in 2013.

Jax – Jack is the go-to name of the moment, a little tougher than likable Jake, a no-nonsense everyguy. Jax is a 21st century spin on that enduring name. It sounds plural – remember Keanu Reeves’ character in Feeling Minnesota, Jjaks? Or maybe parents think it just sounds a little bit cooler than just-Jack. The name rose over a dozen places to reach #209 in 2014. Tom Arnold has a Jax Copeland. Garcelle Beauvais was ahead of the curve when she named her son Jax back in 2007. 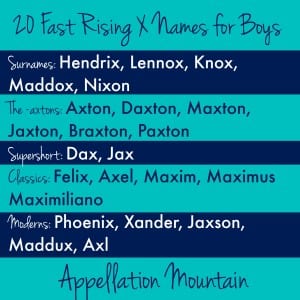 Maxim – If not for the magazine, Maxim could be huge. It’s a Russian and Ukrainian form of Maximus, a surname, and also a pithy saying or principle. And yet, the successful men’s magazine probably gives parents pause. That reluctance may be ending, however. Maxim rose around a dozen places to reach #716 in 2014.

Maximiliano – The most elaborate of the Max names, coming in at a full six syllables! Maximiliano was up ten places to #344 last year.

Maximus – Bold Maximus was boosted by Russell Crowe’s Academy Award-winning turn in 2000’s Gladiator. And why not? It shortens to the very current Max, and fits with all of those ancient and mythological names we’ve embraced in recent years. Maximus was up another eight places to #192.

Xander – Traditional Alexander is firmly installed in the US Top Ten, inspiring parents to look for something just a little bit different. Take off the name’s first syllable, and you have possible Alexander nickname Xander. Joss Whedon used this name for a character in his hit show Buffy the Vampire Slayer back in the 1990s. It’s been rising as an independent given name ever since, gaining another eight places to reach #211.

Jaxson – Add up Jackson, Jaxon, and Jaxson, and this would be the most popular name for boys in the US. Jaxson is the latest respelling, and was up seven places to #85 in 2014. Jaxon was flat at #46 last year.

Maddox – The second Jolie-Pitt name on the list, the name Angelina chose for her eldest son, before she and Brad were a couple. The name has continued to climb, and was up another seven places to #163 last year. Alternative spelling Maddux debuted in the rankings at #988. Maddox isn’t just one of the x names for boys. It’s also a Mad- name, fitting in with Madison, Madelyn, and Madden – all names that have been popular in recent years.

Nixon – Americans love a presidential surname, but … Nixon? The only US president to resign the office? With Kennedy and Carter and Reagan in favor, and today’s new parents born well after the Watergate scandal, Nixon has found new life. It’s originally a surname related to Nicholas. Thanks to our affection for x names for boys, Nixon is up slightly to #585 in 2014.

Braxton – The most popular of the -axton names, a surname that comes from a place a name, probably from a long-lost personal name – either Bracca or Branoc – and, of course, a type of early contraction named after the doctor who first described them, John Braxton Hicks. Despite this unusual pedigree, Braxton is quite the popular name in 2014. It rose another two spots to reach #121. Paxton – which has a similar origin story to Braxton, but no associated medical terms – was also up just two spots to #260.

What are your favorite x names for boys? Would you consider any of the names on this list?