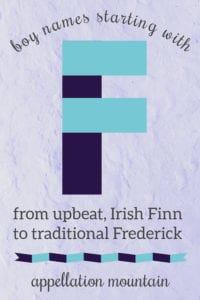 But that relative obscurity hides how many truly amazing boy names start with the letter F.

There’s upbeat, can-do Finn and all of the many Finn names that follow. The Frank and Francis names make for another family, rich with comeback potential. And rarities abound, too, from nature names to imports to surnames that could easily be promoted to the first spot.

If you’re after a name for a son that will stand out, boy names starting with F could be a great place to start.

BOY NAMES STARTING WITH F in the US TOP 1000

Brief and brisk, Finn sounds cool and carefree. Finn MacCool was a hero of Irish legend; Huckleberry Finn, of Americana literature. Originally spelled Fionn, the middle O has long been dropped, at least in English.

A vintage name with an auspicious meaning, Felix’s x-ending helps take this name from antique to edgy.

A surname spin on Finn. Finlay is another spelling option.

The Spanish form of Francis, and the inspiration for California city San Francisco.

A longer surname name in the key of Cameron and Sullivan, with the bonus of nickname Finn.

Benjamin makes it a Founding Father and FDR makes it presidential. But Franklin the Turtle makes it a children’s story, and somehow perfectly accessible for a child, too.

A surname spin on a nature name, Forrest once read Gump. Or, worse, Confederate General Nathan Bedford Forrest. But today parents are almost certainly thinking of all things outdoorsy with this polished, but rugged, choice.

Common as a surname, and strongly associated with the automobile company, Ford feels familiar. And yet, it’s never been terribly common as a first. It’s also associated with river crossings, or the act of fording a stream, which lends this name a different kind of vibe.

An ancient Roman name, Fabian has remained in use throughout Europe. It became mainstream in the US starting in the 1960s, thanks to singer and teen idol Fabian.

Francis started out as a nickname for the future Saint Francis of Assisi, and quickly became a classic, known in nearly every European language. While it’s less popular today, the name remains an enduring choice for a son.

Classic, regal Frederick routinely ranked in the US Top 100 through the 1950s. It’s fallen dramatically since, but could be a great alternative to Theodore, Sebastian, and Alexander. The British are wild for nickname Freddie, and Fred Weasley is a Harry Potter hero. The name’s meaning – peaceful ruler – is another bonus. Spelling Frederic is sometimes seen, too, as in Polish-French composer Frederic Chopin.

Another spelling of Finley that doubles the N to ensure it’s Finn, rather than Fin, for short.

In French, a flèche is an arrow. Fletcher, then, means arrowsmith. (Not the band, but the craftsman.) Just like so many names related to weapons, Fletcher is rising – but it’s more subtle than Remington, or even Archer.

Forrest looks like a surname, or maybe screams Gump. But Forest is a straight-up nature name, woodsy and on-trend.

The Italian equivalent of Frank, it’s been heard in the US for ages. But as an independent name, it’s more popular in our Leo and Mateo moment than ever before.

The Spanish form of evergreen Philip.

It sounds like a straightforward occupational surname, but Christians might find deeper meaning in this choice. In the Gospels, Jesus directed his apostles to become “fishers of men,” i.e., evangelists.

A crafty creature name, Fox feels like a reasonable first name choice to a generation that grew up with Fox Mulder seeking the truth on The X-Files. It’s also heavily associated with the cable network, which might be a drawback.

An Italian surname, originally for someone working as a falconer. It’s a German given name, too, with similar roots.

A common Irish surname, Farrell is seldom-heard as a first. Creative powerhouse Pharrell is the exception, but that’s not exactly the same name. Farrell comes with a stellar meaning: man of valor.

An Arabic surname, originally given to a knight.

Originally a place name, Fenton referred to someone who came from a settlement near marshy land.

Even after a young Matthew Broderick led us through Chicago on the enduring Ferris Bueller’s Day Off, it’s Cameron and Sloane that became mainstream favorites – not free-wheeling Ferris. But with positive associations from strength (the similar ferrous means iron) to the movie character, why not Ferris?

A surname that feels both buttoned-up and outdoorsy, Fielding could follow names like Wilder into wider use. It’s also literary, thanks to eighteenth century novelist Henry Fielding, who authored Tom Jones.

Bird-inspired Finch might’ve come from someone who sold finches, or one who resembled a Finch. For many parents, a first thought is probably Atticus Finch, of To Kill a Mockingbird.

To foster is to nurture; some worry that foster care makes this name feel a little awkward. But the positive meaning of the name, along with its surname style, could win out.

A casual-cool nickname name in the key of Charlie and Jack.

Also spelled Fraser, Frazer, and Frazier, this Scottish surname’s meaning is obscure. But thanks to long-running television character Frasier Crane, who migrated from Cheers to Frasier, it seems perfectly reasonable as a first.

Influential Archbishop Fulton Sheen hosted Life is Worth Living on NBC in the 1950s. Fulton was his mother’s maiden name. The Emmy-winning cleric has influenced at least some parents; Fulton’s surname style likely appeals to even more.

Also spelled Fife, this Scottish surname and place name also brings to mind a flute-like instrument. Think of Fife and Drum Corps, often associated with the military. If Finn and Flynn are too common, brief and complete Fyfe might substitute.

James Macpherson gave this name to his hero in a 1762 epic poem.

Finnian sounds like a logical successor to Julian and Adrian. It’s yet another elaboration of Finn, with a handful of saints keeping it in use.

Invented by Suzanne Collins for a Hunger Games hero, Finnick’s name feels perfectly wearable outside of dystopian YA fiction.

Irish legend says that Fintan Mac Bochra was the only person to survive the Great Flood.

If we’re naming our children Wren and Lark and Fox and Bear, why not Falcon?

Sometimes a surname, Fenn might also be a nature name. That’s because fen is another word for marsh.

The Spanish Fernando way outranks the English version, but this name’s roots are Germanic. The first element means “journey,” and the second means “brave.” It’s an auspicious meaning for a child’s name.

A Scottish and Irish heritage choice, Fergus is immediately recognized as a name – it’s just not one that we often hear in the US.

The Italian version of flower, familiar to anyone who lives in New York City, thanks to 1930s and 40s-era mayor Fiorello La Guardia.

Fitz means “son of,” hence so many surnames like Fitzgerald and Fitzroy. Fritz started out as a nickname for Friedrich, the German form of Frederick. (And it was once a generic term to refer to any German soldier during the World Wars.) Today they’re similarly rare and close in sound, including that distinctive ‘z’ ending. Pop band Fitz and the Tantrums – led by Michael Fitzpatrick – might make Fitz familiar to the next generation of parents.

Flint rock can be sparked to start a fire. It’s a nature/surname/place name close to Finn and Flynn.

A name rich with significance in world events following the death of George Floyd, this name left the US Top 1000 after the 1990s. It came from a Welsh surname meaning gray.

The Italian form of Francis.

A nature name in the key of Winter and Ivy.

The Russian form of Theodore, as in literary legend Dostoevsky.

Those are some of the best boy names starting with F. Do you have any favorites on this list? What would you add? 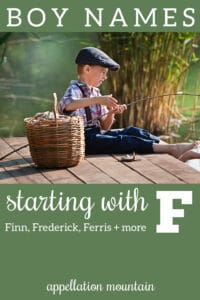 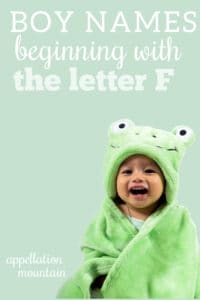