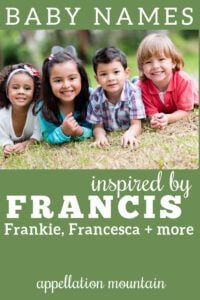 Francis names owe their original popularity to one figure: the thirteenth century Saint Francis of Assisi.

Born the far more familiar Giovanni, the future saint earned his nickname for his father’s love of all things French. Little Francesco became one of the most popular religious figures in the Catholic church – and beyond.

In 2013, Cardinal Jorge Mario Bergoglio was elected pope, and took the name Francis.

Celebrities have embraced the names, too. Jason Bateman is dad to Francesca; Drew Barrymore has a Frankie. Amanda Peet opted for Frances, as did Jimmy Fallon. But the first is called Frankie; the latter, Franny.

Let’s take a deeper look at all the Francis names.

Friend to animals, patron saint of the environment, founder of religious orders that continue nearly a millennia later, Francis is the original. While the -is and -es endings haven’t always rigidly been used for boys and girls, Francis tends to be the preferred masculine form now. Worn by kings and scientists, adventurers and athletes, it’s an enduring classic choice for a boy.

Buttoned-up and ladylike, Frances qualifies as a classic. It’s a substitute for the very popular Charlotte or Eleanor – or maybe a name for their sister. Plenty of accomplished women have answered to Frances. Another bonus? This name is spare and straightforward, but also nickname-rich. From boyish Frankie to retro Fran, there’s a Frances nickname for any personality.

The Hungarian take on Francis is pronounced FEH rents. If obscure European gems is your thing, then Ferenc is a possibility. A perennial Top 100 around Budapest and its ‘burbs, Ferenc is nearly unknown in the US.

Francesca gained in use in the 1990s, peaking around the year 2005. This elaborate Italian possibility sounds like a sister for Alexandra or Isabella. There’s plenty of femininity, but also lots of strength. It’s even more popular in England, where it only recently left the Top 100.

The Italian version of Francis might make you think pasta sauce in the US. Of course, other Italian names, like Giovanni, are having a moment. So let’s not rule Francesco out.

We name our children London and Brooklyn, so maybe France isn’t such a stretch? It also follows logically as a Frances nickname, just like fanciful Francie.

A 1950s favorite with a very French feel, Francine blends a sweet, even dainty sensibility with a capable strength.

Pronounced just like the city by the bay, Francisco is the Spanish and Portuguese form of Francis. Lin-Manuel Miranda named his younger son Francisco in early 2018, a brother for Sebastian. It fits with so many longer, elaborate boy names. It’s been worn by famous figures like painter Francisco Goya, among others.

An Italian take on Frank, sometimes short for Francesco. NFL Hall of Famer Franco Harris is one notable bearer.

If Madeline and Genevieve work, why not the French Françoise? It sounds something like fran SWAHZ, which might not be intuitive – but isn’t actually difficult to say. Drop the final ‘e’ and François is simply the masculine form of the name.

The go-to nickname for Francis in many generations, Frank also stands alone. It ranked in the Top Ten into the 1920s, and remained a Top 100 choice well into the 1980s. It’s a synonym for honest, which almost makes it a virtue name. It remains a solid citizen, an old school choice with plenty of appeal.

Could Frankie be the next Charlie? After all, it’s a casual cool short-form of a time-tested classic. It’s unisex, too – and Frankie ranks for boys and girls alike. Though Frankie seems to be climbing for our daughters, falling for our sons – at least for now.

A surname name, Franklin isn’t actually related to Francis. Instead, it referred to a free man – a gentleman, but not of noble birth – in feudal England. In the US, it instantly brings to mind founding father Benjamin, as well as an animated turtle from children’s book fame. Franklin bridges the distinguished and the approachable with ease.

Indie band Franz Ferdinand borrowed its name from an Austrian emperor. His death sparked the first World War. With the ‘z’ sound so stylish, there might be space for parents to consider Franz. It works as an edgy Francis nickname or even as an unexpected standalone.

What’s your favorite Francis name?  Are there any names on this list that you would consider?  Do you prefer the boy Fran- names, or the girls’ list?