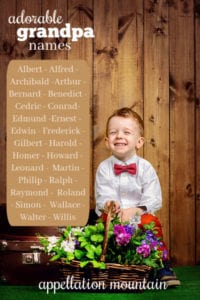 At first, they seem hopelessly out-of-date, misplaced on a playground full of boys answering to Mason and Logan and Finn.

But here are seven great reasons to use adorable grandpa names – and two dozen fabulously fusty names to consider.

Spelling and repeating your name can get old – fast! There’s something to be said for the ease of introducing yourself and knowing that pretty much everyone will recognize it, effortlessly.

We often assume such luxuries are reserved for the most classic of choices – Henry and William and James. But a great many grandpa names come with just one spelling, too. Think of Albert, Howard, or Edwin. One spelling, right? And while the nurse at the pediatrician’s office might tell you that she had a great-uncle with the same name, she’s not asking you to confirm the spelling of Jayden.

Adorable Grandpa Boy Names: But Nobody Shares Them

Okay, the other parent at the playgroup might tell you about her elderly neighbor, Homer. But when they call out names at kindergarten graduation? Odds are strong that your kiddo will be the only little Alvin or Morris.

So many of us crave unusual, even unique names. But sometimes that means we have of two Judes or Olivers – or one of three Jacksons – in the school. Because we all tend to land on the same similar-but-different names. Going old school – like, 1918 old school – can be a great way to find a name that really will stand out in a crowd.

I’ve yet to meet a dentist named Maddox. None of the plumbers or electricians who have done work at my house answer to Easton or Chase. Yet. I know, intellectually, that all of these names will grow up with their generation, just like Josh and Tyler and Brandon are now orthodontists and journalists and the guy who owns the garage.

But grandpa names have been there before. It’s easy to imagine Bernard running for office, or Willis as a chef. They’re grown-up names for little boys to grow into, and we know that it’s happened before – and will easily happen again.

Siblings often argue over the “good” family names. Everybody wants to name their son after mom’s father, William. But dad’s pop Martin? Not so much.

Except what if we look at those dusty names with fresh eyes? Martin could make a great honor name, one that’s unusual enough to be clear you chose it for your loved one. And if it means not having to arm wrestle your sister for a favorite name? That’s another bonus.

Yes, you might meet a girl called Boris or Benedict or Leonard. But it seems downright unlikely, at least compared to modern favorites like Beckett and Ashton and Tate, names that all seem potentially unisex.

If choosing a name that clearly signifies gender matters, then these grandpa choices seem like the safest of options.

The British know it. Names like Alfie and Archie are all over the England & Wales Top 100. In almost every case, even the heaviest of formal names offers a light and cheerful nickname form.

Frederick feels substantial, but Freddie is charming and boyish. Philip is a tenured professor, but Pip plays soccer and loves Legos. When names have so much history, they’ve almost all picked up a sweet nickname or three to choose from.

Another bonus? Super traditional boy names sometimes come with unexpected options. I once met a 20-something Howard called Hoby. And something like Gilbert shortened to Gib is traditional and very wearable, but not widely known.

Ten years ago, nobody was naming their sons Theodore. But over the last few years, it’s been on the upswing, a fresh traditional choice that suddenly everybody loves.

Thirty years ago, the same was true for Henry.

And right now, it’s possible to watch names like Arthur coming back into vogue.

So the wait-what grandpa name you choose for your son today? It might be the next Oliver or Sebastian.

What are your favorite grandpa boy names? Would you consider any of these for a son?