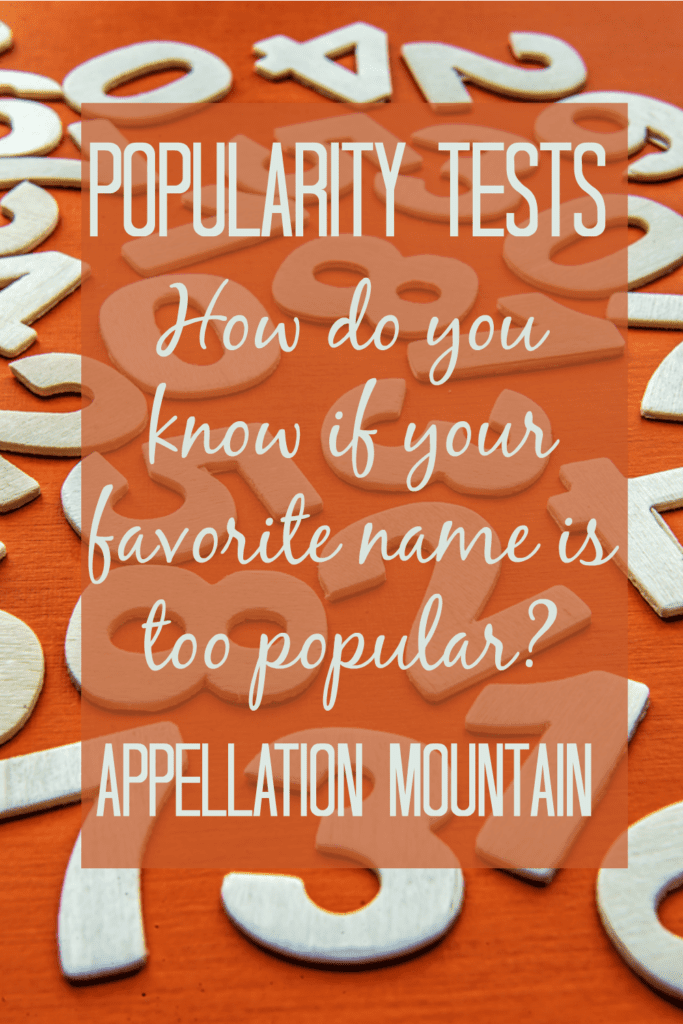 Parents often reject a favorite name because it seems too popular. Or “might be getting” too popular. That’s a pretty squishy statement!

So how can you calmly evaluate whether a name might be too popular?

The bad news: popularity tests cannot predict the future. While data provides plenty of insight, nothing can tell you that six months from now, a sleeper television pilot will get picked up. And that pilot will feature a funny, admirable, good-looking lead character with the same highly unusual name you chose for your child. The pilot will became a smash-hit series, and the character will be everywhere. Your child’s formerly unusual name will soar into the Top 100 overnight.

The good news: lightning seldom strikes. Odds are that popularity tests can accurately help you assess whether the name you love will feel too common.

Let’s consider Emery for a girl. At #134, it seems comfortably outside of the too-popular zone.

Emery would likely be misunderstood as Emily, a long-time chart-topper. Or Emma, currently the most popular name for girls in the US. Plus, Emerson and Emmalyn and lots of other Em- names for girls have become common.

Eva sounds like Ava, Lila like Layla, and Gemma like Emma. On the boys’ side, all of the -aidens can prove challenging, so lately that’s also true of the -axtons.

The Test: Look at the full Social Security Administration data set  and consider other names that sound similar to your favorite. It might not be a dealbreaker, but it is worth recognizing that your Cleo will be called Chloe – a lot.

Sound-alikes can be tricky. But spelling? Spelling transforms a rare name into a popular one like that. The problem isn’t those out-there variations. It’s the completely expected, almost obvious alternate spellings.

Elliot and Elliott rank #208 and #213, respectively. Combined, the name climbs to just outside the US Top 100. Jackson, Jaxon, and Jaxson become the #1 name for boys.

Let’s return to Emery. Lots of names sound like Emery, which might be a problem. It’s also true that several spellings compete. Emory and Emerie both rose in 2015. While they do not appear in the current Top 1000, A- versions, like Amory, might also be used.

The Test: Look at the Social Security Administration list again, this time checking for alternative spellings. The good news is that some very popular names – like Quinn or Roman or Willow – really do have only one spelling.

Many parents bristle at the idea of boy names for girls. And yet, we live in an age when the lines between masculine and feminine names have blurred. The question to ask, then, is how a name used for boys and girls impacts popularity.

That means you’ll hear more of Rowan than you might expect, and around one out of every three Rowans will be a girl.

Some parents prefer that names be clearly gendered, and skip names that trend unisex. Others don’t mind, but might be bothered if their relatively unusual name feels more popular as a result.

The test: Keep that Social Security list open, and look for your favorite name on the boys’ and girls’ lists.

If you’re choosing a really unusual name, it might be reassuring to have the option of a familiar short form. Galileo might be Leo; Adair could become Addie.

There’s a lot to think about when it comes to nicknames, whether you prefer your names nickname-proof or nickname-rich. But if finding a truly unusual name is your goal, then you might want to avoid any rarity that reduces to a familiar short form.

The Test: It’s getting tougher! You’ll have to consider what your favorite name might logically shorten to, and then ponder whether any of the Top 25 names or so might share that nickname.

Popularity Tests: Only in Montana

If you’ve visited more than one part of our great and sprawling nation, you’ll know that name styles in the US vary regionally.

It’s not as dramatic as you might think. The Top Ten names tend to be pretty popular nationwide.

But Skylar makes the girls’ Top Ten in Alabama. In Nevada, Sebastian comes in at #8 for boys. And Wyatt and Ryker are Top Ten favorites in Wyoming.

Think you’re hearing Brielle an awful lot? Possibly you live in Pennsylvania. Surprised that you’re meeting so many Owens? Many you’re in Michigan.

You can check the state-specific data at the Social Security site here. One challenge: if your metro area spans more than one state, you’ll have to use your best guess at how much the data applies to you.

Similar trends occur in other parts of the world, of course. If data is readily available for your state or province or even a large local health system, it’s always a good idea to consider the information.

The Test: Check the state-specific data for your state – and if you live on a border, or in a metro region that spans more than one state, check your neighbors, too.

Naming children is about personal style. We tend to have a lot in common with our loved ones – we like the same books and movies and music, we listen to the same podcasts and shop at the same stores. Add it up, and we also tend to embrace the same baby names. So there is probably an increased chance of duplication – even with relatively uncommon names – amongst your friends and family.

The Test: There just plain isn’t one! Instead, be aware that your favorites will likely be shared by others.

Readers, what tests would you add to this list? Do you think these work?