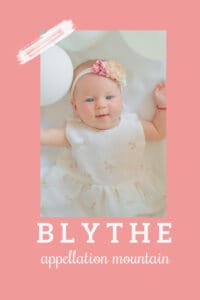 The baby name Blythe feels as cheerful as Felicity, as brief as Blair.

Long before this was a given name, the Old English word blithe meant cheerful or happy.

Blithely survives, occasionally heard as an adverb. It can mean happily, but it can also suggest carelessness.

The baby name Blythe doesn’t feel like a surname name, but it is.

Back in the day, someone known for being joyful and merry might have ended up with the surname Blithe or Blythe.

It’s also possible that it’s related to a forgotten personal name or place name, and there are rivers named Blithe and Blythe in England.

The baby name Blythe has never ranked in the US Top 1000, but it may be better known than some names that have ranked, thanks to a long list of familiar figures.

Emmy and Tony Award-winning actress Blythe Danner might be the most famous bearer of the name. She’s even better known as the mother of her Oscar-winning daughter, fellow actress Gwyneth Paltrow. Gwyneth’s daughter with Chris Martin is named Apple Blythe Allison.

While we’re in Hollywood, Drew Barrymore’s middle name is Blyth. It comes from her family tree. Maurice Barrymore, the patriarch of the famous family and Drew’s great-grandfather, was born Herbert Blyth.

In 1972, Kenner sold Blythe dolls for just one year, but enthusiasts continue to collect and customize the big-headed dollies with eyes that change color.

Chances are that many people first encounter Blythe in literature.

Way back in Shakespeare’s day, the word was used at least occasionally.

Do you remember the song from Much Ado About Nothing? The lyrics urge women to be blithe and bonny. (The clip linked here is from the 1993 movie; but even if you read the text, the words are there.)

Nathaniel Hawthorne’s Blithedale Romance was published in 1852. The story of a utopian farming community, appropriately named Blithedale, it’s likely based on Hawthorne’s real life experiences living in a similar community in real life.

Noël Coward’s Blithe Spirit took its title from a line in a Percy Bysshe Shelley poem, “To a Skylark.”

The play became a smash hit when it debuted in London in 1941; a New York performance followed, as did a musical adaptation, and two movie versions, the most recent in 2020. The story involves a seance gone (hilariously) wrong; the man who hired the medium ends up being haunted by his first wife, to the detriment of his marriage to his second wife.

Of course, none of those stories give us a person named Blythe.

During the 1990s, toy company Kenner launched the Littlest Pet Shop line. They were adorable plastic animals for kids to adopt. Puppies and kittens, yes, but also turtles and bunnies … and eventually animals we don’t keep as pets, like, say elephants.

At some point, the line was acquired by Hasbro.

And on more than one occasion, an animated series was made to bring the toys to life.

In 2012, a new iteration of Littlest Pet Shop introduced Blythe Baxter, a girl who lives in an apartment high rise, above the Pet Shop. The shop is now also a pet daycare. (Because you couldn’t sell the series regulars every few episodes, right?)

Somehow, Blythe acquires Dr. Doolittle-like abilities to talk to the animals. For four seasons, Blythe helps out at the store as they manage various challenges, including fending off a bigger pet store’s wish to drive the Littlest Pet Shop out of business.

The baby name Blythe has never appeared in the US Top 1000.

But it has increased in use over the years.

While a handful of boys have already received the name – just like nearly any surname – it’s also true that Blythe has a longer history as a girl’s name.

In 1974, as Blythe Danner’s career hit its stride, the name rose in use.

But it was The Littlest Pet Shop that really set Blythe soaring. At peak, in 2013, 174 girls received the name.

It’s slowed down since the fictional character left the screen, and just 96 Blythes were born in 2021.

Still, the name fits with so many current favorites. If you love Blake, Blanche, Brynn, Britt, or even Bree for a daughter, Blythe is an alternative.

The meaning is great – and both obvious and rather subtle at the same time.

If you’re following Netflix’s psychological thriller You, there was a minor character by the name during the first season.

All of this makes the baby name Blythe a joyful, vintage gem. It’s brief and complete. The meaning is richly appealing. And it manages to straddle the antique/modern divide with grace and style.

If you’re looking for a distinctive, timeless, and unexpected name for a daughter, Blythe might be the right choice.

What do you think of the baby name Blythe?

Originally published on September 15, 2010, this post was revised substantially and re-published on November 9, 2022. 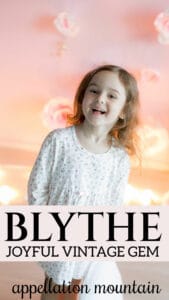 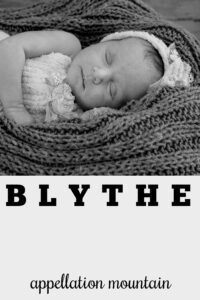