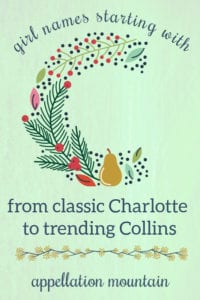 Let’s look at the girl names starting with C – from the most popular choices, to the ones that might be new to you.

Of course, C names are popular in their own right. As of 2021, it’s the sixth most popular first initial for girls’ names.

Nora’s rhyming sister, Cora went from sometimes-heard to everywhere, thanks to the Countess of Grantham, the kind-hearted Cora of Downton Abbey. While it has several possible origins, the most frequently cited is Greek, with the meaning maiden.

Classic Katherine has staying power, and we’ve been wild about Katherine names like Kaitlyn, too. Catalina, the Spanish form of the name, sounds like a sister for Isabella, an alternative to Camila.

The first of several Charlee spellings parents use for their daughters.

The French form of Camila, Camille feels just different enough. As tailored as Madeline, Camille is a compact, sophisticated option for a daughter.

The cattleya is an orchid. It morphed into Cataleya as a given name, and rose in use following Zoe Saldana’s turn as Cataleya in 2011 movie Colombiana.

Camila is the fast-rising favorite, leaving the double-L spelling much farther back in the rankings.

While the K version of this name is more popular today, Catherine has been on top in the past – and it’s a perfectly reasonable choice for a daughter.

It’s likely just a slimmed-down spelling of Callie, but Cali also looks like a short form of California.

One more way to spell Charlie, also rising in the rankings.

Sleek and sophisticated, this French name brings to mind singer Celine Dion. It’s ultimately of Latin origin, related to the word for heaven, though you might also think of Selene, from the Greek word for moon.

We all recognize tailored, vaguely French Colette – even though few of us are using it.

Cameron is more popular for boys; Camryn, for girls. But we’re still hearing plenty of Cameron for our daughters, too.

An Irish surname name, Cassidy caught on for girls in the 1990s, along with similar three-syllable names like Courtney and Brittany.

The fourth spelling of Charlie on this list – and in the US Top 500!

A favorite for our sons, rising in use for girls, too. Unisex names continue to be favorites, across the alphabet.

Another spelling option for Cecilia, this one clearly leading to nickname Cece.

A musical name in the key of Penelope, Calliope is rising in use quickly.

Tally up all of the Charlie spellings, and this name is more popular than it initially appears.

A place name of Italian origin, Capri is known for its natural beauty.

It’s a little bit of a mom name today, but really, this feminine form of Christopher ought to be considered a classic.

A place name associated with neighborhoods in London and New York, Chelsea peaked in the 1990s, way before Brooklyn.

A Hebrew name with a pan-global vibe, Chaya offers a great meaning: life.

Inspired by the name of a Native American tribe.

Short for Carla or Caroline – or maybe even Charlotte – there’s something about Carly. While it peaked in the 1990s, it fits in with surname-style names like Riley.

A musical possibility, Cadence updates Catherine. Fun fact: it surged in use following 2003’s American Wedding, featuring a young January Jones as the sister of the bride.

A Hebrew form of Hannah.

Recently returned to the US Top 1000, Cleo combines the mystique of the ancient Egyptian queen with a cool, modern sound.

Cindy is stuck sharing a room with Jan and Marcia, but Cynthia? In our age of Olivia and Sienna and Thea, it sounds like it could fit right in.

A surname made famous by a designer, Chanel’s recent burst of popularity might have more to do with a handful of reality stars and young actors/models by the name.

Traditionally considered the English spelling, even though French Claire is far more popular in the US.

Lucky Clover sounds upbeat and might honor family ties to Ireland. It’s a recent arrival in the US Top 1000.

A surname name associated with candlemakers … and Friends.

Part of the Christina-Kristin block of names from an earlier generation, today Crystal fits right in with Ruby and other word name possibilities.

A place name more popular for boys, but every bit as wearable for our daughters.

An unexpected option in the key of Penelope, with a great meaning: beautiful flower.

From a poetic name for Scotland.

Along with Velvet, Lace, and Dimity, a fabric name that might just work.

Another mythological name, and a musical one, too.

A poetic name for Wales.

Inspired by the jewelry.

After briefly leaving the US Top 1000, Cara is back. Credit might go to The Mandalorian’s Cara Dune. (In the character’s case, it’s short for Carasynthia.)

A Dutch name of Greek origin, Carice is derived from Charis – grace.

Classic Charles started out as Germanic Karl, with Karla as the feminine form. Vintage and unexpected Carlotta is an Italian take on Karla, energetic and high-stepping.

A name with Hebrew origins, Carmel looks a little like sweet caramel, but it means garden.

While the origin is debated, Casilda’s roots run deep. An eleventh century patron saint of Toledo, Spain answered to the name.

From a type of tree, known as a source of cinnamon.

Kate is a familiar classic. So is Catherine. But Cate is all Cate Blanchett, a sophisticated and unexpected take on the beloved name.

Lacy, elaborate Cecily was a medieval English take on Cecilia. It remains relatively rare today – as does the tailored, French Cecile.

The Roman goddess of agriculture, and a goddess name still undiscovered by modern parents.

The French word for cherry, Cerise feels more like a color name in English.

Borrowed from the surname of the famous French painter.

A French surname associated with a saint, as well as the word chant – song.

From the Greek word for grace. In myth, the Graces – or Charites – were goddess in charge of all things related to beauty and charm.

A virtue name with a sepia-toned, antique appeal.

A South African feminine form of Charles, made famous by actor Charlize Theron.

A rare name from the Greek word for delight.

A whole cluster of names contributed to the popularity of this twentieth century innovation. It’s likely derived from the French cherie – darling, but it also looks something like Charlotte and so many Charles names, as well as other girls’ names ending with L.

A name of Italian origin, Chiara is the original form of Claire in that language.

It’s easy to mix up Chiara and Ciara – and Keira and Sierra, too. But Ciara comes from Irish origin, and means dark.

Originally from an Aztec name meaning star, Citlali is most popular with Mexican-American parents.

Another rare find from Greek myth, more wearable thanks to the success of Chloe and company.

A Claire elaboration that might still bring to mind Silence of the Lambs, but has plenty of potential nonetheless. Lots of other Claire names could fit on this list, too.

An ancient name, Claudia feels strong and determined – qualities we prize in our daughters. Claudette is another Claud- possibility.

Another Greek possibility, Clytie means famous or noble. The original Clytie was an ocean nymph; the name has been well-used in literarture since then, but only rarely for real girls.

A sparky French nickname-name that now stands on its own.

Once a favorite with Irish-American families, Colleen means girl.

A Spanish name taking from a title of the Virgin Mary – Our Lady of Consolation. Gilded Age heiress and socialite Consuelo Vanderbilt lends the name some vintage glam.

An Italian title, Contessa shortens to Tess, which makes it far more accessible than, say, Margravine.

The French form of Coralia, an all-but forgotten Greek origin name, Coralie seems like a substitute for Rosalie.

From the Spanish word for heart.

An obscure, but lovely, name from a Spanish medieval legend.

Tailored and unexpected, with an upbeat meaning: cheerful.

An ancient Roman name with plenty of potential.

A feminine form of Cosmo, with the same meaning: universal.

As in the shape, and also a reference to the moon.

Another ancient name, this time made familiar by Shakespeare. 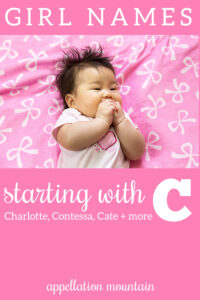 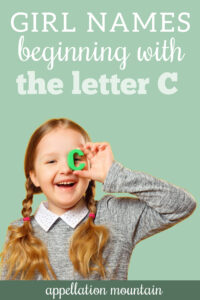 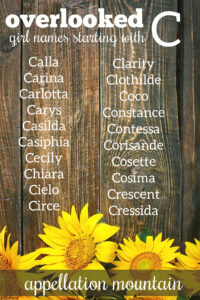