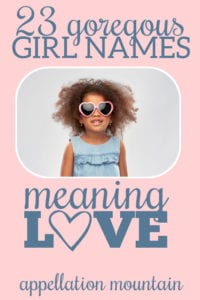 If meaning matters, love feels like one of the most obvious choices. It almost belongs with virtue names, like Patience and True. But love feels bigger than many of those name meanings.

A name that means love is a promise and a wish.

Plenty of popular choices can claim this meaning: Mabel and Amy, as well as rising star Esme.

But for every familiar favorite, there are girl names meaning love outside the current US Top 1000. Many of them have never ranked on the popularity charts. A few of these might be eyebrow-raisingly different.

Whether you’re looking for mainstream girl names meaning love, or something more unusual, this list has them all.

Ahava means love in Hebrew; it’s also the name of a river mentioned in the Old Testament. While it’s seldom heard in the US, the combination of a great meaning and a Biblical reference point makes it accessible.

Amy soared into the US Top Ten in 1969, and stayed there into the early 80s. That puts the mini name ahead of Mia, Ava, and Zoe. It comes from a French word meaning beloved, and so it’s no surprise that the French spelling, Aimee, also rose in use in the 1970s.

In Latin, amanda means lovable. The masculine Amandus was heard in the Middle Ages, but Amanda is little heard until the 1600s. Playwright Colley Cibber gave the name to a virtuous wife in 1696 comedy Love’s Last Shift. It’s packed with significant word names: Sly, Narcissa, Elder Worthy. Over the centuries, the tie between the meaning and the name has become less obvious, but it’s still there.

An Italian word meaning “I loved,” Amavi recently debuted in the US popularity data.

Edmund Spenser invented many names for The Faerie Queene. Amoret comes from the Latin amor – love. She’s a bride in the poem, representing married love. Girls’ names ending in -et and -ette, like Scarlett and Juliet, are popular, so why not Amoret? Craft blogger Rubyellen at Cakies named her youngest daughter Glow Amorette.

If you know your Welsh legend and myth, Angharad should ring a bell. It’s pronounced almost like it looks: an HAR ad. There’s a hint of a ‘g’ in the first syllable, too, but only a hint. It means more love or much love. It remains in use in Wales, and fiction makes it familiar to an even wider audience.

If you’ve heard the Italian phrase cara mia, you know that this name means love. (The mia part means my.) Cara peaked in the 1980s, but never broke into the Top 100. The Mandalorian made Cara short for Carasynthia. Spell it with a K, and Kara is familiar to Supergirl fans – and more popular than the C spelling, though both are relatively rare.

Stargazers might recognize Carina as a constellation, the keel of Jason’s mythological ship, the Argo. Kaya Scodelario played an astronomer named Carina in the Pirates of the Caribbean franchise, reinforcing the idea. But it also serves as a form of Cara, which brings it back to love.

Catherine Zeta-Jones and Michael Douglas named their daughter Carys back in 2003. Mom is Welsh, and Carys comes from the Welsh caru – love. It’s more common in the UK than the US, where it has never appeared in the Top 1000.

Corazón is the Spanish word for heart, making it a natural fit for a list of girl names that mean love. Instead of romantic roots, Corazon reads religious, from the Immaculate Heart of Mary: Inmaculado Corazón de María. It’s been used for girls in the US in small numbers since the 1930s, which makes this rare, but accessible.

If Cordelia comes from Shakespeare’s character, who in turn was borrowed from Geoffrey of Monmouth’s not-quite-historical History of the Kings of Britain, then it has another, uncertain, origin and meaning. But Cordelia is also associated with the Latin cordula – heart. That puts the name of this list of girl names meaning love.

David is an impeccable classic, nearly as evergreen as James and John. But none of the feminine forms of David have really caught on in the US. Scottish Davina shares the middle ‘v’ of Ava and Olivia, suggesting it’s very on-trend. And the meaning is great, too – David comes from a Hebrew word meaning beloved.

A few years ago, a parent asked about Elska in a #namehelp post. Elska means love in Old Norse. (More or less. There’s a lot to this story!) Quirky-cool Elska is almost unknown in the US, but it has potential – especially because of this lovely meaning.

JD Salinger used Esme for a character way back in 1950. Then came 2005’s Twilight, also with an Esme – this time, the loving matriarch of an unusual vampire family. Esme comes from Scotland, where it developed from an Old French word meaning loved or esteemed.

Invented for the movie 10,000 BC, Evolet looks like a mash-up of Eve and all of the -et ending girl names. Except Evolet probably means “the love.” (Read it backwards … sort of.) In the movie, she’s the love interest of the hero. That meaning puts Evolet on this list, and maybe on your daughter’s birth certificate, too.

Kalila comes from an Arabic word meaning beloved – or perhaps lover. The name appears in The Panchatantra, a collection of ancient fables about animals. Given our affection for Lila, Layla, and Delilah, it makes sense that this lovely name with a great meaning could attract more attention.

Kerensa means love in Cornish. It’s taken straight from the dictionary. British Baby Names traces the name’s usage to the nineteenth century, but in the US, it was first heard in the 1960s. Credit Victoria Holt’s 1965 novel called The Legend of the Seven Virgins. It was the story of a village girl who aimed high. Her name? Kerensa Carlee.

Some would argue that Lennon means John, as in the twentieth century music legend. But the surname Lennon comes from an Irish given name sometimes translated as sweetheart. Like many surname names, it ranks in the US Top 1000 for boys and girls. It’s steadily more popular for girls, and fits neatly on this list.

If you know your baby name pop culture trivia, you’ll remember that 90s sitcom Mad About You used Mabel as an acronym for “Mothers Always Bring Extra Love.” But Mabel’s meaning tracks, too. It comes from the Late Latin name Amabilis – lovable. Amabilis became Amabel, and then just Mabel. (Annabelle, too, probably started out as another spin on Amabel.)

The Slavic milu means gracious or dear. Dear isn’t exactly the same thing as loved, but feels close. A strong meaning is yet another positive for this popular name.

A Zapotec name, Nayeli may come from a phrase meaning “I love you.” It’s a little bit like Jaime, sometimes used because of the French j’aime – I love. Still, there are lots of challenges with using Native American names. Nayeli may be perceived as Latina, since the Zapotec civilization flourished in what’s today known as Oaxaca, Mexico. It’s ranked in the US Top 1000 since the 1990s.

In 1802, the remains of a young woman were found in the catacombs of Rome. Based on the inscription on her tomb, it was believed that she had died a martyr under Diocletian, and that her name was Philomena. Except philomene is the Greek word for loved. Whether it was an error or not, Philomena is still considered a saint, and the name remains familiar but rare. If long, lovely names for girls are your style, this could be one to consider.

Priya means beloved in Sanskrit, and the while the name is common elsewhere, it’s never cracked the US Top 1000. On long-running comedy The Big Bang Theory, Priya is the younger sister to Raj, which may make it more familiar. But the name comes from Hindu legend, making it far older – and more significant.

Thaddeus may come from an Aramaic word meaning heart, which puts the feminine forms – Thaddea and Tadea – on this list.

What are your favorite girl names meaning love? 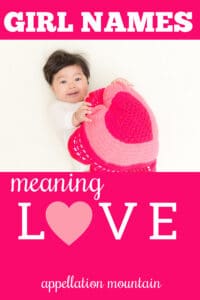 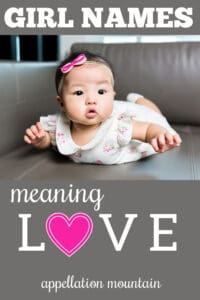