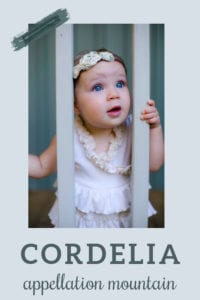 The baby name Cordelia combines a literary pedigree with a vintage sound.

Thanks to Rosy for suggesting our Baby Name of the Day.

The baby name Cordelia sounds like it fits right in with the current US Top 100. Amelia, Valentina, Gabriella, Cordelia.

In fact, the name peaked way back in the nineteenth century, when it regularly appeared in the Top 300.

While everybody recognizes this name, almost no one is using it for their daughters.

The name filtered into use thanks to Geoffrey of Monmouth, the eleventh century author of not-quite-history.

He wrote about Queen Cordeilla. She ruled valiantly, even while her treacherous nephews conspired against her reign.

The author placed Cordeilla’s rule sometime in the eighth or ninth centuries. Except there’s almost no historical evidence that she ever existed.

King Lear had three daughters: Goneril, Regan, and Cordelia. The aging king is ready to hand down his scepter. But, without a son, who should succeed him?

The king poses a question to his three daughters: tell me how much you love me, and I’ll divvy up the kingdom accordingly.

Goneril and Regan kowtow, but Cordelia doesn’t play along. Dad sends her off to marry the King of France as punishment, and her big sisters share the throne.

Things go downhill from there, but the important part is this: Cordelia is Lear’s loyal daughter, a worthy namesake.

So where did Geoffrey of Monmouth – and through him, Spenser and Shakespeare – find the name?

Accounts of the fourth century Saint Ursula also refer to Saint Cordula. It’s said that both women, and their many companions, were martyred near Cologne. Like other cor- names, it’s often connected to the Latin word for heart.

Welsh myth and Arthurian legend give us Creiddylad, the most beautiful girl in all the world. Two suitors vie for her affections. One kidnaps her; the other kidnaps her from the first suitor. King Arthur intervenes, and she’s sent home to her father, Llud Silver Hand. Her would-be husbands are forced to battle each other every May Day.

It’s considered something of a Persephone story, with a struggle between the seasons. And, of course, Persephone is called korë – maiden – which is tempting to tie back to the story. But it’s almost certainly a coincidence.

Regardless of the name’s origins, both the saint and the maiden tend to be associated with the baby name Cordelia over the centuries.

That ought to be enough to cement the baby name Cordelia in the hearts of many!

There’s also a 1904 song titled “Cordelia Malone.” Vaudeville star Billy Murray recorded the hit, at a time when he was one of the best-known singers of his era. He rhymes Malone with telephone – at the time, the height of technological innovation.

Novelist PD James introduced a rookie detective by the name in the 1970s. Cordelia Gray has appeared in various adaptations over the years.

Television gave us a character on The Young and the Restless. But the small screen’s most famous use has to be Buffy the Vampire Slayer’s Cordelia Chase. Joss Whedon, namer extraordinaire, chose it for the privileged cheerleader who finds out that vampires are real – and eventually fights on the side of right, both with Buffy, and later on spin-off Angel.

There’s another small screen reference: American Horror Story’s third season introduced a powerful witch by the name. The season ran from 2013 to 2014, likely explaining the baby name Cordelia’s brief return to the Top 1000.

But that’s the name’s appeal. Even if Cordelia returns to the Top 1000, it will remain far less common than many an elaborate, traditional choice. That makes it a substitute for Ophelia and Cora, too.

There’s a strength to Cordelia, a sound that’s both delicate and resolute – and perfect for a child today.

Would you consider the baby name Cordelia for a daughter?