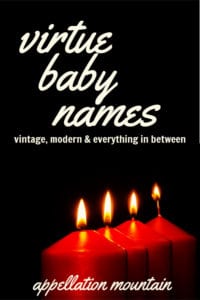 Some are right at home on Plymouth Rock, the kind of names the early colonists chose to set themselves apart. Others are modern innovations, the product of the 1960s counterculture, or twenty-first century families’ search for meaning.

Some might feel tough to live up to. Imagine a toddler named Patience! Others straddle the line between virtuous and bold. Bravery qualifies as a virtue, but it’s a very different vibe than Mercy or Modesty.

I’ve rounded them all up here, choices that might appeal for a baby due around Thanksgiving – or really, any time of year.

No, everyone on the Mayflower wasn’t named Flee-Fornication Constancy Browne. Mostly they were called John. And lots of other bog standard English names. But religious dissenters did embrace some fabulous names, from the downright unwearable to those worthy of consideration today.

Virtue Baby Names: Over the Years

Of course, plenty of names were chosen for their positive meaning ages before Martin Luther nailed his theses to the Wittenberg doors. And many have been in use over the years, quietly.

Language changes. Our ideas about what makes a good life change, too. And so no surprise that, while some of the throswback names remain in use, others fade, and still more are added to the list of possible options.

And recently, I’ve been wondering if all of those bold, even braggadocious boy names are really part of this trend, too.

Virtue Baby Names: So Many!

I’ve written about a bunch of virtue baby names over the years, including:

What are your favorite virtue baby names? Do you like ’em old school, twenty-first century, or somewhere in between? 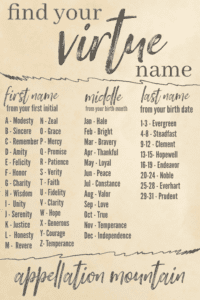