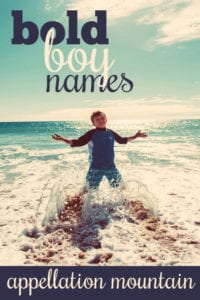 Bold boy names are all the rage.

In 1996’s Feeling Minnesota, Keanu Reeves played Jjaks, a character whose name started out as a typo.

Fast forward to today, and Jax might be the ultimate twenty-first century name for a boy. The name feels brisk and lively, rooted in tradition, but with a completely different vibe. Jack is a man of action; Jax is that same man of action, plus a rocket ship and a ray gun.

If you’re looking for a name that’s short and modern, informal but not incomplete, one of these 25 bold boy names inspired by Jax could be for you.

Ace ties to tennis and playing cards and aviation, too. The name attracted more attention when Jessica Simpson named her son Ace Knute in 2013. It’s bold, but you can find boys by the name way back in the nineteenth century.

In the US, many of us first heard this one when Eddie Murphy played Detroit cop Axel Foley in the Beverly Hills Cop series. It sounds like the axle of a car – what better name for a son of Motor City? But Axel is actually a medieval Scandinavian form of the Biblical name Absalom – my father is peace. This is another of the bold boy names with history. Axel has been used consistently in the US, though in small numbers, and in other parts of the world, it’s a classic.

Do you prefer your bold boy names a little more obscure? Bix could be your name. Borrowed from 1920s jazz musician Leon Bismark Beiderbecke – Bix for short, it’s a punchy, high energy name for a boy. It’s rarely been given to even five boys in a single year, but the rise of Jax and other bold boy names could change that.

If you remember your Inglorious Basterds, Brad Pitt’s character introduces himself as a “direct descent of the mountain man Jim Bridger.” Virginia-born Bridger became a legend in the American West, a trapper, scout, and guide who blazed new pathways through the wilderness. Plenty of places are named in his honor, and the surname is especially popular as a given name in Utah, Minnesota, Wyoming, and Idaho.

Cash has a lot of bravado, borrowed from country music legend Johnny Cash. The name has some history over the years, but got a big boost from 2005 Oscar-nominated movie Walk the Line, starring Joaquin Phoenix as the singer. If Cash feels a little too bold, it might be short for names like Cassian or Cashel.

Cruz makes the bold names for boys list on sound, but this Spanish surname has a spiritual meaning – cross. It has a long history of sparing use for boys and girls, doubtless inspired by the meaning as well as the surname. Cruz has gone from rarity to mainstream name in the twenty-first century.

Part-action verb baby name, part-literary choice, Dash first caught parents’ attention with 2004 Disney-Pixar flick The Incredibles. Older son Dash – Dashiell – Parr, gifted with super-speed, made the name seem appealing for a child. In 2003, there were eight boys named Dash. By 2014, there were 220 – enough for the name to break into the US Top 1000. Dashiell, which brings to mind detective writer Dashiell Hammett of Nick and Nora and The Maltese Falcon fame, has risen, too – though not as high.

Actor and comedian Dax Shepard says that his unusual name came from a character in Harold Robbins’ 1960 novel The Adventurers. (It was the character’s nickname, derived from his full name: Diogenes Alejandro Xenos.) That tracks with the name’s early use. In 1967, there were ten boys given the name. By the mid-1970s, following a movie adaptation, that number rose to over 100. As the novel faded, so did the name. The actor gets credit for the resurgence of Dax as one of the bold boy names of the twenty-first century.

Dex could be short for Dexter, Declan, or maybe even Alexander. But in an age of bold names for boys, Dex might also stand on its own. There were 32 boys given the name in 2014 – a new high. Some credit might go to 2009 David Nicholls novel One Day, as well as the 2011 film adaptation starting Anne Hathaway and Jim Sturgess. Sturgess played Dexter – almost always referred to as Dex.

If Axel is a boy’s name, why not the equally auto-centric Diesel? It’s the surname of the inventor of the diesel engine, of course, and a cousin to the equally German Dietrich. But the surname’s popularity is tied to the rise of actor Vin Diesel – born Mark Sinclair. In 2001, the first installment of The Fast and the Furious debuted, making the actor a household name – and the series just keeps going.

This borrowing from the animal kingdom first started to catch on in the 1990s, when David Duchovy starred as FBI agent Fox Mulder on The X-Files. Today, Fox fits with bold names for boys, like Jax, but also more traditional x names, like Max and Felix.

Geo is the traditional abbreviation for George – so at least some of the nineteenth and early twentieth century Geos listed in the data were probably called George. But Gio is used as a nickname for Giovanni, and it could stand on its own – a fresher alternative to Leo. Nickelodeon’s animated series Team Umizoomi included a Geo.

Rock star surnames are a popular category in recent years. They range from gentle Lennon to swaggering Jagger. Jagger feels rough and jagged, a brother for Jax or Ace or other bold names for boys.

The name that inspired this list! While Jack has a rich and varied history, Jax was first given to five boys in a single year in 1995. The name seems to owe its early success to a character first introduced in 1993’s Mortal Kombat II. Jackson Briggs was a former US Special Forces officer, better known as Jax. In 1995, five boys were given the name. The character has been popular ever since, but the name’s popularity has long since outstripped the video game character.

Jett can be a surname with French or German roots, and jet is a black gemstone popular with the Victorians. The term “jet age” has been around since the 1940s, but a handful of boys were named Jett way back in the nineteenth century. Still, Jett mostly brings to mind the wild blue yonder, and even though air travel has become routine, it still feels like one of the bold names for boys.

Kai has a bright, upbeat sound, and a nicely international pedigree. But the meaning that is usually associated with Kai is from the Hawaiian – sea. It conjures up calm waters, but also the athletic feats of surfers.

Keir has a long history of sparing use. It was popular back in 1970, when actor Keir Dullea was at his most famous. It could be a Scottish surname or an alternate spelling of the Irish Ciar. Along with Bix, it’s one of the least-used of the bold names for boys on this list.

Neo sounds like traditional name Leo, and comes from a Latin word meaning new, as in neophyte and neonatal. But Neo feels very space age, thanks to The Matrix’s Thomas Anderson – better known as Neo, also called The One, and famously played by Keanu Reeves in a trilogy of movies between 1999 and 2003.

Oh, those trend-setting Jolie-Pitt kids! Pax is the second eldest son, and his name comes from the Latin word for peace. Pax was the Roman goddess of peace, making this one of the rare cases of a feminine name transferred to almost exclusively masculine use. Other Jolie-Pitt kid names, like Maddox, Knox, and Vivienne, have inspired thousands of namesakes. Pax has had more modest success.

A ranger was originally a gamekeeper, but now it’s more likely to be associated with the wilderness – as in park rangers – or possibly the Wild West’s Lone Ranger.

Rocket has been a headline-making celebrity baby name. Director Robert Rodriguez has children named Rocket, Racer, Rebel, Rogue, and lone daughter, Rhiannon. Pharrell’s son is Rocket. And actors Sam Worthington and Laura Bingle have a Rocket, too. Pharrell explains the name’s appeal perfectly: a rocket is “meant to ascend,” plus nods to songs by Stevie Wonder, Elton John, and Herbie Hancock. As Oprah said, it’s a name for a kid who is “born to soar.”

Believe it or not, Rogue boasts an entry in the Dictionary of Medieval Names from European Sources. Yes, it has been used as a personal name as far back as 1392. It comes from a word meaning crow, making Rogue yet another animal-related name, something that’s quite common through the ages. The word as we know it traces to the sixteenth century. So while most parents who choose Rogue are probably thinking of the word’s mischievous and independent aspects, there’s more history to this one that you’d ever guess.

It could be short for Alexander. It’s occasionally listed as a form of John. There’s also The Wonder Twins, a 1970s creation for animated superhero series Super Friends. They spelled the character’s name Zan. There’s also Xan Richard Anders Windsor, Lord Culloden, currently in line to the British throne. His dad is Alexander – and also the Earl of Ulster – so perhaps Xan is a nod to him.

Wilder also appears on the list of preppy hellraiser names, and it fits in both places. It’s as outdoorsy as Parker, but not as buttoned-down as William. And Wilder could go, well, wild. The surname name has caught on quickly in recent years.

Zeke is short for Zechariah and Ezekiel, names with deep roots. And Zeke has a long history of sparing use. But Zeke as an independent name is currently more popular than ever, and sounds like a brother for Jax.

What are your favorite bold names for boys? Would you consider any of these name for a son? 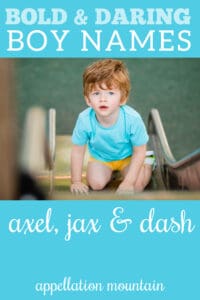 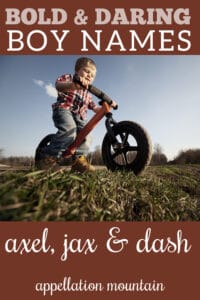